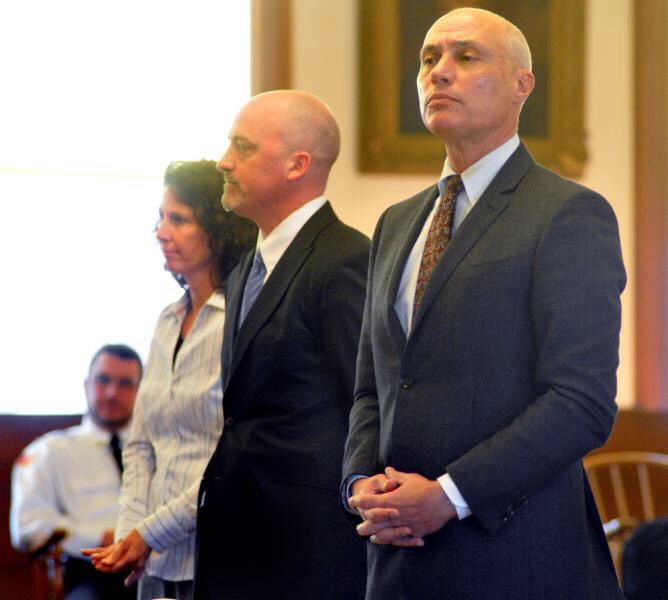 by DAN CROWLEY
Daily Hampshire Gazette
NORTHAMPTON — Whether murder suspect Cara Rintala will face a third trial rests with the state Supreme Judicial Court, which heard arguments Monday in an appeal of the prosecution’s case against Rintala, accused of strangling her wife, Annamarie Rintala, in their Granby home in March 2010.
Prosecutors are seeking a third trial for Rintala after juries deadlocked in 2013 and 2014 when they were unable to reach a unanimous verdict. Her defense attorney, David P. Hoose of Northampton, wants the court to enter a finding of not guilty on grounds that there is insufficient evidence to conduct a third trial.
“The sole issue is whether the Commonwealth introduced sufficient evidence to sustain a conviction at the time it rested its case,” Hoose wrote in his brief to the court.
Hoose argues that the state’s case against Cara Rintala “was entirely circumstantial,” and that its proof established only that she had an opportunity to commit the crime.
“But proof that she could have committed the crime is not the same as proof that she did in fact do so,” his brief states.
A trial court judge and a single SJC justice denied earlier appeals by Hoose, which he subsequently brought to the full Supreme Judicial Court. The state’s highest court rules on most cases within 130 days of oral arguments and has taken the case under advisement.
Cara Rintala attended the Supreme Judicial Court proceedings in Boston with her parents and other family members. The hearing was webcast.
In his allotted 10 minutes before the court Monday in Boston, Hoose drew attention to issues of motive, means and opportunity to commit the crime as well as “consciousness of guilt.” He raised questions about inferences jurors were asked to draw from evidence presented by prosecutors, which he described as a “house of cards” in his brief.
“The inferences used by the commonwealth are stacked one on top of another to where they are no longer reasonable,” Hoose told the court. “The inferences have to be reasonable.”
Rintala has pleaded not guilty to a charge of first-degree murder, maintaining she was running errands with her daughter when her wife was killed. She has been free on $150,000 bail since February 2014. As part of her bail conditions, she must remain in western Massachusetts.
First Northwestern Assistant District Attorney Steven E. Gagne told the court Monday that the evidence presented against Rintala and inferences drawn from it are sufficient to warrant a guilty finding. He was joined in Boston by Assistant District Attorney Jennifer Suhl.
During his argument before the court Monday, Gagne focused on Annamarie Rintala’s time of death as determined by a medical examiner and Cara Rintala’s statements in interviews that suggest she was at home at the time her wife was killed on March 29, 2010.
It is some of the prosecution’s strongest evidence in connecting Cara Rintala to the crime, he told the justices.
“The evidence is sufficient for the jury to conclude the defendant was with the victim when she died,” Gagne told the court, noting that Annamarie Rintala died, “well before Cara Rintala, by her own admission, left the house that day.”
Gagne argued in his court brief that there was sufficient evidence to establish a motive, and means and opportunity for Cara Rintala to commit the crime — and that she displayed consciousness of guilt “in her statements to the police, her disposal of evidence, and the staging of the crime scene.”
“There was ample evidence of consciousness of guilt,” Gagne told the justices.
Dan Crowley can be reached at [email protected]