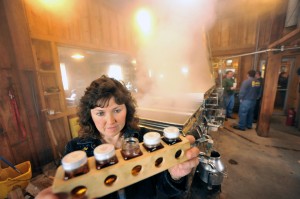 An inspector at the Pomeroy Sugar House in Westfield checks the color of a batch of syrup. (File photo by Frederick Gore)

WESTFIELD – Despite the arrival of spring today, the temperatures remain chilly, not only prolonging the winter blues, but also putting a slow freeze on the maple season.
Maple season starts at the end of February in a typical year but temperatures have been too low for the sap to drip out and this winter has had more snowfall and lower temperatures than normal.
Many farms have yet to start tapping their trees, said Winton Pitcoff, coordinator for the Massachusetts Maple Production Association. “It’s too soon to say whether the late start will affect the overall maple season, which ends in April.” 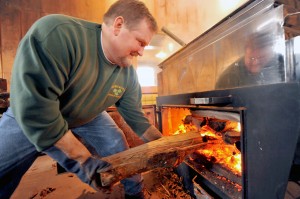 “We could still have a very good season,” Pitcoff said. “There have been many seasons where it didn’t start until late into March.”
Drastically fluctuating weather would be bad news, he said. A gradual warm-up is best for maple sugar production.
Last year, Massachusetts produced about 63,000 gallons of syrup, ranking ninth in maple production nationwide. Vermont produced the most with 1.3 million gallons.
Other states are struggling, too. The cold weather has pushed back the start of the season in neighboring Connecticut, New Hampshire, New York and elsewhere. 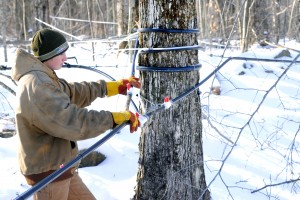 “Basically there’s been a delay,” said Joyce Ripley, owner of Granville’s Maple Corner Farm. “We just have to wait for the weather. It all depends on the temperature”.
For optimum sap harvesting temperatures at night should be ideally around 25°F – 28°F and then sunny during the day, around 40°F.
Pomeroy Sugar House in Westfield just starting boiling a week ago, almost a month behind schedule.
“It has been just way too cold,” said owner Randy Pomeroy. “It’s the middle of the season and we’re just starting out.”
This delay has also shortened the window farmers have to produce,typically only five to six weeks.
“The five to six week window ends when the holes drilled in the trees heal over,” Pomeroy said. “Then the season is done.”
Despite these setbacks there is still time to enjoy the remainder of the maple season, featuring maple products ranging from maple candies and sweets to the classic maple syrup with pancakes and waffles.
If you can’t make it to a sugar house yourself, the Southwick Senior Center is hosting a trip to see how maple sugar is made at the Maple Corner Farm Sugar House on March 29.
“After tapping the trees we boil it down and then put it into containers,” Ripley said. “We get lots of visitors. We have lots of syrup sold and people look forward to the season.”
If interested in visiting, Maple Corner Farm Sugar House is located on 794 Beech Hill Road in Granville and Pomeroy Sugar House is located on 491 Russellville Road in Westfield.