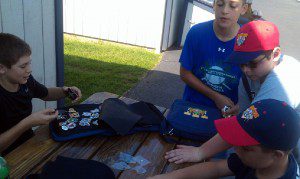 Players look over their Cooperstown pins.

The Westfield Terminators 12U baseball squad traveled to Upstate New York on August 17 to participate in a youth baseball tournament at the Cooperstown DreamsPark complex. A total of 104 teams from all over the United States competed in the weekly tournament that featured some of the most competitive baseball played at the 12 and under level in this country.
In addition to the tremendous baseball played on the 22 diamonds at DreamsPark, the boys lived on campus in the team barracks for the week, interfaced with boys their own age from different parts of the country, and participated in the trading/collection of pins from each of the 104 teams that were up in Cooperstown.
This was the Terminators third visit to Cooperstown and they were pleased to achieve two milestones on the trip, their first tournament victory and their first playoff victory. Westfield defeated the NorthShore (Mass.) Rebels 17-3 on Tuesday and followed that up with a 14-1 playoff victory on Wednesday in their game against the (New Hampshire) Team “Get It Done”. 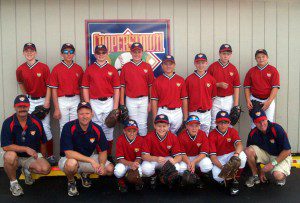 In terms of individual player milestones, three Terminator players hit their first home runs up in the Cooperstown. Pitching depth, versatility and big defensive plays was the trademark of the 2012 version of the Terminators.
The team wishes to thank Terminator founders Ray Neilsen and Harry Sinkewicz for their vision and hard work in starting the organization. In addition, the Terminators extend a sincere thank you to the many families and businesses that offered financial assistance to get them to Cooperstown and achieve their goals.

Courtesy of the Westfield Terminators