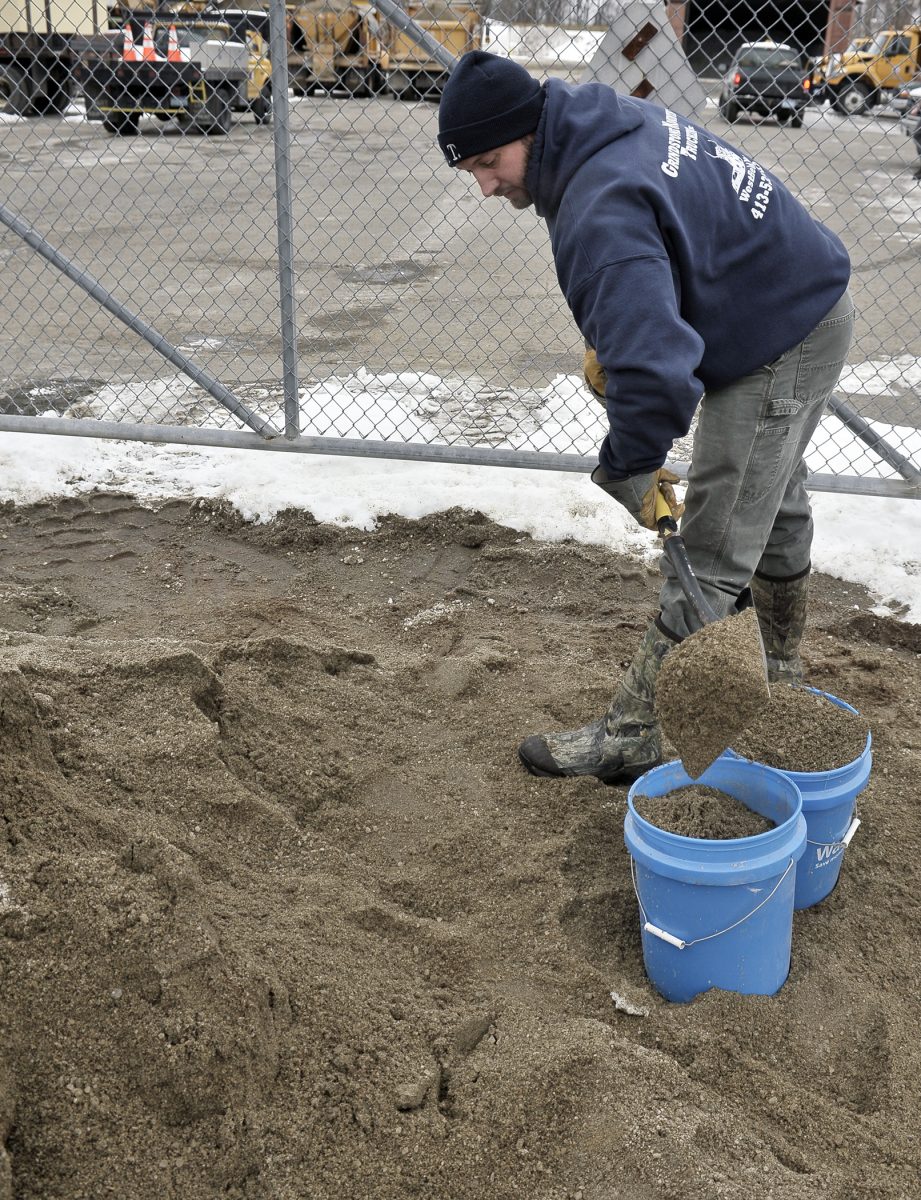 BOB SALSBERG, Associated Press
FRAMINGHAM (AP) — New England is bracing for a blockbuster blizzard that’s threatening more than 2 feet of snow, hurricane-force winds, coastal flooding and widespread power outages. A look at how the storm might impact Massachusetts and what is being done to prepare:
PILING UP
In declaring a state of emergency, Gov. Charlie Baker said based on forecasts the blizzard has the potential to be a “top 5” all-time storm in terms of snowfall. Forecasters say once the storm gets rolling late Monday and into Tuesday, snow could fall at a rate of 2 to 4 inches an hour, with blowing and drifting and damaging winds. Forecasters expect total accumulations could range from 2 to 3 feet around the state.
COASTAL CONCERNS
From Cape Ann to Cape Cod and the islands, residents along the Massachusetts coast are bracing for a powerful storm surge and the possibility of damaging flooding and beach erosion. The National Weather Service has posted a coastal flood warning for high tide from 3 a.m. to 7 a.m. Tuesday, with a flood watch remaining in effect for the afternoon high tide. Forecasters are expecting a storm surge of up to 3 1/2 feet and 25-foot offshore waves at high tide. In most areas, forecasters are expecting moderate flooding of shore roads and basements, but in some isolated areas, the effects could be more severe, including the possibility of structural damage to homes. Officials said it would be up to local communities to decide if mandatory evacuations become necessary. Some communities plan to open shelters.
TREACHEROUS TRAVEL
Baker issued a state of emergency and ordered an indefinite ban on all nonessential motor vehicle travel starting at midnight Tuesday to help keep roads clear for snow removal crews. The governor said the travel ban was a “last resort” but one that was warranted under the circumstances. The MBTA will also suspend all public transportation services at midnight. Exceptions will be made for the travel ban, including for hospital and certain other health care workers. State Police Col. Timothy Alben said violators could face fines of up to $500, but based on responses to similar orders in the past, he does not expect many people to ignore the order. The Massachusetts Department of Transportation says it is ready for the approaching blizzard, with more than 4,000 road crews, 250,000 tons of salt and 420,000 gallons of deicing liquid.
POWER OUTAGES
Baker said power outages could number in the hundreds of thousands, and it could take several days to restore power. Forecasters are expecting wind gusts of 25 to 45 mph in the central part of the state and approaching hurricane-force winds of 75 to 80 mph on Cape Cod and the islands. National Grid and NStar say they are prepositioning additional crews and equipment in areas most likely to be affected. Otis Air National Guard Base on Cape Cod will be ready to house additional utility crews that could be brought in from other parts of the country. The Massachusetts Emergency Management Agency said people should have an emergency kit available that includes flashlights and extra batteries, a first aid kit, essential medicines and a supply of nonperishable food.
FLIGHTS GROUNDED
Officials at Boston’s Logan International Airport say no flights will be allowed to take off or land during the height of the blizzard. The last flight out of Logan is expected to leave at about 7:30 p.m. Monday, and flights Tuesday are scratched. Massport aviation director Ed Freni said the goal is to resume airport operations Wednesday. Logan handles about 1,000 flights per day.
TRIALS POSTPONED
The blockbuster storm is slowing down two closely watched trials in Massachusetts. U.S. District Court Judge George O’Toole said Monday that prospective jurors in the trial of Boston Marathon bombing suspect Dzhokhar Tsarnaev would not be called Tuesday and it was “iffy” if the jury selection process would resume Wednesday. Bristol County Superior Court Judge Susan Garsh, meanwhile, said opening statements that had initially been expected Tuesday in the murder trial of former New England Patriots tight end Aaron Hernandez would be postponed until Thursday.
IN THE BUNKER
The state’s response to the storm is being coordinated from the MEMA bunker in Framingham, where Baker met with emergency officials and briefed reporters Monday. The first-in-the-nation underground emergency operations facility dates to the early 1960s, when President John F. Kennedy decided that states should have facilities to ensure the continuity of state government in the event of a nuclear attack. Approximately an acre in size, the bunker is 30 to 40 feet below ground with outer walls of reinforced concrete, 18 to 24 inches thick. About 300 key state government officials can work there.