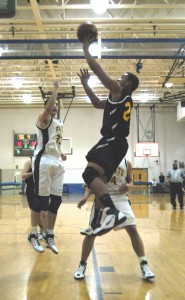 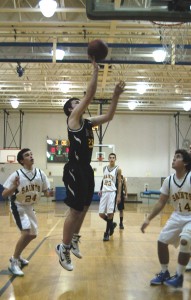 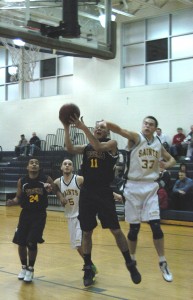 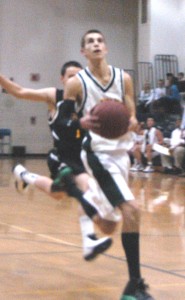 St. Mary’s Matt Plasse breaks away with the ball. (Photo by Chris Putz) 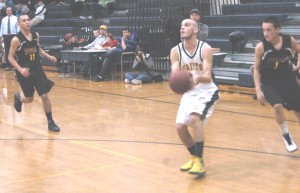 WESTFIELD – For nearly three quarters, the in-town rivalry game between the Westfield Voc-Tech and St. Mary’s high school boys’ basketball teams was a knockdown, drag-out fight between two Tri-County League foes. And then the Tigers’ exploded.
Voc-Tech went on a 33-8 run over the last 10 minutes to win its first game of the season in resounding fashion Wednesday night, 63-42, at Westfield South Middle School. The Tigers are now 1-4.
“We got the monkey off our back,” Westfield Voc-Tech coach Kyle Dulude said. “Hopefully, now we can relax, settle down, and play the way we can.”
Trailing 30-24 midway through the third quarter, Voc-Tech settled onto the free throw line for four free throws – two each from Logun Vanveldhuizen and Henry Deaza – courtesy of a foul and subsequent technical. The Tigers made six of seven from the stripe to knot the game at 30-30 with 2:57 remaining in the quarter.
St. Mary’s regained a 4-point lead with a Kibbe Bryce putback and Lucas Jez breakaway lay-up. But Voc-Tech responded with a furious rally, applying defensive pressure, forcing turnovers, and dumping the ball in low to the two big men – Vanveldhuizen and Deaza – who finished with 20 and 13 points, respectively.
“I like the way we moved (the ball),” said St. Mary coach Tom Sheridan, “but that half court trap – we had trouble getting around it. …Then they played a box-and-one on us.”
Westfield Voc-Tech held St. Mary to just one field goal in the fourth quarter, a shot from Mike Sheridan (10 points) with 1:26 left.
The Saints’ coach said he counted 28 turnovers made by his team. “That’s the difference. That’s the game,” he said.
Matt Plasse, who knocked down a couple of early 3s, finished with 14 points for St. Mary’s (1-4). Voc-Tech’s Bryan Robles also had 14.
“It was nice to play two games in a row,” said Dulude, whose team had a 21-day layoff around the holidays. “We fed off that. We played hard the whole time out there. Our discipline improved. And we were mentally tougher today.”
GIRLS’ HOOPS
Palmer 53, Southwick-Tolland 27
Melissa O’Neill scored a team-high 12 points for Southwick (4-3).
JV GIRLS’ HOOPS
Palmer 29, Southwick-Tolland 14
Southwick’s Jacqui Richard finished with five points.