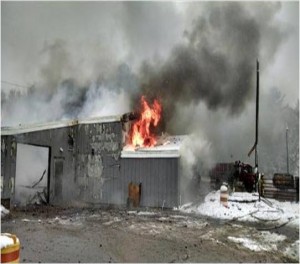 TOLLAND – A fire destroyed the DPW building and equipment parked inside on Sunday afternoon. Tolland Fire Chief Eric Munson said Monday that the fire is out, and the state fire marshal has been there and is continuing to investigate the cause.
Eleven towns responded to the fire, including three from Connecticut.

The fire is a devastating blow to the town, with an estimated cost total cost to the town of upwards of $2 million, half for equipment, according to Munson. 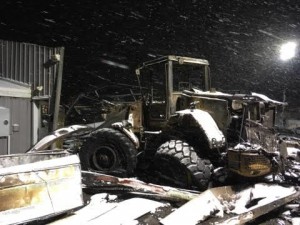 “Winter is here. It’s pretty devastating for the town as a whole,” he said.
An emergency meeting has been called for 5 p.m. Monday in the Board of Selectmen’s office to consider next steps. The fire chief, insurance companies, and other towns will also be there.
“The town will move on. Obviously, we’ll be looking for help,” Munson said.

Munson said the towns of Granville and Becket have already offered to lend Tolland plow trucks.

“Our neighbors have been generous with their help and assistance. That’s the way it is in the hilltowns,” he said. He added that the equipment can be replaced quickly, but not the building.
“It’s not the time of year to start a construction project,” Munson said.

The building that burned down used to house the DPW and Fire Department. Four years ago, the town built a new public safety complex, and spent $600,000 to renovate the DPW building at that time.

Munson said the last devastating fire in Tolland of this nature was in 1976 when he was a boy, and the town hall burned down.