WESTFIELD–The residents on and around Paper Mill Road have had enough. The truck traffic, they say, has to go.

The Westfield Traffic Commission met last night and drew a large crowd, which featured almost two dozen residents from the Paper Mill Road area who have become frustrated with the large trucks that use the road for regular travel. They claimed that the traffic creates excessive noise and other issues, and also claim that safety is becoming a concern, as well.

The traffic commission has been investigating the issue since it was first brought to their attention by Ward 6 City Councilor Bill Onyski, who was also in attendance.

“They start very early, at 4:30 in the morning and they don’t honor the 20 MPH speed limit,” Jean Moulton of Paper Mill Road said at the meeting. 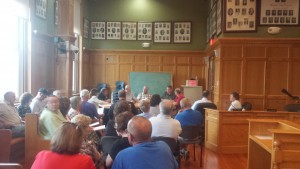 The traffic commission in front of the larger than normal crowd

Moulton also said that the Paper Mill School where the trucks drive by, no longer has a fence up, which means that children are potentially in danger.

“I see it almost once a week, they blow the stop sign,” Sean O’Neill of Joseph Avenue said. Joseph Avenue intersects with Paper Mill Road. “My house is shaking at 4:30 in the morning, the ground in my carport is cracked.”

Similar complaints and concerns came from residents at the meeting, indicating that houses are being shaken from large trucks driving by, that the noise of the vehicles is too loud to talk over and that it starts early and can go as late as 9 p.m. One resident even gave a recounting of a truck driving by at 11 p.m. one Saturday night.

The origin of the truck traffic, according to the commission and residents, is based on the sand and gravel pit at the end of Paper Mill Road.

The commission indicated that as of right now, there is nothing that can be done regarding ordinances or laws to prevent the trucks from traveling on the road, which was the original suggestion. If there was enough truck traffic, the commission could put forth a suggestion for an ordinance excluding large trucks from traveling on Paper Mill Road, but a study done from June 28 to July 5 showed that the traffic volume was not high enough to meet the state’s standard for an exclusion.

Several residents in attendance though, thought that the statistics from that study were misleading. They felt that due to it being over a holiday weekend, truck traffic would be lower and it would not give an accurate number of trucks that drove down Paper Mill Road.

The commission decided that it would run another study, with a start date to be determined.

Although there would be no truck exclusion, the commission did attempt to offer some relief for residents.

Westfield Police Chief and traffic commission chairman John Camerota said that the police department will look to increased law enforcement in the area. This should help with the complaints of stop signs being run and speeding, Camerota said. Additionally, commissioner Brian Boldini said that this enforcement could possibly lower the amount of traffic, since it would dissuade drivers to use the road.

“We’ll do our best to try to help you with this problem,” Camerota said. “We will research every avenue.”