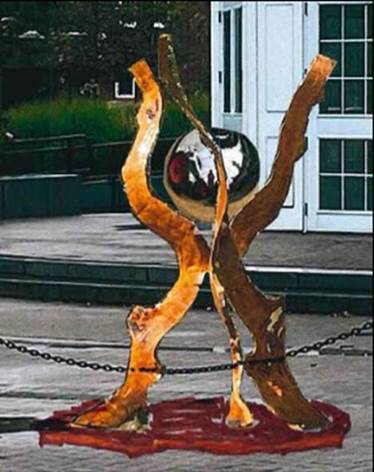 The tree art sculpture “Epiphany” by Harold Grinspoon, shown here in a rendering, was selected by the Parks & Rec committee for an installation in WESTFIELD. (HAROLD GRINSPOON PHOTO)

For the past 20 years, Grinspoon, a 92-year old Agawam sculptor and philanthropist, has been taking dying trees and giving them new life in sculptures.

Planning Board vice-chair Cheryl Crowe had brought the idea of an installation in Westfield to the Parks & Recreation committee on behalf of the board, as a way to give back to the city. She said Grinspoon likes to put the sculptures in cities and towns with high visibility for free, and they’ll come in and install it themselves> Grinspoon has said he  likes people to have beauty in their town and it gets his name out.

Prior to the meeting, Parks & Recreation Chair Michael Tirrell and two other members had visited the two parks identified as possible locations for the sculpture, the Kane/Wojtkiewicz Park and the Sgt. John Hussey Memorial Park at the intersection of Holyoke Road and North Elm Street near the turnpike.

Tirrell said they all agreed that the Kane/Wojtkiewicz Park was the best place to put the tree art. He said Sgt. Hussey Park was a good spot, but people drive by it quickly and there were questions about blocking the visibility of cars, as well as some needed tree work in the park that could potentially cause damage to the sculpture from falling limbs.

Tirrell said the Kane/Wojtkiewicz Park is near the two green bridges, and between the Clock Tower and the Westfield rRver. The area is raised, with irrigation at the edges of the property, and has nice visibility from cars going north and south.

The committee also reviewed three different tree art sculptures for placement, narrowed down by Crowe from among those available. Grinspoon art curator Madline Calabrese recommended “Epiphany,” made from a single log cut in three pieces, that has a large reflective ball which adds interest to it.

“You can see yourself in it, and take photos of yourself and friends,” Calabrese said, adding that she thinks that will be a fun element for the city. She said the sculpture, which is 12 to 15 feet tall, is mounted on a triangle steel base covered with bark mulch, and was the favorite of the sub-committee that had done the site visits.

In response to questions at the meeting, Calabrese said this will be the first installation for “Epiphany,” which has previously only been seen at the Agawam Corporate Center where Grinspoon houses his work. She said there will be two plaques installed listing Harold Grinspoon as the artist and a second plaque acknowledging contributing artists, including Calabrese, both mounted on a single pole. “They’re all ready to go,” Calabrese said.

Also ready to go is a loan agreement which Calabrese said she would forward to City Hall. The initial loan period is 24 months, with automatic renewal for one year for a total of three years renewal. The city can opt for a two to five year placement for the sculpture.

Installation fees and cost will be paid by Harold Grinspoon Artworks. Calabrese said since there is no ground preparation needed, they will come in with a crane and signage and set it up. After it’s installed, they will contact city officials in two years, to see whether they would like to renew.

The next step is for the loan agreement to be approved by the City Council and the Law Department. Calabrese said the agreement was written with municipalities in mind, with the first placement in West Springfield. She said she would be happy to answer any questions from the Law Department.