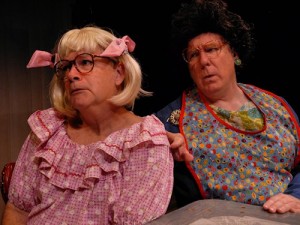 J.T. Waite, left, as Charlene Bumiller, and James Hartman as Bertha Bumiller star in “Greater Tuna” at the Majestic Theater in West Springfield through December 18. (Photo by Rick Teller)

WEST SPRINGFIELD – In 1981, playwrights Jaston Williams, Joe Sears and Ed Howard spawned “Greater Tuna,” the first of four comedic plays (followed by “A Tuna Christmas,” “Red, White and Tuna” and “Tuna Does Vegas”) all set in the fictional town of Tuna, Texas, the “third-smallest” town in the state.
Billed by the Majestic Theater as “outrageously funny and inventive,” the play introduces the audience to 20 of Tuna’s 25 inhabitants through an interesting yet often offensive look at the lives of these close-minded rednecks.
According to producing director Danny Eaton, “Greater Tuna” is the most-produced play in the United States, but one is left wondering why it holds this distinction. Perhaps it is its low-budget requirements that attract producers nationwide.
The Majestic’s Greg Trochlil has set the play to a neutral backdrop on which homes appear as faint sketches. The set is equally spare, consisting of two retro dining tables with chairs and a vintage standing-console radio. There are no props – all is left to the imagination, including the stray dogs adopted into the Bumiller household. Definitely low-budget.
In addition, all 20 of the town’s citizens – both male and female, young and old, and of widely divergent personalities – are played by two actors, in this case veteran Majestic performers James Hartman and J.T. Waite. This presents multiple challenges – for the actors, for director Sam Rush and for wardrobe mistress Chris Thompson and costume designer Deb Trimble. Hartman and Waite manage to slip effortlessly in and out of character, adapting seamlessly to costume changes, voice changes and facial and
personality quirks. Hartman is equally convincing as disc jockey Thurston Wheelis and “Smut-Snatcher” Bertha Bumiller, who wants “questionable” books such as “Roots” and “Huckleberry Finn” removed from the school library. He also fills eight additional roles and provides the “bark-over” for Yippy, the (invisible) pet of the month that no one
wants to adopt because he yips a lot.
Waite is Didi Slavely, owner of Didi’s Used Weapons (“If we can’t kill it, it’s immortal”), as well as each of three Bumiller siblings, a weatherman, a reporter, a waitress, a politician and three additional characters.
Kudos to Trimble for designing costumes that are at once suitable to each individual character’s personality, yet cleverly assembled to facilitate fast-paced changes, and Thompson, whose backstage crew of wardrobe assistants made these quick dress changes flow seamlessly.
All of this having been said, one must however deal with the play itself, which fell short of being “outrageously funny” in many cases, and was overtly offensive in many cases, for example, with the Tuna community theater encouraging “negroes” and “Mexican-Americans” to audition for the chorus of “My Fair Lady,” and Aunt Pearl delighting in poisoning dogs. In many instances, the humor fell short of its mark. While there was always a smattering of laughter, there were also a few exasperated sighs and a fair number of shaken heads.
An exchange between Bertha Bulimmer and a reporter sums it up perfectly:
Bertha: What magazine did you say you wrote for?
Reporter: Intellect
Bertha: I don’t believe we have that in Tuna.
Not only would you not want to live there, it’s not the greatest place to visit either.
“Greater Tuna” runs through December 18 at the Majestic Theater, 131 Elm St. in West Springfield. Tickets are available by calling 747-7797.