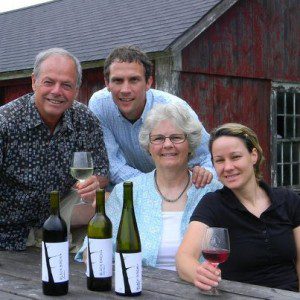 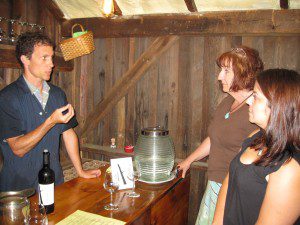 Black Birch Vineyard co-owner and winemaker Ian Modesto explains what an iced wine is to Martha Donovan and Dorothy Martin, of Longmeadow, during a weekend wine tasting at the Southampton vineyard. (Photo by Hope E. Tremblay) 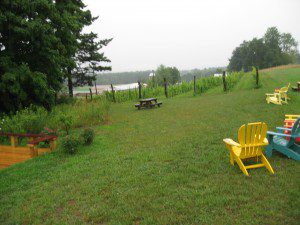 SOUTHAMPTON – Black Birch Vineyard is a locally owned winery on a quiet street nestled among pastureland in Southampton.
With views of farms and mountains, it is a bit off the beaten path – though not hard to find.
The vineyard opened for tastings this past April after several years of thoughtful planning and hard work on the part of its owners.
Ian Modesto and his wife Michele Kersberger had dreamed of their own vineyard for years. The couple has traveled the world, seeking out wines wherever they went, and spent much time in the Napa Valley. Modesto, a dentist, and Kersberger, an office manager, didn’t think making wine was possible, until they met like-minded couple Ed and Mary Hamel.
The Hamels, semi-retired, owned land in Southampton, including barns and pastures, which they thought could make a great vineyard someday. The couples combined their efforts to form Black Birch Vineyard.
“This was something we always wanted to do and we found a couple crazy enough to join us,” said Modesto, the company’s winemaker.
They started planting grapes and learning about grapes. They ate, slept – and drank – grapes.
“We planted our first grapes three years ago and have three phases of vines,” Modesto said.
Because of the time it takes to grow, the vineyard will not offer wines with its own grown grapes until next spring. Most grapes used in their current selection of wines are from the Finger Lakes, southeastern Massachusetts, and the orchard at the University of Massachusetts, Amherst. The wine-loving entrepreneurs spent many hours harvesting grapes from their sources, choosing the perfect ones for their wine.
Currently, they offer four whites and three reds.
In the coming weeks, Black Birch Vineyard will also have an iced wine.
Modesto said iced wine, also called dessert wine because of its sweetness, is a more expensive wine because of the process used to make it. After the grapes are harvested, they are frozen and from those grapes, little wine is actually produced.
“It took 800 pounds of grapes to make 11 gallons,” Modesto said.
Because it is such a labor, Modesto said iced wine is his favorite.
Kersberger said Vidal Blanc is her favorite.
“It really captures the true essence of the grape,” she said.
The couple agreed that most people they meet at their wine tastings, held every weekend, are red wine drinkers. However, the vineyard’s Epic White was recently awarded a double gold rating at a wine competition.
Modesto said he loves being a dentist, but sees his future as a winemaker growing to the point that it becomes his main career, while dentistry becomes something he does a few days a week.
“We want to remain a small, farm winery but we are increasing our product and want to become a destination,” said Modesto.
Black Birch Vineyard’s tasting room is inside a small barn. The interior has been updated, but maintains its rustic charm. A large bar was made from a piece of wood found on the premises and has its own story to tell, with initials carved into the wood. In the barn’s basement is where the magic happens. Modesto spends hours making wine there, but said it’s not fit for visitors just yet.
“We will be renovating it so people can tour it and see how wine is made,” he said.
Visitors are encouraged to spend the day. The wine tasting – which is $5 to try five wines – takes place inside the barn, but the grounds are the perfect place to enjoy a glass of wine, talk with friends, and enjoy the view. Welcoming Adirondack chairs, with umbrellas for shade, are inviting. Visitors can tour the vineyard and purchase wine, which sell for an average of $15 a bottle. Several bachelorette parties have already made stops at the vineyard and Kersberger said it’s a fun, relaxing way to spend an afternoon.
“We want to be a destination for people,” she said.
“We want this to be a place where people come to hang out, have a picnic and enjoy a glass of wine,” Modesto added.
The owners are looking into adding cheeses to their offerings next year. Black Birch Vineyard samples and sells their wines at the Northampton Farmers’ Market Tuesday afternoons behind Thorne’s Market from 1:30-6:30 p.m. Black Birch Vineyard, located at 155 Glendale Road, Southampton, is open for wine tasting Fridays from 1-5 p.m. and Saturdays and Sundays from 12-5 p.m.