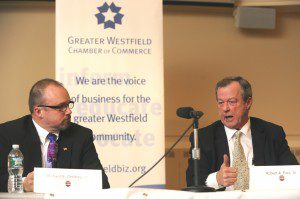 Richard E. Onofrey Jr., the incumbent Ward 5 City Councilor, listens as challenger Robert A. Paul Sr., makes a point last night at a candidates forum staged by The Westfield News Group and the Greater Westfield Chamber of Commerce in the Lang Auditorium of the Westfield Athenaeum. (Photo by Carl E. Hartdegen)

WESTFIELD – Incumbent Richard E. Onofrey Jr. and Robert Paul A. Paul Sr., debated last night before about 50 residents at the Ward 5 public forum sponsored by the Greater Westfield Chamber of Commerce and the Westfield News Group in Lang Auditorium of the Westfield Athenaeum.
Paul, who represented Ward 2 on the Municipal Light Board for the past six years, is challenging eight-year council veteran Onofrey, after being moved into Ward 5 during the redistricting process.
Paul, during his opening remarks, quipped that he has never served on the city council “but I see that as a strength.”
Both Onofrey and Paul identified similar Ward 5 issues: needed infrastructure investment and property taxes.
Onofrey said that he continues to work to expand sewer service to neighborhoods where they are the most needed because of septic system problems due to high water tables, but that financing that work is challenging.
“The city used to get state reimbursement for sewer expansion, now we have to pay with city money,” Onofrey said.
Paul said that other utility projects are initiated and completed within a short time, but that sewer projects linger, even though many neighborhoods have dry systems installed during subdivision development.
“We still have sewers that are not connected.  We have to work to get that done,” Paul said.
Both candidates were asked to define how the city should deal with unfunded state and federal mandates.
Paul said that the city needs to take a business approach to dealing with those unanticipated spending requirements.
“Every business has unplanned expenses,” he said.  “Every business has those surprises and you have to re-engineer how to spend to put together a budget to cover those expenses.”
Onofrey said that the city is required to fund state and federal mandates, but that the challenge is to find those funds within the budget.
“We have to fund it, so we have to see where we can cut to meet those mandates,” he said. “Some projects have to be delayed because we don’t want to raise taxes and put the budget (of those mandates) on the backs of residents and businesses of Westfield.”
The candidates took different approaches to the issue of the city budget.
Onofrey, as chairman of the City Council’s Finance Committee, said that while he is protective of the stabilization fund, using that account to buffer residents from tax increase is one reason why it was established.
“The budget drives tax rates, it drives everything we do in the city,” Onofrey said. “I have supported using stabilization funds to reduce tax increases. I’m very protective of the stabilization account because I believe that it should be used to benefit the taxpayers of the city.”
Paul said that taxes “are too high for residents, many of whom are retired, and we have to get a better balance between residential and commercial rates.”
“(The City Council) needs to understand how to support taxpayers,” Paul said. “We have the lowest energy rates in the region for the benefit of ratepayers.  We need to do that for taxpayers as well.”
Both candidates were asked to identify a proposal to spur economic development.
Onofrey said that the city needs to establish a streamlined permitting process, similar to what the Finance Committee has instituted for review tax incentive financing (TIF) agreements with business seeking to build or expand in the city.
“We tightened up on who we give a TIF to and how that works,” Onofrey said, adding that most TIFs now have a five year limit and a maximum tax reduction of 50 percent.
“That’s the same rate as what homeowners pay, so businesses are not paying less than residents,” Onofrey said.
Paul said many of the impediments to economic progress are due to the lack of teamwork among municipal departments. Paul used the city’s utility systems as an example of redundancy of function which results in a higher cost.
“We have the technology for one metering system, one billing system, one distribution management team, but the city can’t figure out how to have one team,” he said.  “We continue to have five or six teams.”