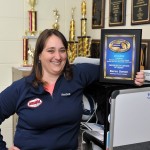 WESTFIELD – The athletic director for Westfield High School and Westfield Vocational-Technical High School, Karen Gomez, has recently been awarded the President’s Award of Merit by the Massachusetts Secondary Schools Athletic Directors Association (MSSADA). It is awarded once a year to the person who has given a lot of their time to local high school sports, including the length of time they give and to any sort of special accomplishments on both a local and state level.
“We nominated Karen for the award for District F, which is where we are. They then reviewed all the nominees and selected her for the award” said Tom Russo, the Pioneer Valley Interscholastic Athletic Conference (PVIAC) executive secretary.
“I feel honored to be recognized by my peers.” said Karen Gomez. “A lot of people feel that all I do is just go to athletic events, but you need to understand all the work that goes on behind the scenes. It feels good to have my work recognized”.
Originally starting out as a physical education teacher for Westfield High School, Gomez currently serves as the athletic director for the Massachusetts Interscholastic Athletic Association (MIAA) wrestling committee for District F, which covers most of Hampden County. She has worked on scheduling several meets in Westfield, such as wrestling tournaments for the MIAA, gymnastics tournaments, and baseball tournaments.
Gomez isn’t resting on her laurels, however, and she’s optimistic about the spring season for the Westfield schools.
“The athletic programs are very successful in Westfield. The schedules and practices are very rigorous for the students and they work hard. The coaches are the ones who have to bring the students to the next level at the end of the day” said Gomez.