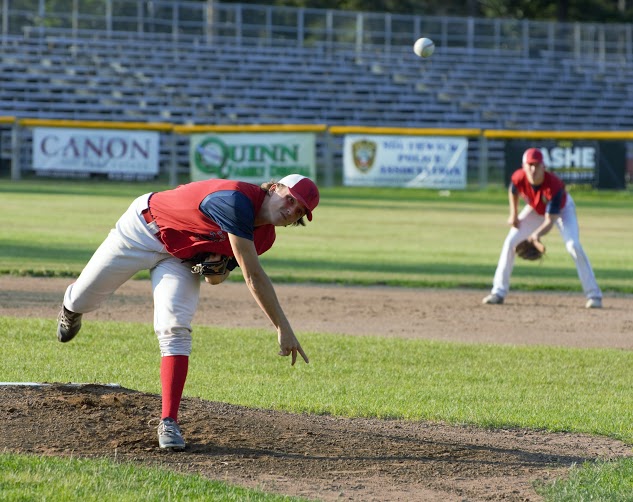 WESTFIELD – Heading into the bottom of the seventh inning, Westfield and Greenfield were tied up at three runs apiece. Colin Blake stepped up to the plate for Westfield and reached first base on an error from the infield. Stefan Krol then bunted to push Blake to second.

The situation was all set up in now in the hands of catcher Jon Huntley. Huntley connected on a pitch and the ball went sizzling right down the left field line to score Krol. 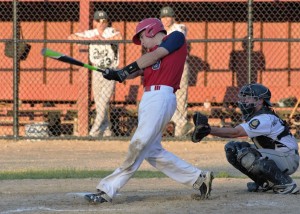 Jon Huntley had a multiple-hit game for Westfield. (Photo by Lynn F. Boscher)

Just like that, Huntley’s hit was the game-winner as Westfield defeated Greenfield 4-3 in American Legion play at Bullens Field on Wednesday night.

Huntley felt relieved to have the walk-off hit for his team.

“I haven’t been hitting all that well these recent games,” said Huntley. “It was a good time to get out of my slump here.”

Krol pitched a solid game for Westfield as he went six strong innings. John Daley came into the top of the seventh to keep the game tied up.

Westfield held a 3-0 lead earlier in the game and then Greenfield was able to tie the game up off a couple errors from Westfield. Allowing Greenfield back into the game didn’t stop the Westfield players from playing their game.

“You give them a lot of credit, they keep coming back,” said Westfield head coach Don Irzyk. “They’re really resilient.”