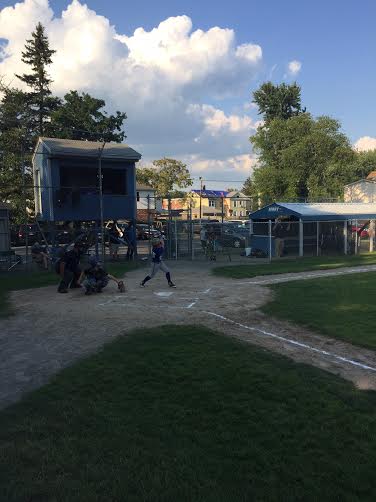 WESTFIELD – The 11-year-old Westfield American team didn’t waste much time in their semi-final matchup with Longmeadow on Wednesday night. In under an hour, Westfield American defeated Longmeadow 11-0 in four innings at Ralph E. Sanville Field to advance to the Little League District 2 Championship on Saturday.

In the bottom of the fourth inning, Liam Poole hit his second two-run home run of the game to give Westfield American the 11-0 win and cut the game short. Poole’s first homer came in the bottom of third inning to put the lead at 6-0. 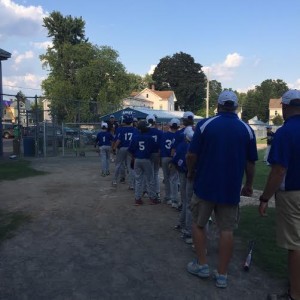 Westfield American shakes hands with Longmeadow after an 11-0 victory. (Photo by Greg Fitzpatrick)

Poole wasn’t the only player to hit one over the fence as Jay Scherpa drilled a two-run shot to put Westfield American on the board in the bottom of the first inning. In that same inning just five batters later, Sean Roselli tripled to drive in a pair of runs and extend the score at 4-0.

Scott Hepburn also contributed with two hits and an RBI for Westfield American while Josh Wagner had a double and drove in a run as well.

As impressive as Westfield American was by stringing together 10 hits in the contest, their pitching was just as notable.

Jay Scherpa took the mound for Westfield American and was in complete control from start to finish. Going all four innings, Sherpa allowed no runs, on just one hit while striking out five.

“Jay threw a heck of a game,” said Westfield American Manager Tom Flaherty. “I think they got one hit up the middle and that was about it.”

Sherpa was able to keep his pitch count to below 50 as he will now be available for Saturday’s title game against Westfield National. His ability to put up quick work on Longmeadow proved to pay off.

The playoff game for Westfield American wasn’t a typical regular season tilt as it was important to get the victory.

“We went 4-0, that doesn’t mean anything anymore,” said Flaherty. “It’s all about winning now.”