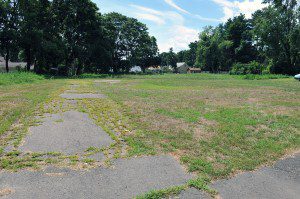 This former Noble Hospital property on Brookline Avenue in Westfield has been sold to a land developer. Neighbors against the project expressed their concerns to the Planning Board during last night’s meeting at City Hall. (File photo by chief photographer Frederick Gore)

WESTFIELD – The Planning Board last night narrowly rejected a special permit petition to allow the creation of residential lots on Brookline Avenue.
The majority of the seven members voted to grant a special permit under the city’s infill ordinance approved by the City Council last fall, but failed to gain the super majority of five votes required for a special permit. The vote denying the special permit was 4-3.
The ordinance allows residential development on lots that were once legal building lots, but became non-conforming as the city changed zoning requirements. Residents often purchase two adjoining lots with the idea of holding one lot as an investment for future sale or for construction of a second house for a family member, but were stymied by changes to the zoning codes that generally increase the lot area requirement.
Consultant Robert Levesque of R. Levesque Associates presented details of the petition, submitted by Gerry Farrelly, seeking to create three building lot.
The Farrelly proposal is similar to the proposal submitted last year by Noble Hospital, through its real estate division, Silvermill Realty Corp., to the Zoning Board of Appeals for a dimensional special permit allowing the hospital to subdivide the property into three lots, a proposal that was withdrawn because of vehement opposition from neighborhood residents.
The hospital originally purchased the property, which had been the site of a commercial greenhouse, in 1992 from the Michael J. Bemben Trust with the plan to create additional employee parking. The hospital hired an environmental firm to perform hazardous material mitigation to remove chemicals used in association with the greenhouse business. The greenhouse and accessory structures were later demolished to clear the lot that now contains only a single-family structure. The property was sold to Farrelly, owner of Farrelly Construction LLC, on Feb. 22, 2012 for $128,500. Farrelly is a nearby resident, residing at 60 Mill St., a lot located at the corner of Brookline Avenue.
The public hearing on the petition was originally slated for the Planning Board’s Aug. 7, 2012, session but rescheduled to last night at the request of the petitioner due to a family emergency.
The ordinance allows residential development on lots that were once legal building lots, but became non-conforming as the city changed zoning requirements.
The City Council approved Article IV, Section 4-20 (the infill ordinance) of the city Code of Ordinances on Nov. 3, 2011 that gives the Planning Board authority to grant special petitions to create infill lots, if the petition meets the standards set by the City Council.
That ordinance states that petitions have to meet the following standards:
Section 4-20.2 – Infill and Lot Size Averaging – The Planning Board may issue a Special Permit to allow for a reduction in the Dimensional Requirements and/or an increase in the Density (number of dwelling units per lot) Requirements for lots for residential purposes within the RR, RA, RB and RC Districts provided they find all of the following:
(a) said lots are not located within a Water Resource Protection Area
(b) the lot’s dimensions and density are equal to or greater than the average (the sum of the values divided by the number of values) dimensions and densities of at least sixty (60) percent of the lots located within that same Zoning District within a 300 foot radius of the lot’s property lines, but in no case shall such lot have less than 50 feet of frontage and/or 5,000 square feet of lot size.
A list of all of the lot sizes, densities and frontages corresponding to the properties required above derived from the city’s Assessor’s Maps, as well as the mathematical equations determining the averages of at least 60%, shall be filed by the Petitioner as part of the Special Permit Application.
(c) the lot is serviced by both Westfield public water and public sanitary sewer
(d) on-site parking is provided in accordance with the zoning parking requirements
(e) no traffic congestion, health or safety limitations would be created
(f) the proposed dwelling is consistent with the architectural style, scale, setbacks and character of the immediate neighborhood (abutters and abutters-to-abutters) in that Zoning District.
The ordinance allows the petitioner to “cherry pick” 60 percent of existing lots within 300 feet to the property to be subdivided, rejecting larger lots to meet the infill requirements. Levesque presented details indicating that 56 houses fall within the 300-foot zone and that 34 of those were selected to meet the frontage requirements for the tree proposed lots.
The lot with the existing structure would have had a frontage of 63 feet, while the two lots to be built upon would each have had a frontage of 69 feet, a proposal that was uniformly criticized by residents speaking at the public hearing.
Neighborhood residents again voiced their concerns that the creation of three building lots and the infill process that allows the petitioner to selectively “manipulate” the data by that cherry picking process, suggesting that only two lots would not have a “detrimental” impact on the existing neighborhood.
Nobody spoke in support of the infill special permit petition, but residents from Brookline Avenue, Loomis Avenue and Hassler Street rose to voice their opposition.
Carla Warner of 20 Brookline Avenue urged that the petitioner change his development proposal.
“Add one house which will enhance and maintain the integrity of the neighborhood,” Warner said. “It’s a great neighborhood, one of the quietest neighborhoods in the city. I love living downtown.”
“I’m afraid this will change the character of our neighborhood, change the make up of what we see as our neighborhood community,” she said. “Let us live a lifestyle that we feel is important to Westfield.”
Donna Pittello of Loomis Avenue said the integrity of the existing neighborhood is “amazing” and asked the Planning Board members to preserve that character.
“Please take a second look that this special permit,” Pittello said. “Residents feel safe because it’s a family neighborhood.”