WESTFIELD—As the warm weather continues in the city and fireworks and other festivities are expected to start soon, you may also start to see a unique police vehicle out and about—the Zero Motorcycle. 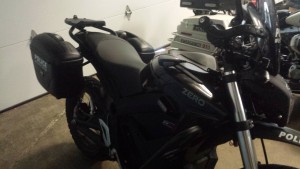 The vehicle is an electric motorcycle, and makes little to no sound and has no emissions. It made its debut a little over a year ago, and has been seen throughout the city. According to Westfield Police Lt. Eric Hall, while police don’t use it for patrol the vehicle gives them an advantage when attempting to get to places where other vehicles don’t typically go.

“It’s not a patrol vehicle, so you won’t see us riding around on it making motor vehicle stops,” Hall said. “We use it as a special use vehicle, it allows us to get to places we can’t normally get to.”

We can get it on the bike trail, on the dike, through the woods. You can drive it through the fields, onto a trail system.”

Hall said that this especially helps when police are looking for someone missing, such as if a person with memory or cognitive problems goes missing, or if someone possibly runs away. This is due to it being able to cover areas where people may traverse on foot.

“We used it and found someone a couple weeks ago, found an elderly person who wandered away,” he said.

In addition, Hall said that the vehicle can travel 90 mph, which can make covering a large distance much easier than if an officer was on foot or on a bicycle.

And although it is stealthy according to Hall, the vehicle is still equipped with lights and sirens. The motorcycle, which can be charged through a conventional three-prong plug outlet, can go up to 112 miles on a single charge, according to a previous article in The Westfield News.