After taking a 4-1 lead with two runs in third, Westfield (11-4) was held hitless over the final four innings, finishing the game with 11 straight outs. Greenfield, meanwhile, scored once in the fourth and twice in both the fifth and sixth innings for the win.

The game started on the opposite side from where it ended for Post 124. After starter Ari Schwartz retired Greenfield in order in the first, Matt Hastings and Anthony Riga hit the first two pitches in the bottom of the inning for back-to-back singles. John Huntley walked to load the bases and Hastings scored on a fielder’s choice ground ball from Stefan Krol. Jack Blake’s sacrifice fly scored Riga and Westfield had a 2-0 lead. 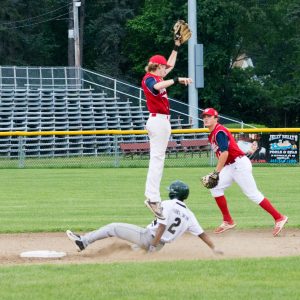 Greenfield scored a run in the third before Westfield scored twice more in the bottom of the inning. With two outs, Blake lined a single to center and Steve McKenna was hit by a pitch. Jacob Colapietro lined his second single to left, scoring Blake. McKenna scored when Adam Kearing’s ground ball to first was mishandled. Colin Burns drew a walk to load the bases, but the inning ended when Hastings grounded to third.

Westfield left four runners stranded at third base and finished with only five hits.

Post 124 will host Longmeadow on Monday night at 7 p.m. at Bullens Field.

WHITNEY PARK, LUDLOW – Ludlow starter Andrew Roman was perfect through four innings Saturday against Westfield Post 124. He had seven strikeouts and had allowed only one ball out of the infield through the first 12 batters. So when Westfield broke through with single runs in the fifth and sixth for a 2-0 lead, Post 124 was in a good position to get away with a win against one of the best pitchers in western Massachusetts.

Combine the two runs with Post 124 starter Cam Niemiec’s afternoon dominance and it was looking like a good start to Westfield’s doubleheader Saturday. Niemiec had faced only one batter over the limit through five innings, his lone blemish a Roman single in the fourth. But in the sixth, Ludlow used two infield singles, a throwing error and a fielder’s choice to tie the game 2-2.

Ludlow won the game in the bottom of the seventh with a leadoff triple and a sacrifice fly to deep center.

Westfield got its first hit in the fifth, a Jack Blake single to center. After stealing second, Blake scored on Steve McKenna’s long double to right-center. Westfield loaded the bases with one out but couldn’t score.

In the sixth, Jacob Colapietro was hit by a pitch, stole second, moved to third on a ground ball out and scored on Blake’s single through the right side of the drawn-in infield. Westfield was able to load the bases with one out, but Roman struck out the next two batters to get out of the inning and set up Ludlow’s comeback win in the seventh.