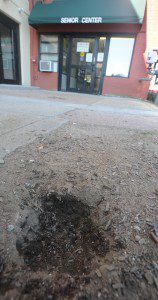 A small hole is all that is left after a thief stole, apparently for the scrap metal value, a post and the switch mounted on it, that remotely controlled the door for the Council on Aging Senior Center on Main Street. (Photo by Carl E. Hartdegen)

WESTFIELD – The users of the city’s senior center on Main Street, as well as the staff there are “very upset” after the weekend theft of a post outside the front door which housed a switch to remotely open the door to the senior center.
Tina Gorman, the executive director of the Council on Aging, said yesterday that the switch disappeared a week earlier and said “It’s having a huge impact.”
“Anybody with a walker, a cane, a wheelchair, or severe arthritis … has to wait and hope that one of us sees them to open the door,” she said.
Gorman explained that when she arrived for work a week ago she noticed the post and the switch mounted on it was gone but said she initially thought it had been removed temporarily in connection with work underway nearby.
The switch was radio activated and thus had no wires connecting it to the door. The post was not cemented to the ground and was only buried in the soil several inches deep.
However, Gorman said, she checked with the construction supervisor for the renovation project at the Rocky’s hardware store next door, the maintenance staff at the nearby General Shepard apartment building and the Gas and Electric Light department but could find nobody who knew what had happened to the switch.
The loss has been a hardship for many of the senior citizens who use the center and a nuisance for the greeters who have had to get up – to open the door manually or by use of an interior switch – every time somebody with impediments comes to the door.
Although the problem is a manageable nuisance during the mornings when there is a greeter on duty, it is a greater problem in the afternoons when there is nobody posted at the door and staffers do not always have a clear view of the door.
She said that, due to the construction project, there had been a refuse receptacle parked near the door for weeks and said that she had seen somebody scavenging in it several times after regular work hours and on the weekend.
Gorman said that the construction supervisor said that his employees had told him that all the metal had been removed from the construction debris in the receptacle and he opined that the post and switch had been taken for the scrap value of the metal it contained.
She explained that, from the window of her second floor office, she had seen, on at least three occasions in the past months, a man taking metal from the receptacle, apparently for scrap.
Gorman said she thought little of the man she saw repeatedly removing scrap metal but said that she has not seen him lately.
But, she said that she thinks that the switch was stolen for the scrap value of the copper wiring inside.
“We assume that’s what happened” Gorman said and went on to say that construction workers subsequently found the plastic post on the verge of the parking area.
“The only thing that was left was the plastic,” Gorman said.
Gorman said that it is reprehensible that a thief could be so heartless to make such a hardship for the elderly citizens who comprise the Council on Aging clientele.
However, the switch will be replaced promptly by the management of the General Shepard apartments who donated the unit in the first place.
“It’s a new low,” Gorman said “But we’ll get it replaced”
“And we’ll cement it in this time,” she added.