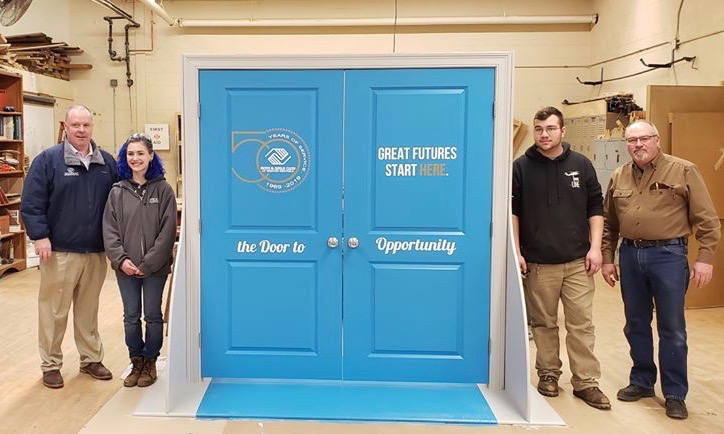 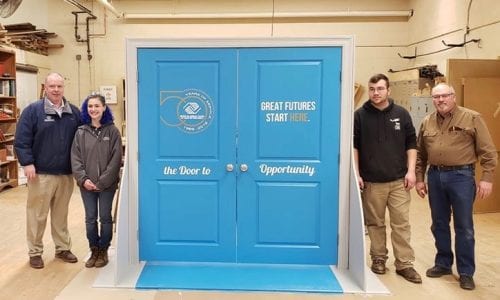 The students created the blue ceremonial doors that patrons entered on their way into the celebration at Chez Josef in Agawam.
Boys & Girls Club Chief Advancement Officer Bo Sullivan, who approached the school about the project, said the “blue doors to opportunity” are the symbol of the Boys & Girls Club.
“Everybody had to walk through the blue doors,” Sullivan said, adding that close to 500 people attended the celebration.
The doors were attached to a draped tunnel that was all lit up in blue, “The same color as the doors. It was a great first impression for the whole evening,” Sullivan said, calling it “a huge night.”
Construction Tech Instructor Brian Roy said two juniors and two seniors worked on the doors, which were donated by Re-Store in Westfield and constructed at the school.
Juniors Nate Whalen and Trenten Adam constructed the base and stand to hold the doors upright and trimmed out the doors for the fit.
Seniors Liza Safitova and Jacob Knight painted the doors with paint selected and donated by the Boys & Girls Club. The students also reinstalled the doors in the frame after painting them, and installed the handsets. The decals were ordered by the Boys and GIrls Club and applied in the shop.
“It was our collaboration with them to put the entire thing together,” Roy said.
Sullivan said the Boys & Girls Club appreciated all the hard work the staff and students gave them, including working over school vacation, to complete the doors. “They came out perfect,” he said.
Currently, the club and the school are deciding what to do with the doors now that the celebration is over. Sullivan said they may be returned to the school for future projects.