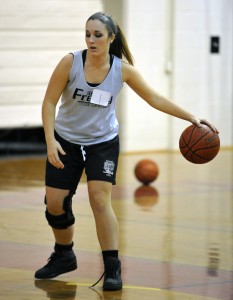 WESTFIELD – With only one player, Brittany Rhodes, having graduated, the Westfield High School girls’ basketball team is poised for improvement from a 5-13 mark of a year ago.
Seniors Melissa Welch and Evonne Tapasses, who suffered an ACL injury early last season, return, along with junior Sydney Ezold, and sophomores Rebekah Santiago and Keri Paton.
The Bombers also welcome seniors Carina Soto and Devon Fitzgibbons, juniors Sydney Cloutier and Amy Wardner, as well as sophomore Jules Sharon, and freshmen Kaleigh Kennedy and Alicia Arnold to the varsity unit.
All are expected to play a major role in helping the Lady Bombers achieve a .500 level or better, and a tournament berth.
“I plan on using everybody regularly,” Westfield coach Tim Sicard said. “That’s our plan. I’m hoping everybody will contribute.”
The schedule figures to play into Westfield’s favor. The Bombers are scheduled to play five of their first six games at home.
“We’re hoping that’s a plus,” Sicard said. “But we still play in Division I; we play all the tough teams. I hope for the best.”