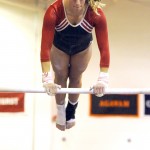 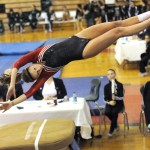 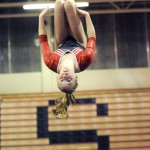 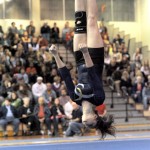 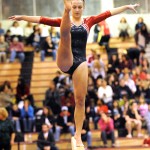 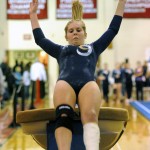 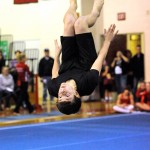 Westfield’s Josh Burrage tumbles in the air as part of his floor routine. (Photo by chief photographer Frederick Gore) 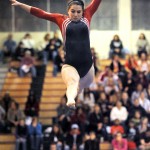 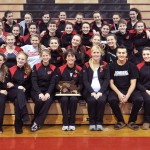 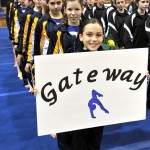 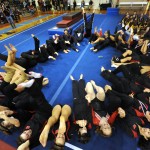 WESTFIELD – Opposing teams have been throwing darts at the red, white, and black clad Westfield High School gymnasts for the last four years only to come up with a near miss every time.
Westfield, burdened with a big bull’s-eye on its back, shook off the competition to win their fifth straight west sectional Thursday in front of a large home crowd of more than 500 in attendance. The Bombers extended their win streak – regular season and postseason – to 62-0.
Westfield, with a record 29 gymnasts, bested five schools from the Pioneer Valley Interscholastic Athletic Conference to finish first with 137.375 points.
“It’s as awesome as any other year,” Westfield coach Joanne Hewins said.
Minnechaug (134.975 points) and Hampshire (128.575) rounded out the top three, followed by Chicopee Comp (124.525), Gateway (124.4) and Agawam (115.2).
Westfield launched the night with a solid start on vault, and added to their scores with increased intensity, until building to a rousing crescendo with some amazing floor routines that the Whip City has become known for over the last decade.
“We had a good handle on this meet from the start,” Hewins said. “A lot of different gymnasts contributed.”
Westfield senior Ashley Bates, sophomore Taryn Hamel, and Becky Cyr propelled their team into the early lead with top three finishes on the vault. Hamel catapulted to a second place tie with an 8.35. Bates and Cyr tied for third overall (8.25).
Bates excelled on the beam, finishing first with an impressive 9.2. She was second on bars with an 8.5. Hamel, who finished fourth in the all-around competition, also had an impressive 9.15 on the floor routine.
Westfield freshman Sarah Hogan also impressed. Hogan was second on bars (8.6) and second on beam (8.95).
Westfield dominated the floor exercise with scores such as 9.475 from Nick Burrage, a 9.4 from Brendan Whitman, a 9.2 from Jaymie White, a 9.15 from Hamel, 9.05 from Josh Burrage, and 8.8 from Christy LaPlante.
While Minnechaug’s Emily Murphy won top all-around honors with a 36.450, Gateway freshman Sammy Dame won silver with a 33.525. The Gator gymnast recorded an 8.85 on floor, and an 8.7 on the balance beam.
“I felt good,” said Dame. “I improved a lot with new elements, higher scores.”
Dame is just one of nine gymnasts from a small Gateway team.  “We’re small but all of our girls here are pretty experienced.”
Gateway’s Aleesha Growchowski also had a nice outing, scoring an 8.85 on the floor.
Asked what Gateway will have to do to compete with Westfield, Dame said: “It might take a few more people.”
Seniors were also recognized as part of the award ceremony. Senior nights were cancelled all across Western Massachusetts due to the freak snowstorm that caused widespread damage throughout the northeast.
Hampshire senior Estee Abrahamson was recognized as the “Senior Gymnast of the Year.”
Abrahamson’s best performance came on the floor with an 8.7. She helped lead her team to its highest point total in her six-year career for the Red Raiders.
Hampshire’s highest total in the last six years was a 128.
“I was really excited because I’ve been doing gymnastics since I was age 7,” she said. “I left on a good note.”
Minnechaug was honored with the “Best Sportsmanship” award.