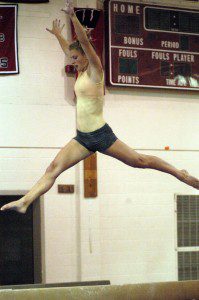 Westfield High junior gymnast Taryn Hamel enjoys a practice run on the balance beam. Hamel is considered the top All-Around athlete for the Bombers for 2012. (Photo by Chris Putz)

WESTFIELD – The Westfield High School gymnastics team has enjoyed an incredible stretch.
For the last five years, nobody has been better than Westfield. The Bombers have won 63 straight meets – regular season and postseason included – and their head coach was featured in Sports Illustrated’s “Faces in the Crowd” coaches’ edition. They are obviously THE team to beat again.
“If these guys hit, then they’re capable of keeping up their record,” Westfield coach Joanne Hewins said of her gymnasts. “They really have to be on their game.”
If Westfield is to extend its incredible win streak, talented All-Around gymnast, junior Taryn Hamel, will need to provide strong leadership throughout the season.
“She looks really good,” Hewins said of Hamel. “She’s got some new skills, she’s stronger.”
Hamel has expanded her repertoire to include “giants on bars,” and a “layout full” in the floor exercise (a flip with a full twist). She participated in the YMCA’s gymnastics program in the offseason.
Senior captain Jaymie White, juniors Brendan Whitman and Josh Burrage, both of whom dominate in the floor routine, and juniors Alyssa Carson, Maeve Reynolds, and Hannah Liquori are also expected to be solid contributors this season.
Lexi Delaquilla and Bridget Hartnett are the other two team captains.
Junior Angela Bonavita returns from a knee injury that kept her on the sidelines for the entire 2011 season.
“She’s coming back strong,” coach Hewins said of the solid junior gymnast.
Others to keep an eye on, the 19-year head coach said, are sophomore Sarah Hogan and Rachel Patenaude – both solid beam specialists.
“If we can stay on, we will be strong on beam,” Hewins said.
For the third straight year, Westfield will enjoy a record number of gymnasts on the squad (31). The increase is due to a number of factors, including the team’s continued success and the recent resurgence in the sport.
“Eighteen is ideal,” said Hewins, who still maintains a no-cut policy. “The Olympics certainly helped spark more interest.”
The biggest challenge for Westfield is expected to come from Minnechaug, who returns uber-talented senior Emily Murphy.
“They were strong last year,” Hewins said of the Falcons. “They will be as strong this season.”
Westfield will look to continue its run in a showdown with Minnechaug and Chicopee Comp in Chicopee next Tuesday at 6 p.m.