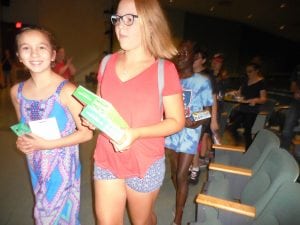 Students marched in with the donations they collected for the Westfield Regional Animal Shelter.

WESTFIELD – On the last day of the Westfield Middle School Outdoor EdVenture, students carried the donations of animal food, leashes, collars, toys, bedding, and kennels, and marched them into the auditorium of the school to present them to Lori Charette, animal control operations manager and Margeret Terkelsen, assistant manager of the Westfield Regional Animal Shelter.
The students started collecting for the shelter two weeks ago, for “Critters Big and Small,” this year’s community service project. They decorated boxes and cans that they then placed in participating businesses, including The Westfield Groomer, Polish National Credit Union, The Arbor’s, Rocky’s Hardware, The Westfield Athenaeum, Easthampton Savings and Cumberland Farms. 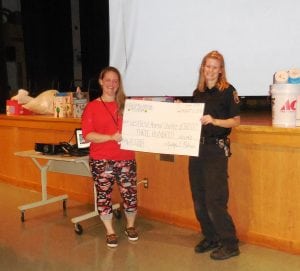 On Thursday, Kate Palmer, Outdoor EdVenture coordinator also presented the shelter with a check for $300 in donations that had been collected in the drive.
Terkelsen asked the students what they thought animal control did on a regular basis. “We pick up animals loose in town, and keep them until their owners come for them,” she said, adding if no one claims them, they help the animals to get adopted. She said the shelter also helps animals in Easthampton, Southampton and West Springfield.
“The money you raised and supplies help us a lot. We really appreciate it,” Terkelsen told the students. She also invited them to come and tour the Westfield Regional Animal Shelter, to see where their donations went.
After a few more questions and answers, all of the students gathered in front of the stage for a photo. They then headed outside for a water balloon toss and kickball, before celebrating the end of camp with a pizza party.
“This summer has been a big success for us,” said Christopher Rogers, administrator of student services who oversees the EdVenture camps for the Westfield Public Schools. “I’m very proud of the coordinators, staff and students, and the community service work the kids have done for the City of Westfield,” he said.