This was a familiar scene as the Owls, led by No. 4 Sarah Pliszka, sprint back to midfield after scoring a goal. (Photo by Mickey Curtis)

WESTFIELD – Junior forward Sarah Pliszka (Enfield, CT) had three goals and an assist to lead Westfield State University to a wild 5-3 field hockey victory over Fitchburg State University at rain-soaked Alumni Field last night.
Westfield is now 3-3 in the conference and 6-4 overall; Fitchburg is 2-4 and 5-5.
Pliszka put the Owls ahead, 2-0, at halftime. She scored 9:57 into the game off a corner on the first on two assists by sophomore Kelly Kenney (Suffield, CT).
Plizka scored with exactly two minutes remaining in the first half with an assist from freshman Taylor Chase (Holden/Wachusett Regional).
The Falcons came storming back to score three goals early in the second half to take a stunning 3-2 lead. The initial two goals were scored by senior speedster Jamie Kelley (Pepperell). Kelley’s game-tying goal came on a penalty stroke, with her shot passing the goalie on the stick side.
Junior forward Rebecca Bush then gave the Falcons their only lead of the game on a scramble goal in the 55th minute, with Kelley credited with the assist. 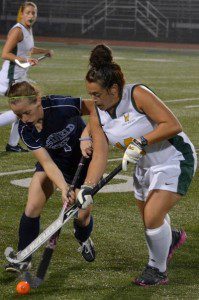 The Owls picked the pace up in the run-and-gun second half, however, scoring three goals in a four-minute span for the 5-3 advantage.
Kenney scored the game-tying goal 50 seconds after Bush’s tally, with an assist from Pliszka. One minute and seven seconds later, at the 56:41 mark, Chase scored the game-winning goal. Pliszka and Kenney teamed up again for the game’s final goal in the 60th minute.
Westfield outshot Fitchburg, 18-8, and both teams had seven corners.