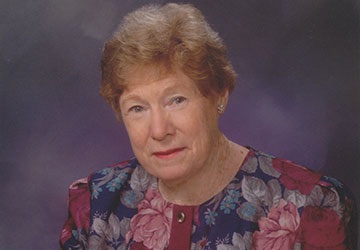 WESTFIELD – Catherine B. Shannon, a professor emerita of history at Westfield State University, will be honored with a gold medal citation at the Eire Society of Boston’s 78th annual Gold Medal Dinner. The ceremony will take place on April 25 at 6 p.m. in the St. James Room at the Fairmont Copley Plaza.
The Gold Medal Dinner celebrates the accomplishments of those who exemplify the best in Irish culture and ideals. This year’s recipient, Shannon, will be awarded with a gold medal citation which was written by a prominent local writer and inscribed in Irish calligraphy by a professional artist.
Past honorees include acclaimed actress Siobhan McKenna, former U.S. ambassador to Ireland Jean Kennedy Smith, Nobel Peace laureate John Hume, Nobel Literature laureate Seamus Heaney, former president of Ireland Mary Robinson, and former United States president John F. Kennedy.
Shannon taught courses in Irish, British, and European history for four decades and is an acclaimed scholar in Irish and Irish-American history. She is the author of several articles, chapters, and books including the books “Arthur J. Balfour and Ireland, 1874-1922” and “The Churchills in Ireland: Connections and Controversies.” Her articles and book chapters have often focused on the role of women in the Northern Ireland conflict and peace process, and she herself was actively involved in the 1980’s and 1990’s in the search for a peaceful solution to the conflict.
Shannon was the first woman president of the 278-year-old Charitable Irish Society of Boston, served as president of the Eire Society of Boston, and was a member of the Executive Committee of the American Conference of Irish Studies for over a decade. In 1999, she was one of 15 Irish-Americans from Massachusetts to receive the “Dreamer of Dreams” award from the New York based newspaper, the Irish Voice. She has received the Solas Award from the Irish International Immigration Center and the Irish Heritage Award from the Irish American Partnership.
The Gold Medal Dinner was established in 1937 along with the founding of the Eire Society. The Eire Society promotes the study of Irish history and culture. They also contribute to the arts and culture of Boston through donations, lectures, and receptions, among other activities.
This year’s annual Gold Medal Dinner at the Fairmont Copley Plaza will feature Dick Flavin as the master of ceremonies, an invocation by Reverend Gerald Osterman, a benediction by Reverend Brian Dixon, and a presentation of the national anthems of the U.S. and Ireland by singer Maureen Keady.