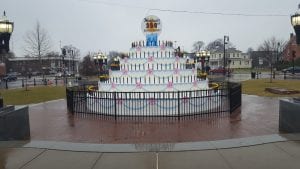 WESTFIELD- Over the last year, the City of Westfield celebrated its 350th birthday in a variety of creative ways.

Although the birthday itself was on May 19, the celebrations continued in some capacity throughout the rest of the year.

The Westfield 350 celebrations began towards the end of 2018 with the first lectures in the Westfield 350 Historical Lecture Series. The first lecture on Nov. 28, 2018 was a look back by Dr. Robert Brown at the other semi-centennial birthday celebrations the city has gone through, most notably the 200th, 250th, and 300th birthdays of the city in 1869, 1919, and 1969 respectively.

The festivities for the next year officially kicked off on New Year’s Eve with the city’s first ever “First Night” celebration behind the Boys and Girls Club. Keeping with a local flair, organizers opted to illuminate a large Westfield 350 sign made at Columbia Manufacturing rather than dropping a ball as is done at Times Square.

No birthday is complete of course without cake. Before the First Night celebration, the City installed and lit the candles of the large cake that sat on the Park Square Green until September. It was built in a collaboration of several local businesses, including Westek Architectural Woodworking, where the cake was assembled, and Elm Electric.

The cake and its 350 candles now sits by the Town Hall of Hatfield, a town that will begin its own 350th birthday celebrations with the new year.

The lectures that followed the first one in November touched upon many different aspects of the city’s history. Some presenters spoke of Westfield’s previously dominant whip industry, while others spoke of mysterious, unsolved murders in the city. Each lecture drew hundreds of people to listen.

The celebration of the city’s birthday peaked during the birthday weekend of May 17 – 19, during which the climactic Westfield 350 parade took place. The parade featured more than 2,500 people who marched from Stanley Park to the Park Square Green. 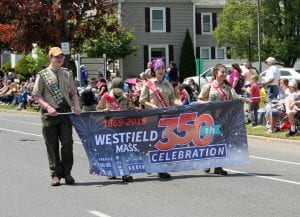 A group of scouts hold the Westfield 350 parade banner during the May 19, 2019 parade in honor of the city’s birthday. (Photo by Marc St. Onge)

“What I love about this celebration is that, when you looked at the parade, everyone was in it,” said Harry Rock, President of the Friends of the Westfield 350, “People would say to me ‘well who is going to watch it? everyone is in it!’.”

Also taking place that weekend was the original Westfield 350 musical, “Time in Westfield” by Kathy Palmer of the Westfield Theater Group. The play featured dozens of city residents and portrayed several key events and figures in the city’s history told via time travel.

The Westfield 350 celebrations dominated the local news for the last year, and it may still make headlines in 2020. After May 19 had passed, some more lectures from the historical lecture series were held.
Police Capt. Michael A. McCabe presented two lectures for the series on the murder of Professor Lewis B. Allyn in 1940. More lectures are rumored to be in the works for 2020.

“It is hard to believe that we all took this on two-and-a-half years ago and now it seems so far away, and it all went by so quickly,” said Rock, “I look back with fondness and almost sadness that it is over.”

Rock noted that much of the Westfield 350 events were documented and captured in a book that has been on sale, and is available in the office of The Westfield News at 62 School St.

“When you look at that, I tried to capture as many faces as I could of who made Westfield, Westfield in 2019,” said Rock, “I think that book will be the research for historians in the future who want to know what the people of Westfield were like in 2019.”

Rock took the time to thank everyone who made Westfield’s 2019 as special as it was.

“I look back on 2019 as a year filled with fun education, memories civic pride and an opportunity to say thank you to community from me personally and my wife, Anne.” said Rock.