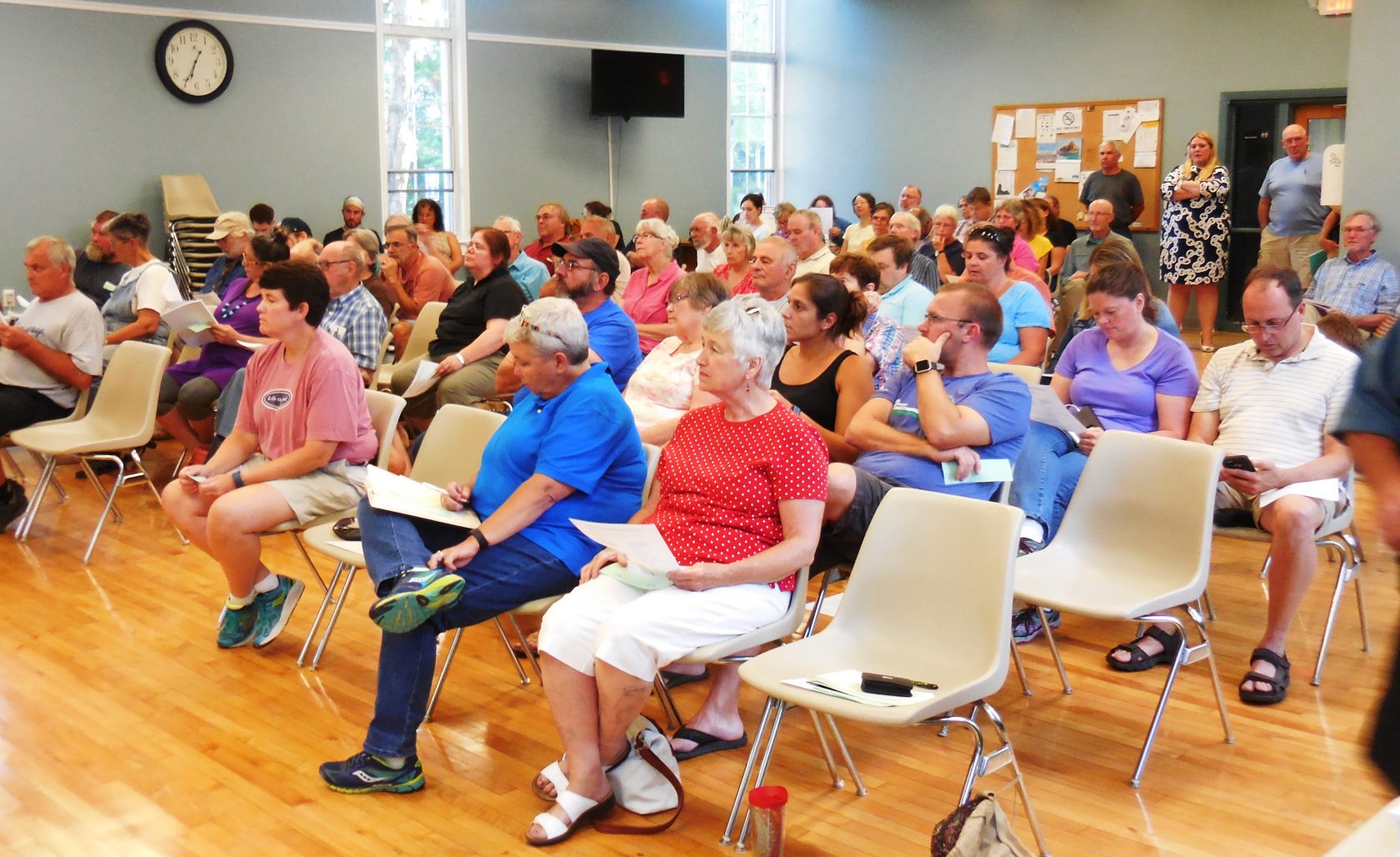 HUNTINGTON – This past year, the Gateway Regional School District had another difficult time getting the FY18 budget passed through four of the six member towns. However, this time the School Committee heard the concerns of the member towns, and has scheduled five joint budget meetings with the towns for the FY19 discussion. School Committee members, administration and town officials have also begun participating in joint long-term planning meetings facilitated by members of the Massachusetts Association of Retired Superintendents (MARS). 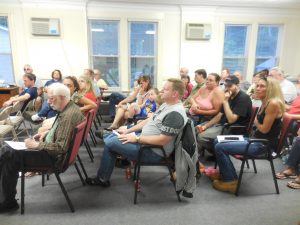 Russell residents came out for several meetings on Gateway budget in 2017. (Photo by Amy Porter)

RUSSELL’S ANNUAL TOWN MEETING SENDS MESSAGE TO GATEWAY
MAY 8 – 63 residents attended the Annual Town Meeting in the Russell Elementary School which brought an extended discussion regarding Russell’s share of the above minimum contribution to the Gateway Regional School district.
Russell was one of three Gateway towns, including Huntington and Chester that had an increase this year in the assessment to the town. Blandford, Middlefield and Montgomery all had decreased assessments, and passed the budget on the first vote. One more town was needed.
In Version 1 of the budget, Russell’s above minimum contribution was $733,797, an increase of nearly $200,000. At the town meeting, the amount recommended by the Finance Committee was $550,000. The total assessment to Russell in the district budget was $2,243,798.
When the article was presented, Lyndsey Papillon, a member of the Gateway School Committee, made a motion on the floor to amend the amount to $733,797, Gateway’s original request.
During the discussion that ensued, Finance Committee member Derrick Mason said that education represented 65% of the budget of the town, and this was the only portion that was optional. Mason said the $550,000 amounted to a rejection of the School Committee’s budget.
Mason also said that the increase, in combination with a loss of $150,000 in the reduced lease with Westfield for Russell Elementary School, led to a total increase of $350,000 to the town. He said this would result in the average tax bill going up several hundred dollars.
The motion to amend the amount to $733,797 failed in a voice count. The motion to pass Article 9 as originally read with $550,000 was then voted. “The ayes have it,” Moderator Ilityd Fernandez-Sierra said, and the budget was defeated. 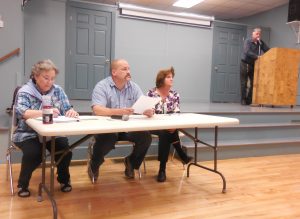 HUNTINGTON FOLLOWS SUIT
JUNE 5 – At Huntington’s Annual Town Meeting, most of the line items in the town budget were approved unanimously with little discussion, except for the over minimum contribution to Gateway of $733,797. Finance Committee chair Darlene McVeigh proposed an amendment to reduce the town’s over minimum contribution to $665,797.
When asked why, McVeigh responded that the town’s regional assessment had increased over three years by more than 300,000, and now totaled $2,640,085. McVeigh said while she applauded Gateway’s efforts to have facilitated discussions with the towns, the increases weren’t sustainable. The increase to the town in the FY18 budget was $141,000.
Gateway Business Manager Stephanie Fisk, a Huntington resident, said overall the Gateway budget was only up 1%, but the increases to Huntington and Russell were due to their increased share of students. Fisk said both towns each had 266 students, 60% of the student population between them.
Gateway Superintendent Dr. David B. Hopson said that the proposed $67,000 decrease amounted to a $300,000 reduction in the school budget, due to Huntington’s 30 percent share.
The motion on the amendment was then moved, and the amendment to lower the town’s over minimum contribution failed. A vote by ballot was then taken on the article as written, which was defeated 48 to 44. 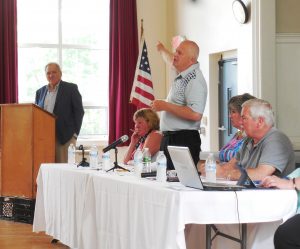 John Baldasaro, chair of the Chester Board of Selectmen, points towards Chester Elementary School while discussing school enrollment. (Photo by Amy Porter)

CHESTER TOWN MEETING HAS FINAL SAY ON VERSION 1
JUNE 10 –Chester also faced an increase in its assessment, but a lower one of approximately $14,000 more than the previous year. When the article for the above minimum contribution came up for a vote on Saturday, Finance Committee chair Andrew Myers offered an amendment to lower the assessment from $413,788 to $348,159. Chester’s total share of Gateway’s FY18 budget was $1,505,860.
When asked from the floor why the figure was reduced, Selectman Barbara Huntoon cited declining student enrollment as one reason the selectmen were supportive of the amendment, which represented level funding to Gateway. Myers added that the district school population had decreased from a high of 1,600 in 1993 to approximately 800 today.
Myers also said although the budget was up 1%, the assessments for all the towns increased by 2.5%, but disproportionately, pointing to Russell and Huntington. “Russell can’t afford that. Our decision is, are we going to join those towns that voted the budget down and said they can’t afford it,” Myers asked.
The vote to amend the assessment passed 48 to 26. The article on the above minimum contribution with the amended figure also passed 48 to 26, defeating the budget.

VERSION 2 FAILS TO PASS AT SPECIAL TOWN MEETINGS
AUGUST 10 – At Russell’s Special Town Meeting, voters rejected for a second time an over-minimum contribution of more than $722,000 to the Gateway Regional School District. Huntington previously rejected Version 2 at a Special Town Meeting the week before.
Gateway Regional Budget Version 2 contained a $7,000 decrease in the above minimum contributions to Huntington and Russell, and $1,000 to Chester. Gateway Superintendent David B. Hopson acknowledged that the amounts they were able to cut for town assessments weren’t what they were hoping for. “There’s not anything left to cut that doesn’t impact student services,” Hopson said.
At the Chester Special Town Meeting the following Saturday, the budget was also defeated by a majority voice count. During the discussion in Chester, a parent asked what the tax impact would be on the town if they were to pass the over-minimum contribution. The parent was told that the increase would be 20 to 25 cents per thousand dollars.
“We’re arguing about a quarter on our kids’ future?” responded that parent.
“It’s no longer let the other towns sink or swim,” said Chester selectman Barbara Huntoon. 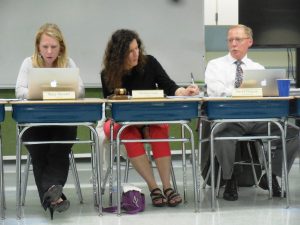 GATEWAY SCHOOL COMMITTEE VOTES ON VERSION 3
SEPTEMBER 14 – At the first scheduled joint budget conference between the Gateway Regional School Committee and officials from the six member towns, Chair Michele Crane began by explaining that unfinished business would go first on the agenda for the six meetings. The unfinished business at this meeting was a vote by the School Committee on Version 3 of the FY18 budget.
Hopson said Version 3 of the budget was $54,000 lower than Version 2, and approximately $100,000 more than last year’s budget. Hopson also said that Version 3, with a bottom line of $16,035,958, would not change the current offerings which the students had already begun taking since school started in September.
“If one more town accepts the budget, then we have a budget,” Hopson said. 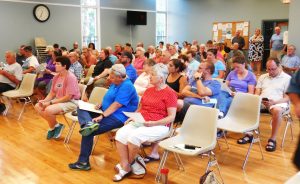 Huntington residents at Special Town Meeting to vote on the Gateway budget. (Photo by Amy Porter)

GATEWAY BUDGET PASSES ON THIRD TRY
OCTOBER 19 – Huntington and Russell scheduled their third votes on the Gateway budget Version 3 on the same night. Russell defeated the Gateway budget for the third time, with a vote of 18 yes and 42 no on the above minimum assessment.
At its meeting, the Huntington Board of Selectmen could not agree on whether to recommend the town’s over-minimum contribution of $703,366 in Version 3. At both earlier meetings, the Huntington selectmen had voted not to approve the budget.
Chair Ed Renauld, the sole incumbent on the board, said at the time of the Annual Town Meeting, the school wasn’t working with the towns on the budget. Since it was voted twice, the district had set up budget meetings facilitated by MARS. “By not passing the budget, why would they work with us,” he asked.
The question was called, and residents voted by secret ballot. In the end, 46 voted in favor of the article, and 37 voted against it, effectively passing the Gateway budget for the current fiscal year by becoming the fourth town to vote for it.
Following the vote, Gateway Business Manager Stephanie Fisk expressed relief. “I’m relieved that we can move on from FY18 and start working with the facilitator on FY19,” she said.