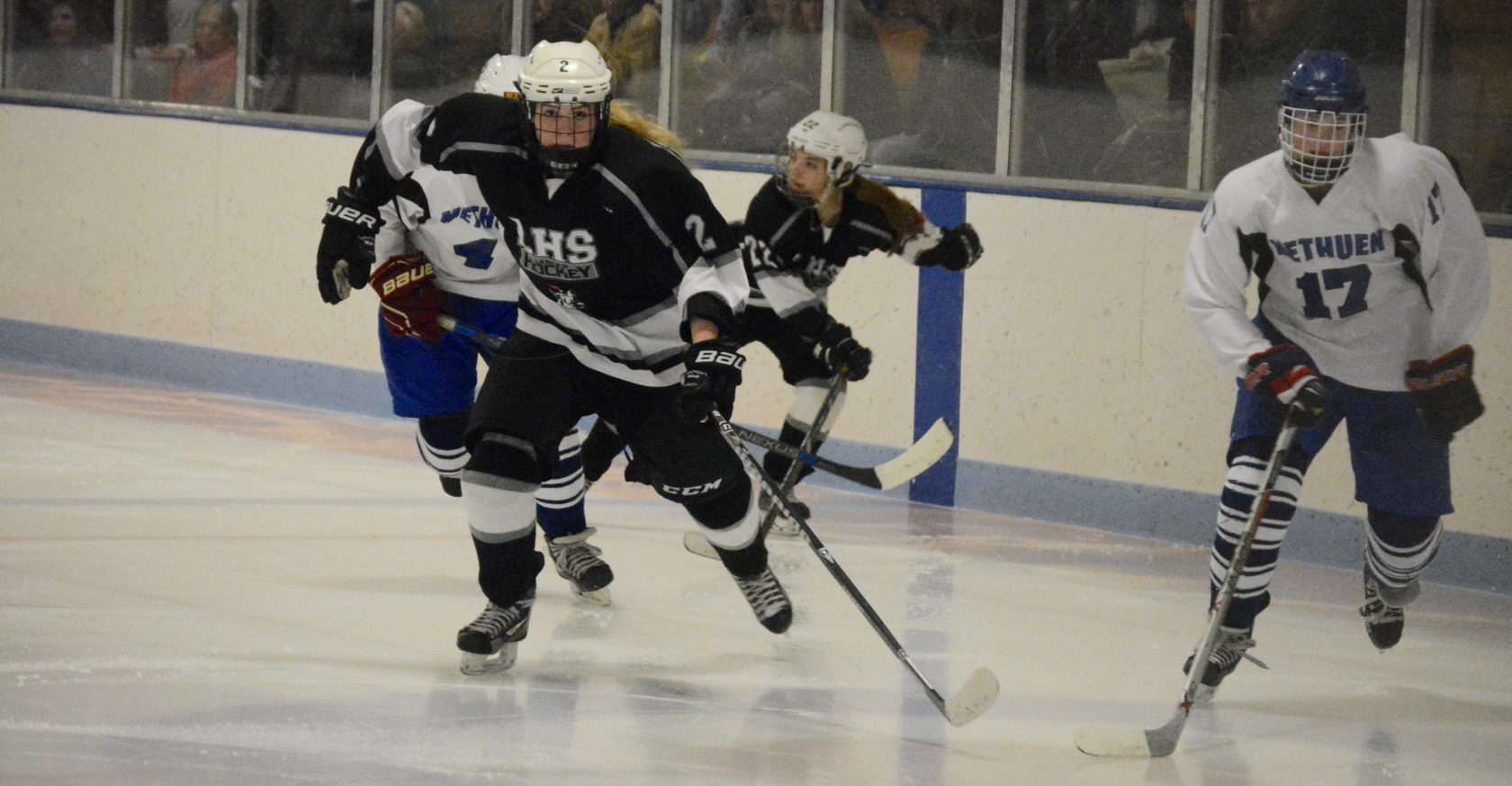 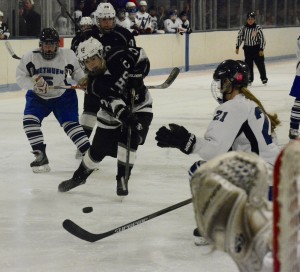 METHUEN – Late in the first period of a second round girls’ ice hockey playoff game Saturday night in Methuen, the Longmeadow (WHS Co-Op) girls’ ice hockey team peppered Methuen-Tewksbury goalie Kaia Hollingsworth.
The relentless effort paid off as a shot from Karalyn Jones rebounded out to Madison Pelletier, who hammered it past Hollingsworth with 47.1 ticks remaining in the period. The Lancers erupted in celebration, embracing each other with hugs and good cheer.
Unfortunately, the goal came with Longmeadow already trailing 3-0, and was the Lancers’ lone score of the game.
Center Kelly Golini had a hand in every one of her team’s scores, scoring a hat trick and dishing out three assists as No. 1 Methuen-Tewksbury downed 17th-seeded Longmeadow 6-1 in a Division 2 tournament game Saturday night at Methuen High School Rink. The Rangers improved to 17-1-3.
“They should probably change their name from the Rangers to the Golinis,” Longmeadow coach David Pelletier said. “We couldn’t stop her. Our girls did everything right, but it was not enough … We hit the proverbial brick wall.”
Methuen build that wall with three goals in the opening nine minutes.
Golini nearly took the opening face-off and scored, notching the team’s first goal 49 seconds into the first period. A little more than three minutes later, she connected with Eryn Taber for a 2-0 lead. Golini made it 3-0 with 6:10 remaining in the period.
Longmeadow failed to take advantage of a power play with under six minutes left in the period, but scored when back at even strength later on. Methuen spoiled the Lancers’ brief shining moment when Golini followed up Pelletier’s goal with a score of her own less than 14 seconds later, tallying her third goal in the period with 29.6 left. 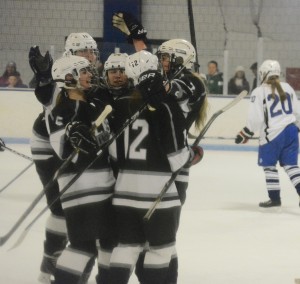 In the second period, Methuen killed off another penalty, and scored two more goals late – both on shots from Eryn Taber and assists from Golini.
Longmeadow goalie Lexi Levere (7 saves) earned a shutout in net during the third period. Kayla Brown started the game in net for the Lancers. She finished with 10 saves.
Coach Pelletier said he decided to go with Brown in net against Methuen because he felt Levere was a bit overworked in the opening round victory.
“This is the farthest we have ever gone in Western Mass.,” coach Pelletier said. “It is a step in the right direction. It didn’t look like it on the scoreboard but the effort was there. We made a couple of bad mistakes. They capitalized on every one of them.”
At times, coach Pelletier even caught himself smirking at the efforts of the sensational Ranger.
“As a fan, it was a pleasure watching Golini,” said the Longmeadow coach, whose players have battled the Rangers’ center over the years at various youth levels.
Longmeadow finishes the season with a record of 12-7-1.