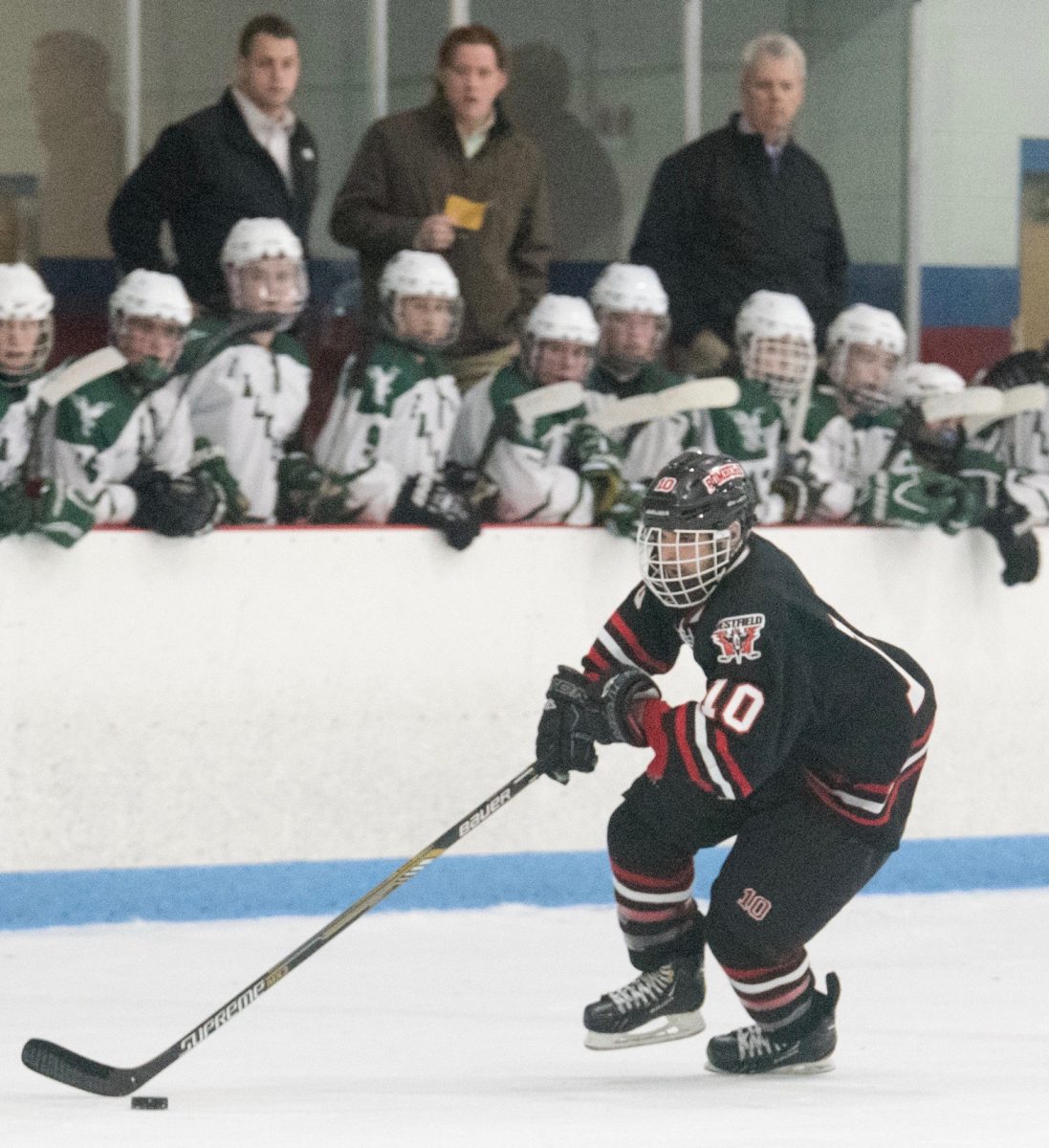 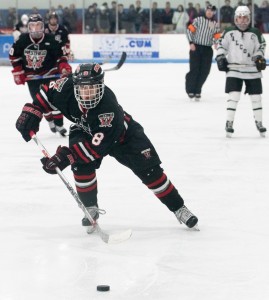 Ryan Porter (8) is on the move for Westfield in the D3 title game. (Photo by Bill Deren)

WESTFIELD – …And so another quest for a state title is about to begin.
The Westfield High School boys’ ice hockey team secured its ninth Western Massachusetts Division 3 title in 15 years with last Thursday’s thrilling 3-2 overtime win over Minnechaug at the Olympia in West Springfield.
Liam Whitman, who earlier in the week helped Westfield knock off top-seeded Longmeadow 3-2 with a game-winning goal in double overtime, provided the heroics again in the finals with a game-winner with 4:49 remaining in OT.
The victory returned the crown back to the Whip City, winners of consecutive titles (2012-13, ’13-’14). 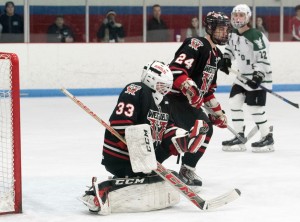 Westfield High School goalie Cameron Parent (33) gets into position to make a save in the Division 3 Western Massachusetts championship game. Defenseman Sean Moorhouse (24) was also a key to the Bombers’ success against Minnechaug. (Photo by Bill Deren)

“You can go on up to the states, but there’s nothing like Bomber hockey players winning Western Mass.,” said 28-year Westfield High boys’ ice hockey head coach C.B. “Moose” Matthews. “Those players are never going to forget that. They will remember who scored 20-30 years from now … Reaching that first goal is something you never forget.”
“In states,” he said. “They’re not even going to remember who they played.”
One name they are going to have to get familiar with real soon is Central Massachusetts champ Algonquin (14-3-5), who stunned the state’s top-ranked team, Shrewsbury (18-3-1) en route to winning the CMass title by defeating Groton-Dunstable (14-4-4), both 3-2 shootout thrillers.
The two teams will meet Thursday in a state semifinal at the MassMutual Center in Springfield, beginning at 5:30 p.m. 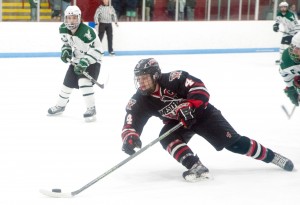 “I feel sorry for the teams that have to lose by shootout,” coach Matthews said. “That’s not real hockey … (but) we better be ready. (Algonquin) has guys who can put the puck in net. We don’t want to go into a shootout with them. We want to win it (in regulation).”
Westfield is seeking a record-tying fourth state title in Division 3. The Bombers won state championships in 2003, 2008, and 2013.
Before Westfield looks ahead to potentially facing northern champ Wayland (14-6-4) or southern champ Hanover (20-3-1), the Bombers will have to deal with Algonquin.
“Teams are much stronger today than they were 20 years ago,” Matthews said. “The speed of the game has increased. 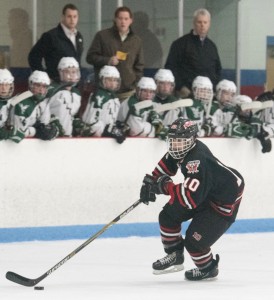 Bombers’ Max Bengston (10) pushes the puck up the ice as the Falcons’ bench looks on during the 2015-16 West Sectional boys’ ice hockey championship last Thursday at the Olympia in West Springfield. (Photo by Bill Deren)

Players are stronger … The parity this year was astronomical.”
Westfield has defied the odds before. In fact, the Bombers, who finished the regular season 9-10-1 needed to win a tiebreaker against Ludlow just to qualify for this year’s postseason.
What is there stopping them from making another unprecedented run?
“Coming in as the fourth seed and winning Western Mass is something these players are not going to forget,” Matthews said. “They got in by the hair on their noses. Good things happened because they wanted it.”
The only question that remains now is – who wants more?