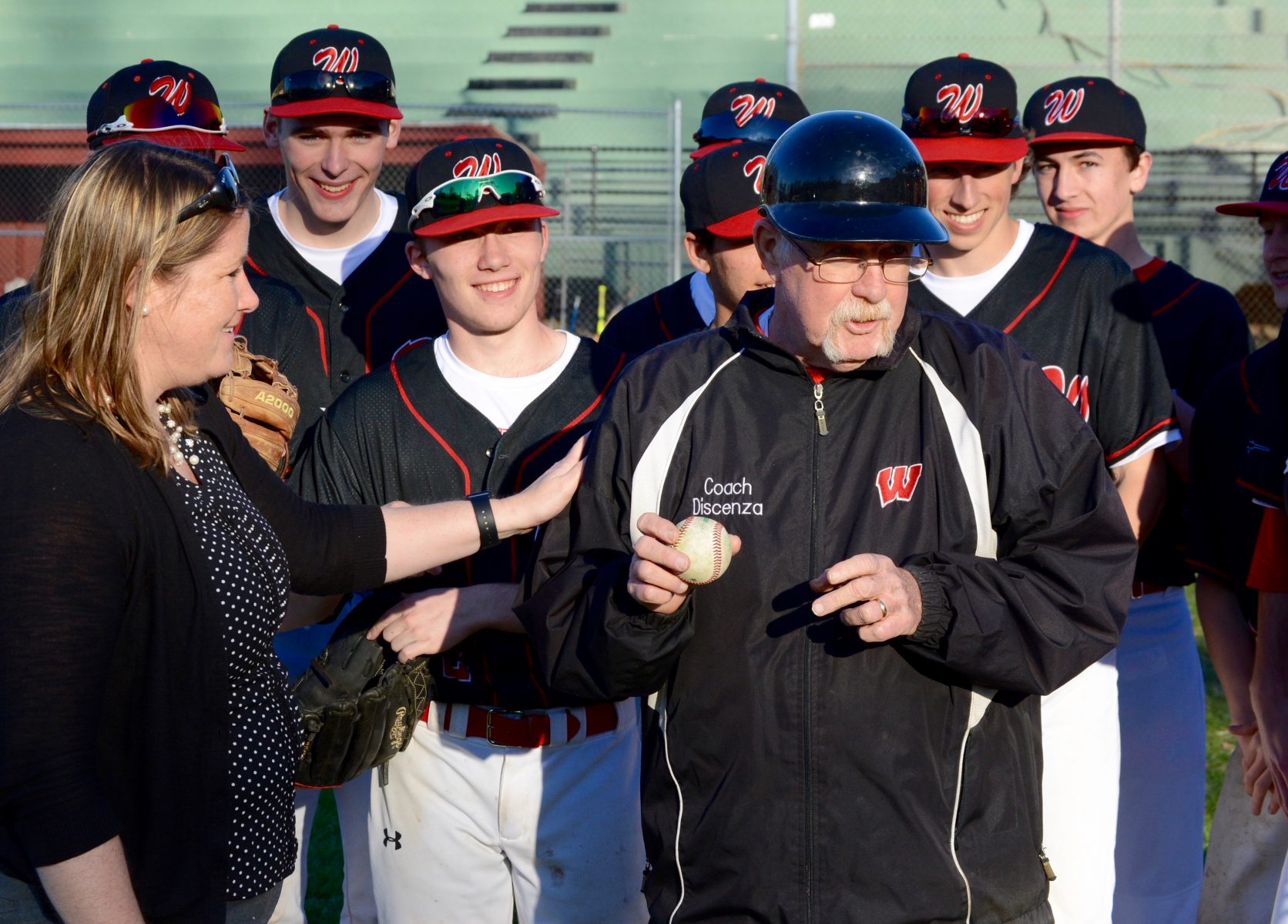 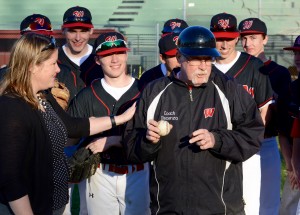 WESTFIELD – In eight seasons as head coach of the Westfield High School head baseball team, Rich Discenza has won three Western Massachusetts championships. During his coaching tenure, a career that dates back to 1975 and spans 19 seasons (eight as head coach at Cathedral), Discenza has compiled a breathtaking amount of victories.
On Thursday, in front of a packed home crowd of fans – some of which included former players, alumni, and notable local legends like former coach Tom Sgroi – Discenza recorded win No. 200.
Discenza and the Westfield Bombers upended preseason favorite Central, the defending WMass champs, 10-3, at Bullens Field.
It was an inauspicious start for Westfield (2-0) and starter Dalen Mochak, who allowed two consecutive hits to Central to begin the game. The Golden Eagles jumped out to a 2-0 lead.
The Central lead was short-lived, however, as Westfield battled back in the home half of the inning with consecutive base hits from lead-off batter Austin St. Pierre, No. 2 hitter, Jacob Colapietro, No. 3 batter Sean Murphy, clean-up hitter Anthony Clark, and Tony Riga. After a Sean Moorhouse walk and Matt Hastings single, the Bombers led 4-2. 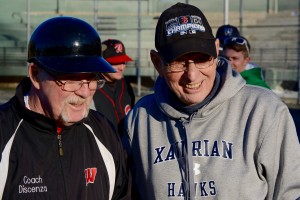 Westfield increased its lead to four runs with two more in the second. Central scored one in the third – its last – before the Bombers tacked on one in the fourth and three more in the fifth for a 10-3 lead.
St. Pierre highlighted the fourth by smacking a triple, and scoring on a Colapietro sac-fly.
Westfield pitcher Ari Schwartz came on in relief in the latter innings and shut down Central.
Afterwards, Discenza was recognized for his accomplishment. Westfield High athletic director Eileen Flaherty presented the Bombers’ coach with a game ball to a rousing applause, and he received several congratulatory handshakes.
“This has nothing to do with me,” said a reserved coach Discenza, following the milestone victory. “We’ve had great kids here. Look at the number of kids playing baseball at college. That’s what we’re trying to get done.”

SOFTBALL
Lachtara, Rams post shutout
Southwick 13, Mahar 0
Katelyn Sylvia went 2-for-3 with two doubles and two RBIs, Steph Devine went 2-for-3 with a run and RBI, and Sydney Rogers scored four runs in a big offensive day at the plate for Southwick.
Rams’ pitcher Emily Lachtara pitched a one-hitter, striking out six batters in a mercy-shortened contest. Gillian Ensign had one strikeout in one inning of relief.

JV RESULTS
The Southwick JV softball team bounced back from a 26-14 road loss to Palmer by defeating Granby convincingly Wednesday, 21-8.