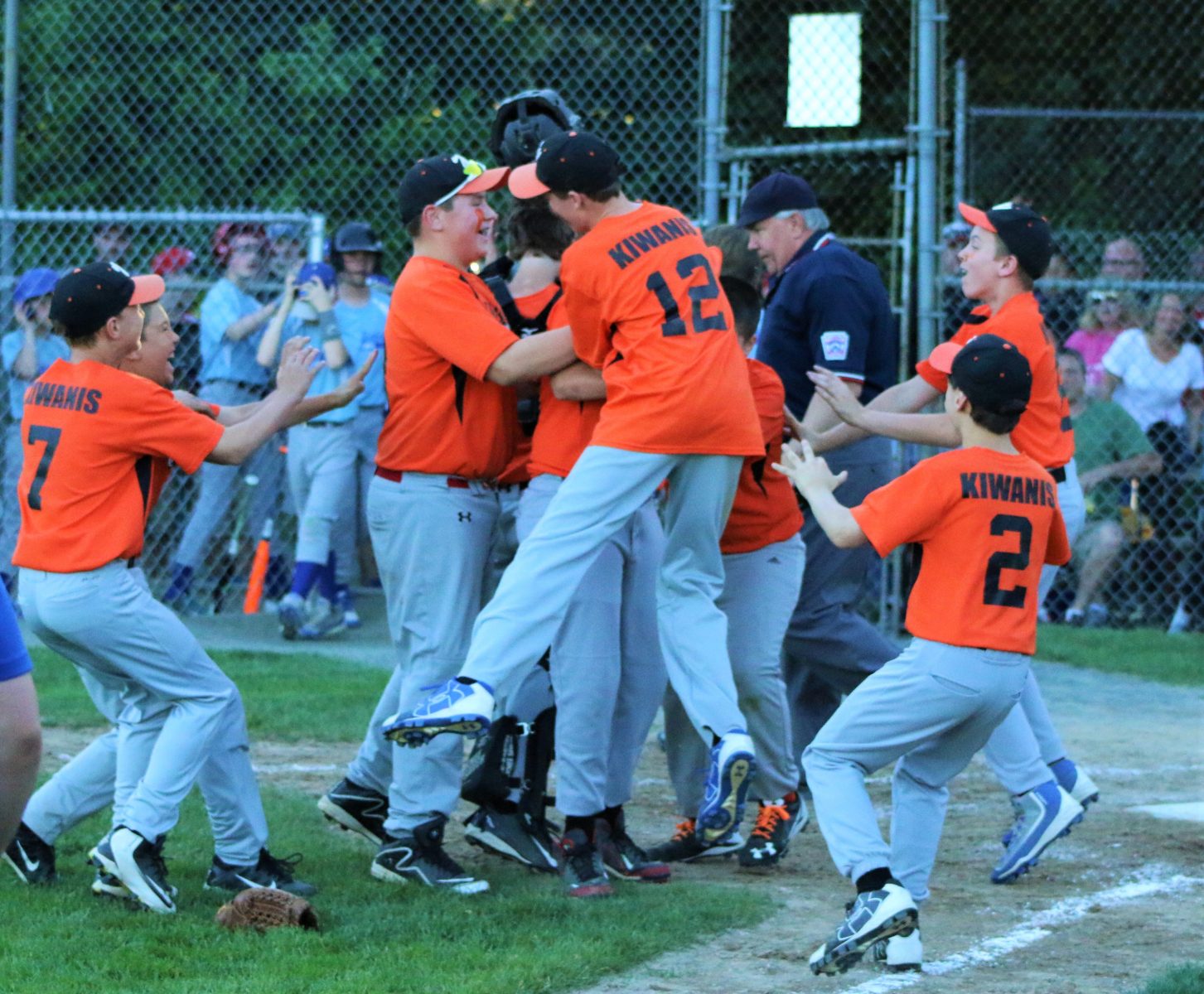 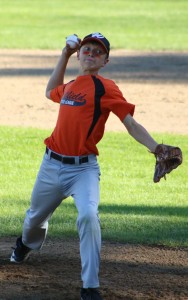 WESTFIELD – There really is no better way to snap a tie in a rubber match on the biggest stage.
No. 4 Kiwanis swung the season series against second-seeded Commercial in their favor (2-to-1) with a 6-3 win in the Little League Baseball City Cup championship game Tuesday night at Ralph E. Sanville Field on Cross Street.
The game did not fail to disappoint as both teams combined for a thriller, setting the tone for the upcoming All-Star season.
Commercial (14-7) struck first when Colby Nadeau scored on a Jay Scherpa sacrifice hit in the top of the first inning. 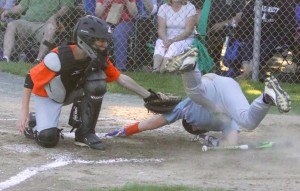 Kiwanis completes a 6-3-2 double play with a tag at the plate against Commercial. (Photo by Kellie Adam)

Kiwanis (14-7) responded in a big, big way – belting two solo home runs (one each from Riley Sullivan and Cam Hoynoski) – for a 2-1 second-inning lead.
“It was 3-2, he gave me (a pitch) right down the middle,” Sullivan said. “I knew it was coming, so I swung and it went over the fence.”
In the third inning, Kiwanis tacked on a run. Colin Cusak walked. Anthony Schabowski hit a one-out bloop single. Dylan Arooth belted a hopper into the chest of the second baseman that scooted away for a base hit. A wild pitch and a Joey Calderella RBI single made it 4-1.
Kiwanis’s defense flashed some defense in the fourth.
Commercial’s Jay Scherpa ripped a one-out double in the bottom of the fourth with a blast to the left-center field fence. Just when it looked as if they would trim the deficit, Kiwanis turned a sterling 6-3-2 double play.
Commercial continued to fight back. 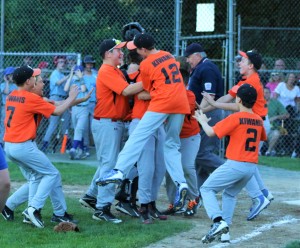 Kyle Scherpa beat out an infield single to open the fifth. It appeared he was rewarded for his hustle, ruled “safe” on a close play at first base. The Kiwanis defense tired a bit, allowing Commercial to get back into it with two unearned runs.
Kiwanis tacked on two insurance runs in the top of the sixth. Dylan Arooth blasted an RBI triple and Calderella hit a run-scoring single to make it 6-3.
Commercial caused some noise in the bottom of the sixth with runners on, courtesy of a Colby LaPoint walk and Jay Scherpa single. Kiwanis reliever Calderella elevated his game though, striking out the next two batters to earn the save and end the game.
“It was pretty exciting,” Sullivan said. “I’ve been waiting for this all three years.” 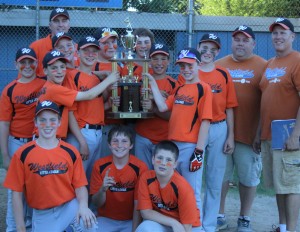 For Kiwanis, it was their second title in the tournament’s four-year existence. They last won in 2013.
It was the first City Cup championship for Kiwanis manager Jim Cloutier, whose team went 5-14 three seasons ago.
“To see Joey Calderella come in and get the save on the big stage and for Riley to pitch the way he did, they came tough and got it done,” coach Cloutier said. “We will take it from there, and hopefully roll right into the districts.”
Cloutier will coach the Westfield National 12-Year-Old All-Stars this summer. District tournaments for area All-Star clubs are expected to get under way late next week.
BABE RUTH UPDATE: The Westfield Babe Ruth Dan Welch City Cup playoffs (15-16-year-olds) will continue Wednesday night with the loser’s bracket final, beginning at 7 at Bullens Field.
The championship game will be held Friday night at Bullens at 6. If the loser’s bracket champ wins, a second game to determine the winner will be held at 8 p.m.