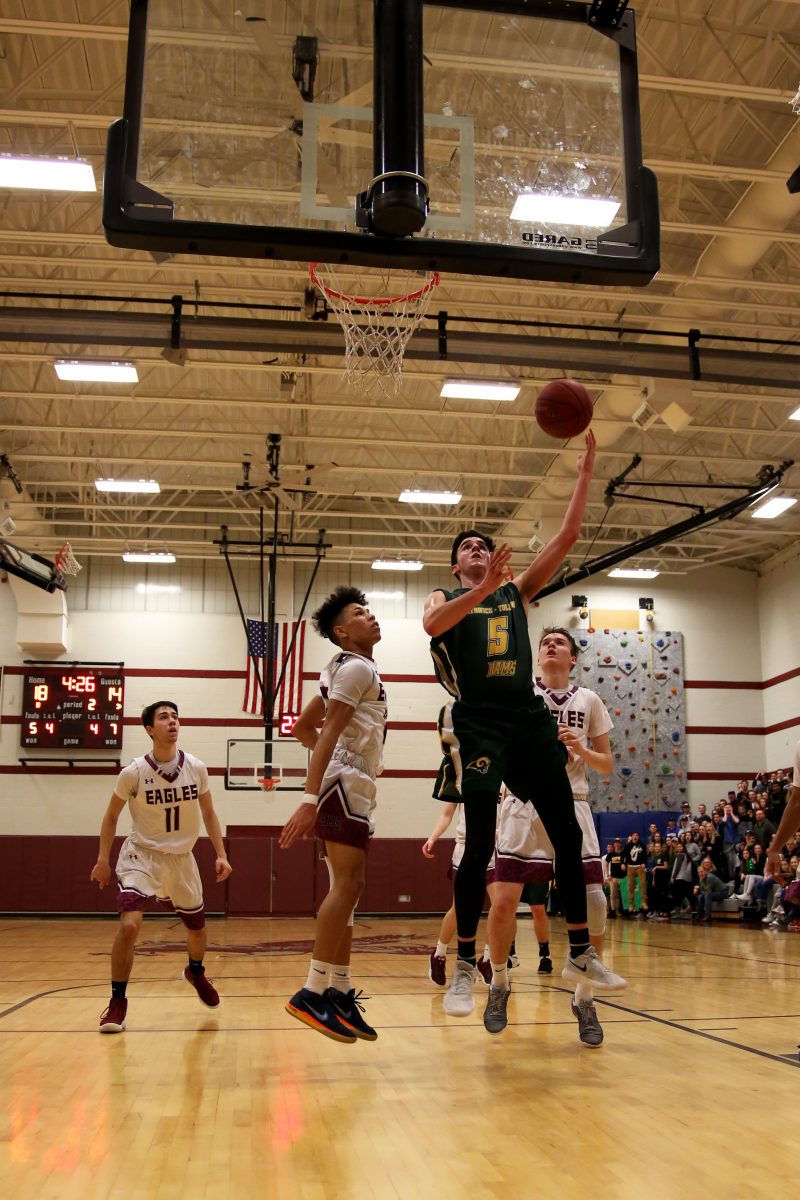 EASTHAMPTON – The Southwick High School boys basketball team showed grit, resiliency and true talent in their latest postseason game, but in the end ran out of steam … and players.
Four Easthampton players scored in double digits and the second-seeded Eagles held off No. 7 Southwick 71-57 Saturday. The Rams failed to back down at any part of the game and thus ran into foul trouble late with three players fouling out.
“I’m very proud of every single person and those on our bench,” said Southwick assistant coach Peter Fiorentino. “It was an incredible challenge playing the number two team.”
It was a challenge they met head on. 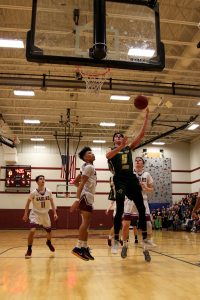 Southwick’s Timothy McGrath (5) gets through a couple of defenders and lays it up for two on the road against Easthampton in a West Division 3 boys basketball quarterfinal Saturday. (Photo by Randy Burlingame)

After falling behind by double digits early in the game, Southwick (15-7) battled back to take a lead at the half, 23-22.
Southwick came out firing in the second half, going on a 10-0 run as Connor Roy completed a four-point play by making an and-one on a 3-point shot. Hunter Iglesias followed with consecutive 3-pointers, forcing Easthampton to take a timeout with the Rams leading, 33-22.
Easthampton came out of the short break, and stormed back to tie the game with a 3-point shot and a put back from Zade Jenkins. Ronan Mottor’s two made it 33-all.
With every big shot that followed, the sellout crowd got a little louder. The stakes were raised every minute that went by, and Southwick delivered.
Iglesias converted a three to give Southwick a 3-point cushion. With the score tied at 38-38, Roy made a beautiful spin move out near the free throw line, dribbled in between two defenders and drew a foul. He hit the first of two free throws to go up one.
Easthampton responded with an 8-0 run. The Eagles continued to build on their lead in the fourth quarter, and nearly took a double-digit lead midway through the quarter but Danny Scharmann hit a three with 3:54 left to pull Southwick within 62-57.
Easthampton closed out the game with a 9-0 run, hitting 5-of-11 from the foul line, one of which came on an and-one to end the scoring.
Ant Moynihan finished with a game-high 17 points for Easthampton. Eagles’ Sopie Pek had 16, and Mottor and Darnel Whitley contributed 12 apiece.
Scharmann led Southwick with 15 points, followed by Iglesias (14 points) and Roy (13).
“I think this just goes to show the character of our kids working through adversity,” said Fiorentino, referring to the abrupt resignation of head coach Dylan Dubuc late in the regular season. Joe Turmel, the school’s principal and a former athletic director of St. Mary’s, served as interim coach during that stretch. “We weren’t going to come in here and get rolled. …It was a tremendous effort.”