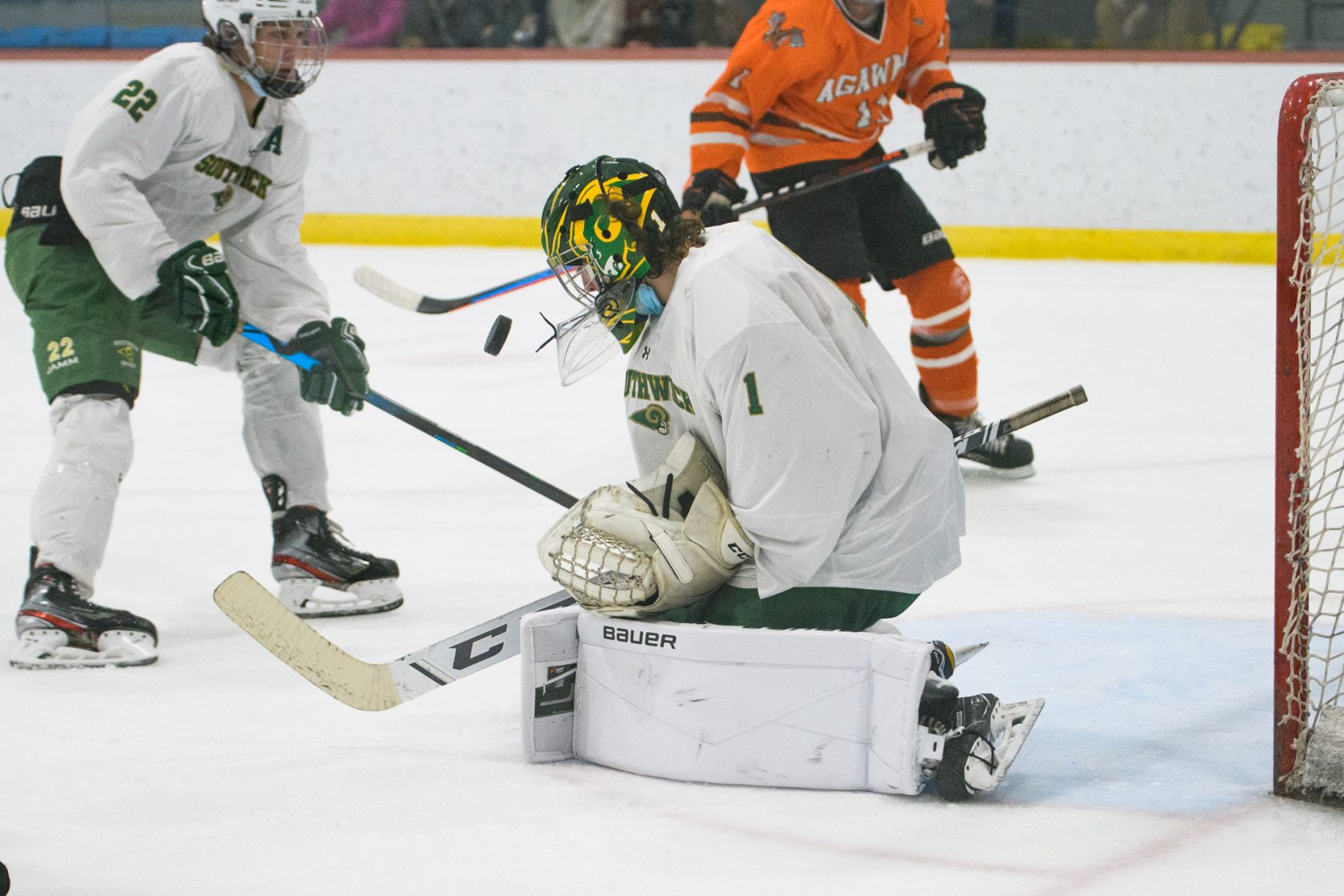 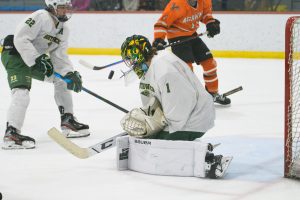 Southwick goalie Andrew Morris (1) keeps the puck in front of him for a save during a preseason game against Agawam on Dec 3. (BILL DEREN/THE WESTFIELD NEWS)

SOUTHWICK – Six years ago, the Southwick Regional High School boys ice hockey team was in its infancy, learning to skate with one another for the first time. The Rams grew up but struggled to a one-win, COVID-shortened season a year ago. Now, they are about to get an assist.
This past offseason, the Massachusetts Interscholastic Athletic Association approved a co-operative agreement for the Southwick hockey program, opening the doors to student-athletes from St. Mary’s and Westfield Technical Academy. The three schools have already partnered up and are now ready to compete.
“There’s only one place to go and that’s up,” Southwick Regional boys ice hockey coach Gary Whittier said. “We have some good, young kids (from Southwick). The kids coming in from the other schools are going to help us.”
Four players from Southwick (freshman Sean Johnson, sophomore Evan Grant, junior David Forrest, and senior Jake Marcoulier) and two from St. Mary’s (sophomore Gavin Connors, senior Ryan Major) will join the Southwick boys ice hockey program this season.
The influx of new talent should help take some pressure off of senior goalie Andrew Morris, who has served as the team’s last line of defense since seventh grade, the team’s inaugural season.
“Andrew has had a lot of opportunities to grow,” coach Whittier said. “He worked hard this offseason.”
Early indications are that Morris is solid and could be in store for a sensational senior season in between the pipes. The Southwick goalie will be helped out by two very solid defensemen – senior Aidan Jubb and junior Liam McKellick.
While the defense figures to be one of the team’s strength throughout the 2021-22 season, there is great optimism for the offense. Senior forwards Tommy Whalley and John Lacey return. They will be joined by returning senior starter Jesse Johnson. Other young talented players are also in the mix, according to Whittier.
Southwick is expected to run a game based off of puck possession and a strong drive to the net.
“A lot of people don’t realize how much that can change a game for you,” coach Whittier said. “There are a lot of better things you can do with the puck than just slapping it off the boards. Why create a 50/50 situation when you can pass the puck up the ice.”
The Southwick boys ice hockey team will be playing for a postseason berth for the first time in school history. The Rams missed the Western Massachusetts tournament by one game just prior to the pandemic and then COVID-19 concerns canceled their follow-up chances the next year. Now, they will play for a spot in WMass and the newly-redesigned Division 4 state tournament.
Southwick will play out of the Wright Division this season with two games each against the likes of Greenfield, Belchertown, Easthampton, Drury, and Mt. Everett. The Rams will open up against the Belchertown Orioles Saturday at the Mullins Center in Amherst. The puck drops at 6 p.m.
A power ranking system will determine the top seeds in Western Mass. Every team with a .500 or better record in the regular season qualifies for the state tournament.
IN OTHER RAMS SEASON OPENERS: The Southwick girls basketball team opens the regular season Dec. 13 at home against Easthampton. The Rams boys basketball team begins its season on the road against Turners Falls Dec. 21. Both games tip off at 7 p.m.