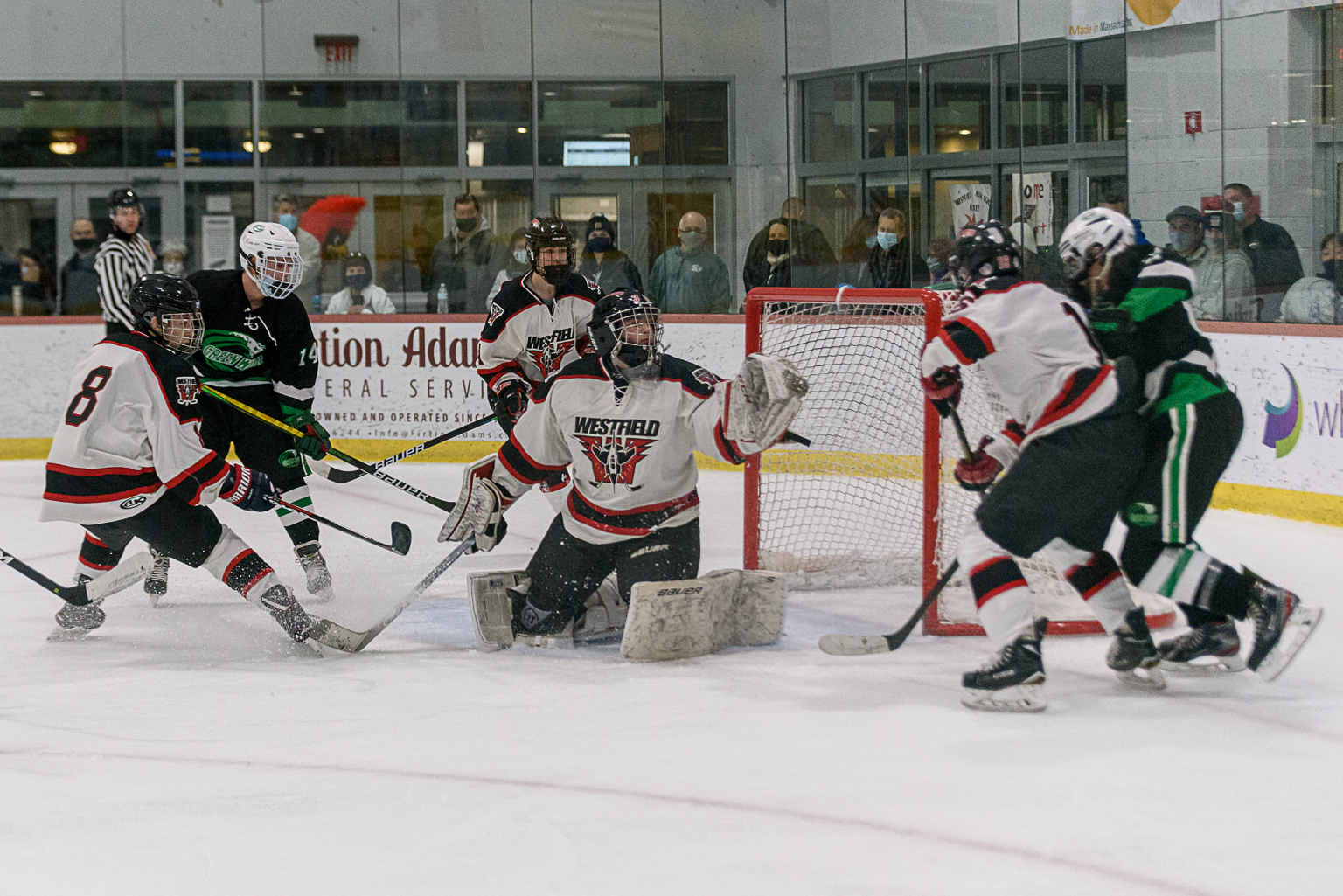 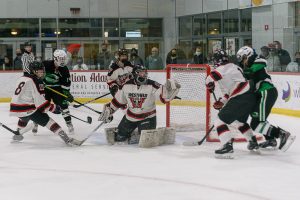 WESTFIELD – Amelia Park was awash in a Green Wave for much of Friday evening but eventually it gave way to a red tide.
The Westfield Bombers scored two consecutive goals within a 49-second span to rally from a one-goal deficit to narrowly defeat the Greenfield Green Wave in a high school boys ice hockey game Friday night, 3-2.
After somewhat of a flat first two periods, Westfield received its wakeup call early in the third period when Greenfield’s Kevin Baumann rang the puck off the inside of the right post into the back of the net for a power play goal. The goal came with just eight seconds remaining on a power play.
Fortunately for Westfield, it was Greenfield’s only power play goal of the game. The Bombers successfully killed off six previous power play chances for the Green Wave, five of which came in the second period alone.
With both teams finally at full strength, Westfield scored on a goal from Aiden Poirier with 9:39 remaining in regulation. Gavin Bilodeau and Blake Cavallon assisted. Forty-nine seconds later, Francis Powers scored the game-winner for the Bombers when he redirected a shot into the net. Drew Glenzel took the initial shot from just outside the left circle, squeezing it through the narrowest of windows in the Greenfield defense. Sawyer King also earned an assist.
“(Our players) persevered,” Westfield boys ice hockey coach Dave Pelletier said. “We struggled from the minute the puck dropped. It took us three periods, but I think we figured it out.”
“At the end of the day,” he said, “there was just no quit. I wouldn’t have been surprised if a team just said ‘hey, it’s not our day,’ but they rolled up their sleeves, went to work and found two goals.”
Tyler Kutt had the other Westfield goal early in the game, scoring at the midway point of the first period. Matt Kotfila set up the play with a pass from behind the net, out front to Kutt who quickly slammed it home. Brandon Shuman also assisted.
Westfield freshman goalie Evan Mastroianni made more than a dozen saves in his varsity debut to earn his first victory. Mastroianni has big skates to fill this season, taking over for star goaltender C.J. Czarnecki, who graduated last spring.
“They threw everything but the kitchen sink at that kid,” coach Pelletier said of his new goalie. “We tried to do a good job of keeping the second shot away from him but that didn’t happen quite often. They were getting first and second chances, especially early in the game. Without him, it would probably be 3-0 them.”
It was a sweet victory, not only for Mastroianni, but for the team’s penalty-killers.
“We have two penalty kill units,” coach Pelletier said. “I hand out oranges in the locker room (after the game). The first thing I did was hand them the whole bag. I said, ‘No one touches this until they get their share.’”
Coach Pelletier said although his team committed several penalties in the game, they were not egregious. He said once the players get up to game speed – the preseason was cut short due to a rise in Covid cases in the community – the penalties should subside.
“It was a little bit nerve-wracking,” Mastroianni admitted. “I’m trying to be exactly like C.J. I want to do exactly what he did – come to this school and shut people down. I can’t do it without the fans, teammates. I can’t do it without any of them. It’s all a team effort.”