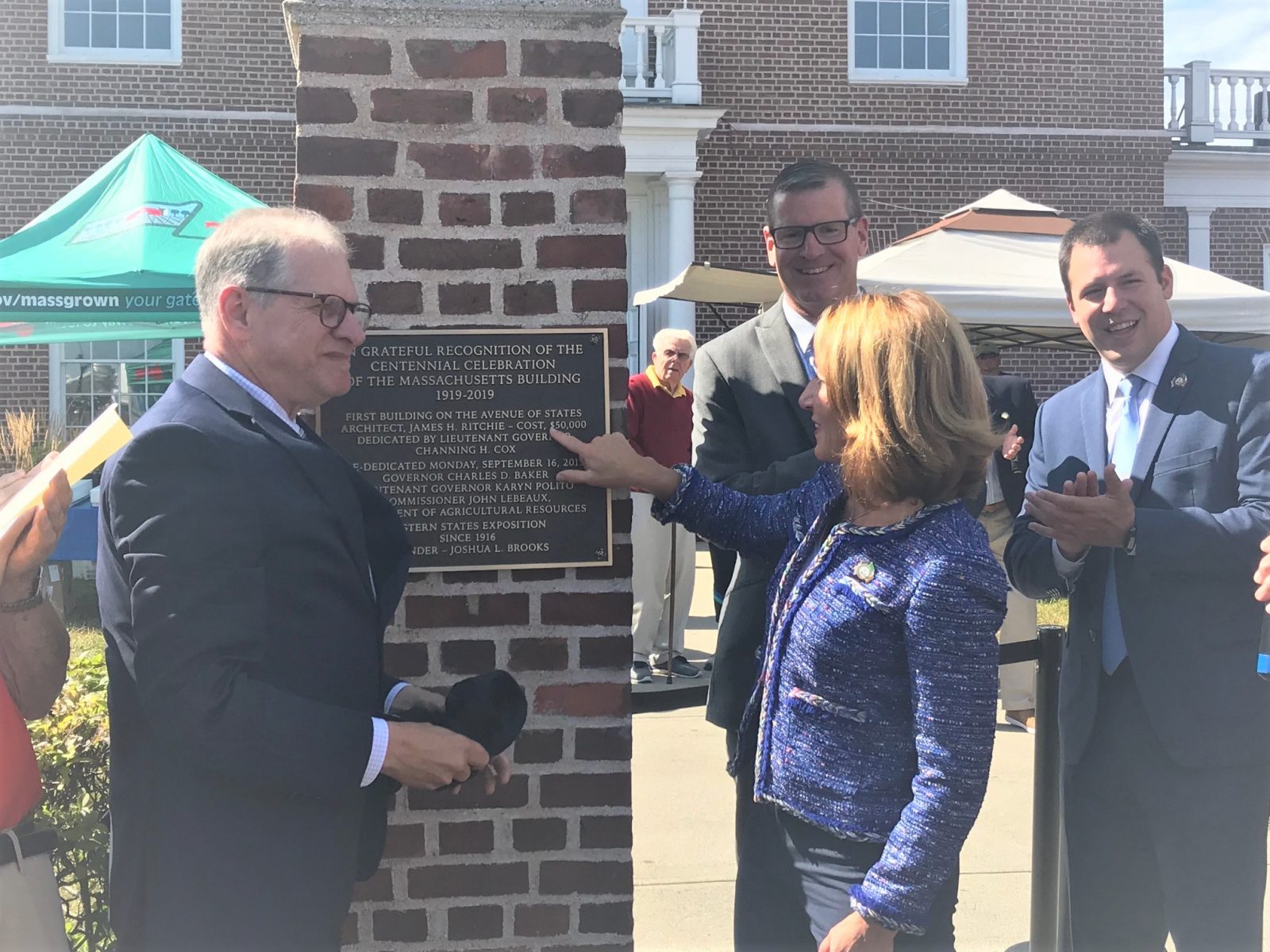 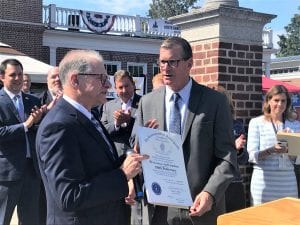 WEST SPRINGFIELD – The Massachusetts Building at the Big E turned 100 Sept. 16 with a celebratory rededication ceremony.

Lt. Gov. Karyn Polito and Department of Agricultural Resources Commissioner John Lebeaux were joined by members of the House of Representatives, Senate and local officials Monday as they feted the first building built on the Eastern States Exposition’s Avenue of States.

The building was originally intended to be an incubator for the economy and Polito said it still serves that purpose today.

“This building is a very special place,” she said. “I call it an incubator because many people start their business in their home or garage and bring it here on the lawn, then they come inside the building, then they expand. It’s an incubator of talent and small business.”

Polito said she was happy to be at the fair Monday morning.

When the building was originally dedicated, the governor at the time, Calvin Coolidge, could not attend because of the police strike in Boston and the lieutenant governor attended the ceremony. Polito said she was happy to continue that tradition.

“I couldn’t be more proud as the lieutenant governor in 2019 to mark this moment,” she said. 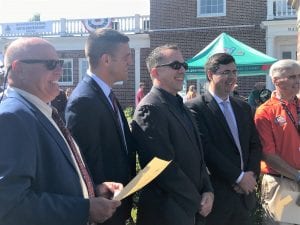 Legislators, including Westfield’s John C. Velis, second from left, attend the rededication of the Massachusetts Building at The Big E. (Photo by Hope E. Tremblay)

Welch noted that the Massachusetts Building was a replica of the State House in 1919.

“Because it’s a replica, for years I’ve been pushing to have a legislative session in this building,” Welch said, joking that he wanted his colleagues from the eastern part of the state to know what it’s like to drive across Massachusetts regularly. He added that both Polito and Gov. Charlie Baker are often in western Massachusetts and thanked them for working for local residents.

“It was a pleasure to join Lt. Gov. Polito, Commissioner Lebeaux and my legislative colleagues from Western Massachusetts today as we celebrated the 100th anniversary of the Massachusetts State Building and re-dedicate it for the future,” Humason.

The Western Mass legislative delegation supported an appropriation in the state budget to help maintain and keep the Massachusetts Building in good welcoming condition.

Humason continued, “The Avenue of States has always been one of my favorite destinations at The Big E and the Mass Building is the star of the Avenue.”
The Eastern States Exposition draws well over a million visitors every year. Velis said turning 100 is a big deal. 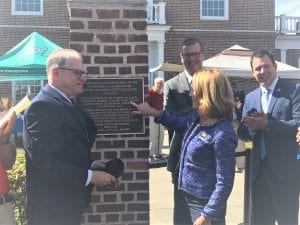 “What a great milestone for the Massachusetts building. When you stop and think about the number of people who have stepped foot in that building over the past 100 years, it’s truly remarkable. A big thank you to the lieutenant governor for taking the time to show up and participate in the ceremony,” Velis said.

Eastern States Exposition President Eugene J. Cassidy spoke about the uniqueness of the Avenue of States.

“This is the only place in the country where one state owns property within another state,” he said, referring to the fact that every New England state building and the property it sits on along the Avenue of States is owned by that state.

Several speakers reflected on the agricultural origins of The Big E, including Cassidy who took the opportunity of having the attention of legislators to make a plea for funding for farmers.

“Our farmers are suffering,” he said, “and when farmers suffer, it affects all of us.”

Lebeaux said a time capsule would be buried and he hoped that on Sept. 16, 2119 whomever opened it would find meaning in the items placed inside, which included a replica of the building.

“We wanted to do something extra special,” Puppolo said before Lebeaux and Polito unveiled a plaque leading into the Massachusetts Building property.