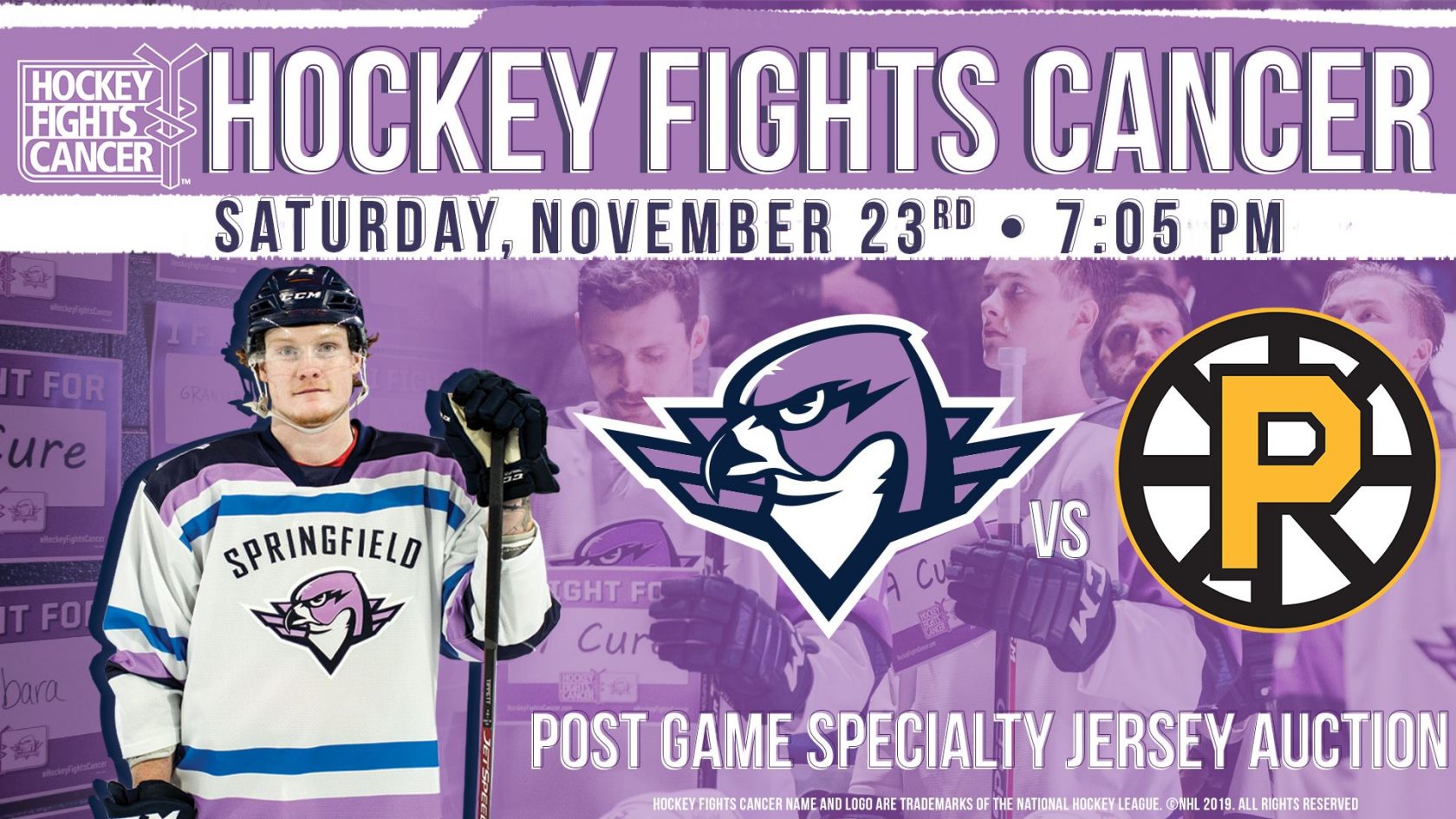 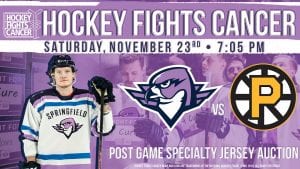 SPRINGFIELD – The Springfield Thunderbirds are proud to partner with the National Hockey League’s Hockey Fights Cancer initiative for their game this Sat., Nov. 23 at 7:05 p.m. against the Providence Bruins inside the MassMutual Center.
Founded in 1998 by the NHL and the NHL Players’ Association, the Hockey Fights Cancer initiative unites the hockey community in support of cancer patients and their families, with assists from players, coaches, officials, equipment managers, front office staff, corporate partners, and fans.
For a second straight season, and with the support of the American Hockey League and the NHL, the Thunderbirds will be using the funds generated from Saturday’s Hockey Fights Cancer night to help support a number of local Springfield area causes. The primary fundraiser will be the postgame jersey auction on Saturday following the game at ice level. Fans interested in bidding on these specialty jerseys will be asked to gather in the upper portion of Section 9.
This year’s headlining benefactor from Hockey Fights Cancer is the Tammy Jacobson-Landon “I Can Hear You Now” fund, set up in conjunction with The Clarke School for Hearing and Speech.
Jacobson-Landon, the daughter of Springfield hockey icon Bruce Landon, passed away in February from a rare and aggressive form of cancer at the age of 43. She dedicated her life to her career as a grant writer for The Clarke School. Her father, Bruce, and mother, Marcia, established the “I Can Hear You Now” fund in the days following her passing.
“The Landons will always be an important piece of the hockey fabric of Springfield,” said Thunderbirds President Nathan Costa. “We continue to share in their grief following Tammy’s passing. Tammy lived life with a deep sense of purpose, and we are proud to be able to honor her memory during Hockey Fights Cancer night.”
For Thunderbirds captain Paul Thompson, Saturday’s game will hold extra meaning as well. After the game, his #15 jersey will be auctioned to directly benefit “Angela’s Army,” a fundraising initiative started by Thompson’s cousin, Angela Augusta, who was diagnosed with Hodgkin’s Lymphoma last year. Since her diagnosis, she has raised funds to create “care packages” to provide comfort to fellow cancer patients undergoing treatments.
In addition to the “I Can Hear You Now” fund in Tammy’s memory and “Angela’s Army”, the Thunderbirds will also contribute to various local charitable efforts, including: Griffin’s Friends , Mercy Hospital, CHD Cancer House of Hope, Survivor Journeys, Chris Thibault’s Fight and Springfield Thunderbirds’ Relay for Life Team.
For more information on Hockey Fights Cancer Night, call (413) 739-GOAL (4625) or visit www.SpringfieldThunderbirds.com. – Courtesy of Springfield Thunderbirds