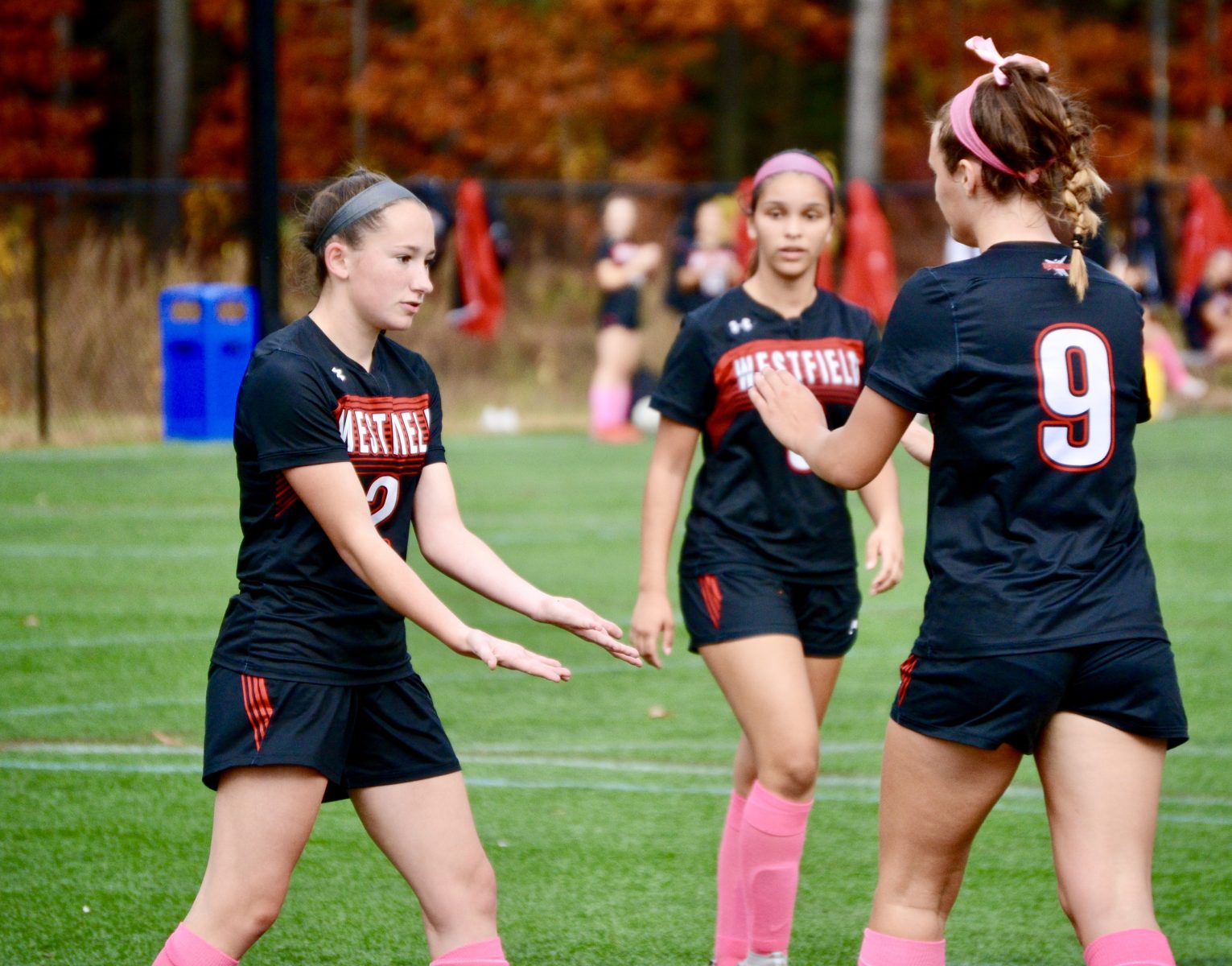 WESTFIELD – The Westfield High School girls soccer team has been on a run of epic proportions.
Westfield (17-2-2) put together a phenomenal regular season that consisted of 14 wins, two losses, and two ties, earning the No. 2 seed in the West Division 1 tournament. Only Minnechaug was better, going 16-1 to draw the tourney’s top seed.
Westfield and Minnechaug split the season series 1-1 with each side enjoying a narrow 1-0 victory. Thus, it was no surprise that each team dispatched their first postseason opponent with relative ease before crossing paths one more time. In the semifinals, the Falcons shut out the Agawam Brownies, 4-0, while the Bombers eliminated the West Springfield Terriers, 4-1, setting up a classic final between the two schools.
Minnechaug proved to be a huge thorn in the side of Westfield in the days leading up to the soccer finals. The Falcons toppled the Bombers in football, gymnastics, and girls volleyball. That being said, the Whip City would not be denied. 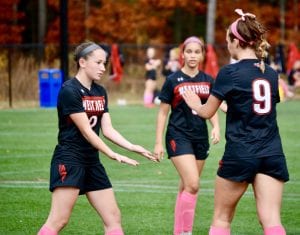 The Westfield Bombers girls soccer team has had a lot to celebrate this season. They will try to cap it all off with a state title Saturday night against Bishop Feehan at Worcester State University. Game time for the D1 finals is 5 p.m. (Staff File Photo).

In the Western Massachusetts championship, Catie Bean delivered the heroics. Bean went coast-to-coast with the ball down the right sideline, kicking it ahead to herself with a defender hot on her heels, collecting the ball deep in the box, and going opposite corner in the waning minutes for the game-winner. Westfield 1, Minnechaug 0.
In the state semifinal, it was Chandler Pedolzky who provided Westfield’s highlight-reel play, lofting a game-winning shot over the head of the goalie in overtime to down Central Mass champ Algonquin 1-0.
There were other unsung heroes in Westfield’s path to glory like goalie Adrianna Arona, who has allowed just one goal this entire postseason and posted two straight shutouts, and others like hard-working forward Kaela Mochak and Chandler’s twin sister Emma, whose hard work around the midfield has kept the defense glued together and the offense churning upfield.
While this team’s journey is taking them to new heights, there is still one small step (or a rather large one, depending on one’s perspective) to the coveted holy grail, the almighty state Division 1 championship crown.
“Competing for a state championship is a special moment, a moment that needs to be cherished,” Westfield High School athletic director Ryan Dunphy said Friday.
Westfield will collide with unbeaten Southern Massachusetts champ Bishop Feehan (22-0-1) Saturday night at Worcester State University at 5.
“The girls have worked so hard, not only this year but ever since they started playing as kids,” Dunphy said. “High school sports are great because you’re not only representing yourself, you’re representing your school and your entire community. I hope the girls are able to cherish this moment because I know they have the support of the entire school and the community.”
Students and staff came together at Westfield High School during the final period of school Friday for a send-off rally for the team. A school bus will also be taking a student cheering section to the game.