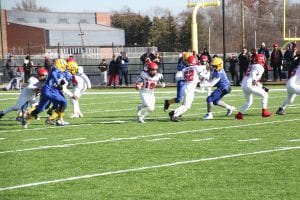 CANTON, OHIO – It was the experience of a lifetime.
The Westfield Youth Football Junior Bombers departed the Whip City late on a Tuesday night and arrived in Canton, Ohio around mid-morning the following day.
Westfield joined 64 other teams, comprised of children of all ages, from the around the country and Canada at a live press conference featuring guest speaker, Hall of Famer Rod Woodson (Pittsburgh Steelers).
The group toured the Pro Football Hall of Fame, and attended multiple presentations.
Westfield then got to business, competing in the 11U unlimited weight division which divers from the regular season format of the SAFL. The biggest difference is the weight limit for skill players and ball carriers in the SAFL is 115 pounds. At nationals, the Bombers faced ball carriers weighing up to 185 pounds.
In the opening round, Westfield drew the Northeast Pensacola (Fla.) Wildcats, who entered the tournament as the South East Regional Champions riding a three-year win streak.
The game was close until late in the first half when the Wildcats intercepted the ball and tossed a last-second touchdown for a 28-0 lead. 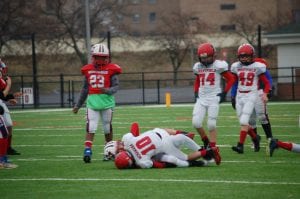 Westfield struggled to find any kind of rhythm in the second half, turning the ball over several times, allowing the Wildcats to drive a short field. Florida prevailed 46-0, handing the Junior Bombers their first loss of the season.
Northeast Pensacola advanced to the national championship game, but fell to the unbeaten Louisville Jags, winners of 32 straight.
Next up for Westfield: the Reisterstown Mustangs from the Baltimore, Maryland area, carrying a record of 12-0. The Mustangs had beaten opponents by such scores of 52-0, 58-0, and 65-0.
Against the Mustangs, Westfield’s offense was led by quarterback Jaxson St. Pierre, who rushed for 94 yards and threw for 120 yards on 7-of-9 passing, including a 45-yard touchdown to running back Lucas Guay (80 yards rushing).
It was Westfield’s defense that would be the driving force to the victory though.
Linebackers Cooper McNamara and Jovanny “Cheese” Corchsese had multiple tackles as did defensive linemen Thomas Lenston and Kayson Nawskon. Defensive ends Ethan “Beef” Connors and Jeremiah Charbonaue also had big games, pressuring the opposition’s quarterback. Defensive backs Drew Masters, Nick Guay, Phoenix Whitaker and teammates St. Pierre & L. Guay made huge tackles in open space against the speedy backs from the Mustangs. 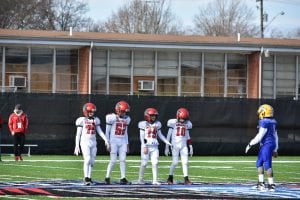 D-lineman Nick Gauger made a key fourth quarter fumble recovery. The play that helped seal the win though was a safety. The Mustangs attempted run a jet sweep but Thomas Lenston blew through a double team block and made a great tackle in the end zone.
Westfield’s offense needed just two first downs – one each from St. Pierre and Guay – to run the game clock out.
Westfield ended its season 13-1. Three of those victories came against previously unbeaten teams, hailing from all parts of the country.
“It was a once in a lifetime experience for the players, coaches and families,” Westfield coach Troy St. Pierre said. “They cannot express how grateful they are to the Western Mass community, especially Westfield.”
“The support and donations that was shown in just over a week was amazing,” he added. “This trip would not of happened without the community.” – Courtesy of Westfield Youth Football