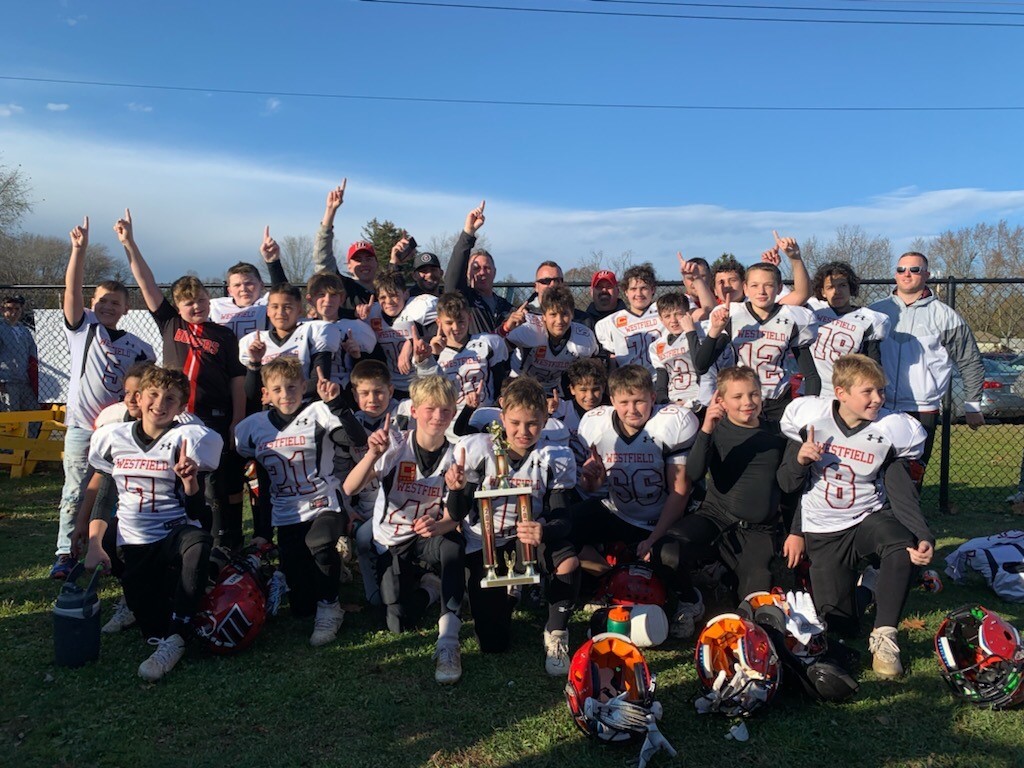 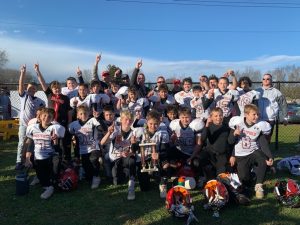 WESTFIELD – The Westfield Youth Football Junior Bombers have been more picture perfect than the foliage in the northeast this fall.
Westfield came away with another dominating effort, shutting out Wilbraham 14-0 in the Super Bowl Saturday to become champions at East Longmeadow High School. The Junior Bombers improved to 10-0.
Westfield opened the game with a long, time-consuming drive that ate up a good chunk of the first half and culminated in a quarterback keeper from Shane Scott Smith that resulted in a touchdown. Jase Castell kicked the extra point through the uprights for a 7-0 lead.
The Junior Bombers played their usual dominating defense. Gavin Topar forced a Wilbraham fumble on their first drive that was recovered by David Cross. Scott Smith also intercepted a pass late in the first half.
In the second half, Westfield’s defense tightened its grip again when Caleb Purdy sealed the right edge for a key stop. The Junior Bombers took a commanding lead when Castell broke off a 66-yard touchdown run.
“These kids are a special group,” Westfield Junior Bombers head coach Tony Purdy said. “That doesn’t come around very often.”
Westfield outscored its opponents by a whopping 239-6, easily surpassing everyone else in the division with the highest scoring offense and top defense throughout the regular season, playoffs, and Super Bowl.
“Westfield has always had a successful program but this group has set the bar higher than others in the past,” coach Purdy said. “A perfect 10-0 season … is very difficult to accomplish. This team has scored more points than all the other teams in our division … and only let up one touchdown. …That is unheard of.”
The only touchdown that Westfield let up all season came on the final play of the season opener against Chicopee, a 40-yard sweep down the sideline.
“Our defense was just great this year,” coach Purdy said. (Our players) track the ball well. Our offensive line, defensive line has some big boys and are athletic. We have a lot of great athletes.”
One of those such athletes was defensive captain Gavin Topar, who led the defense all season long. “The other kids fed off of him,” coach Purdy said.
As for Castell, he rushed for an astounding 25 touchdowns.
This is not the first time though that these footballers have enjoyed remarkable success. Two years ago, as Pee Wees, this same group won the Super Bowl. The city’s entire football program, for that matter, is booming in the Whip City.
Westfield’s Pee Wee team, led by head coach Sergio Bonavita, also went undefeated to earn a trip to the Super Bowl. Unfortunately, the Pee Wee Bombers lost a heartbreaker to Wilbraham Saturday, 6-0.
“The Pee Wees also put up some incredible numbers of their own and deserve the same recognition,” coach Purdy said.
There is no denying that.
Also, on Friday night, the Westfield High School football team stunned Plymouth South in a Division 3 state quarterfinal out east to keep their Super Bowl hopes alive.