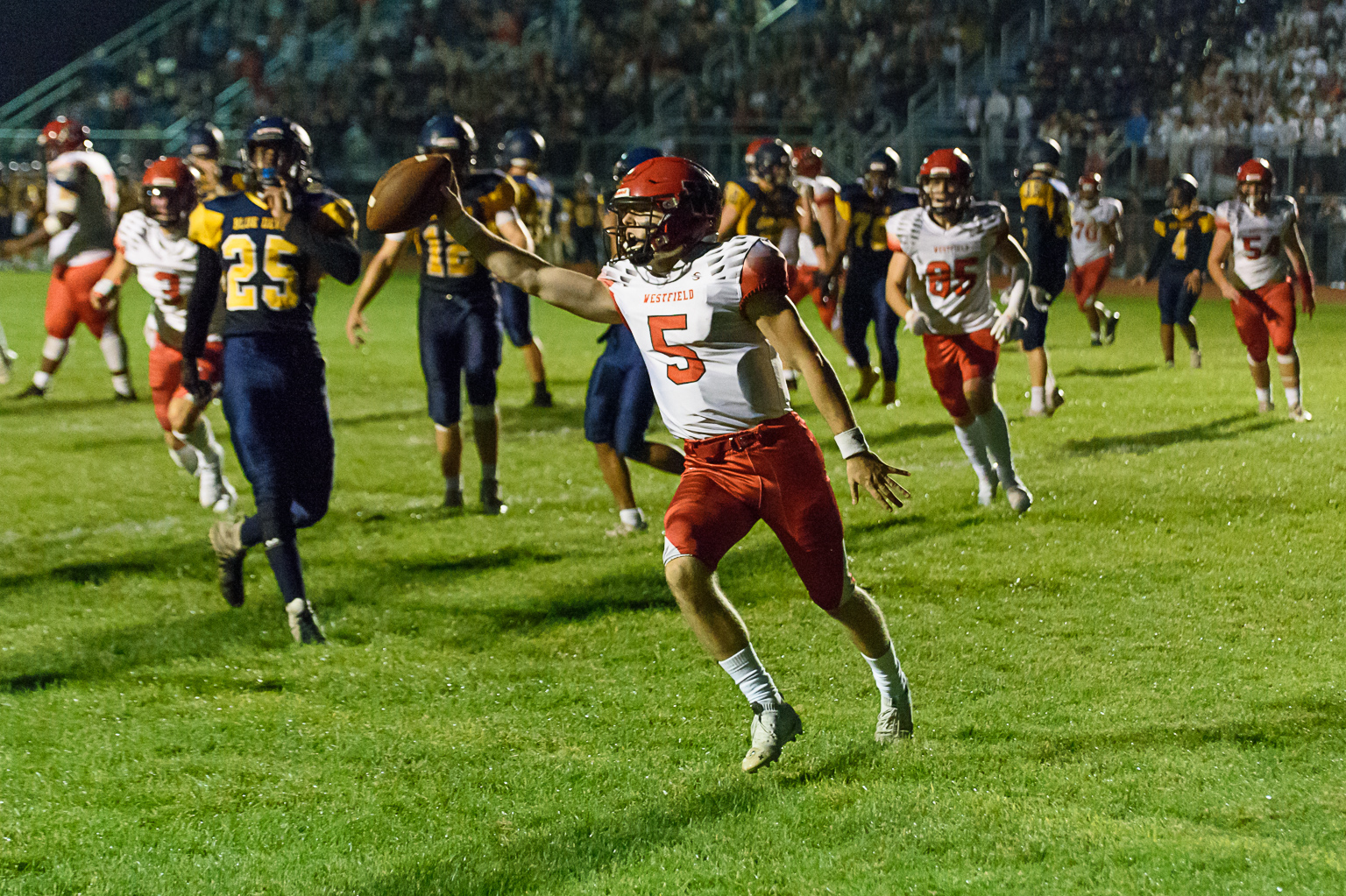 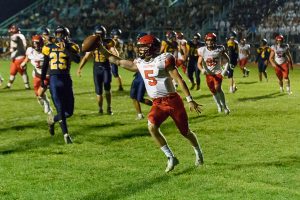 NORTHAMPTON – Westfield 79, Western Mass 0
The Westfield High School football team posted its second straight shutout to begin the 2021 fall season, shutting down Northampton 35-0 on the road Friday night.
Westfield senior quarterback Matt Adamites scored three touchdowns (2 rushing, 1 passing) and senior running back Ryan Cimini rushed for two touchdowns. Cimini totaled nearly 200 yards rushing for the second straight game.
Westfield (2-0) started strong from the opening whistle. The Bombers forced a punt from Northampton on the opening drive, took over on their own 3-yard line, and drove all they way to the Blue Devils’ 33-yard line before being stopped on fourth-and-one.
Westfield stopped Northampton again, started on their own 36-yard line, moved the ball downfield with a key run and pass from Adamites on successive plays. Adamites scampered into the end zone on a 6-yard keeper as time expired in the opening quarter. Bombers senior kicker Ian Dixon made the first of five straight extra points to make it 7-0.
Northampton opened up the second quarter with the ball but quickly turned it over on downs when Westfield sophomore Tyreek Mejia sacked the Blue Devils quarterback on fourth down.
Westfield began its next possession on its own 43 and moved the ball 57 yards. A key 25-yard run from Cimini set up an incredible fourth down conversion. Adamites completed a 37-yard touchdown throw to senior wide receiver Michael Collins on fourth-and-20 with 6:20 remaining in the first half. Collins laid out to make the diving catch.
The second half featured much of the same.
Adamites rushed for a 19-yard touchdown on Westfield’s opening drive of the second half. Early in the fourth quarter, Cimini rushed for a 19-yard touchdown. Cimini capped off the Bombers next drive with a 40-yard score.
The only drama left in this one was whether or not Westfield would complete its second straight shutout. The Bombers walloped the Amherst Hurricanes in their season opener, 44-0, but were tested in the waning seconds against Northampton.
Westfield’s shutout bid was in jeopardy late. Northampton nearly scored on a kickoff return but a shoestring tackle from a special teamer tripped up the Blue Devils kick returner at midfield.
Still, Northampton managed to move the ball into the red zone after drawing a pass interference penalty on the game’s final drive. The Blue Devils got to the 2-yard line but were stopped on fourth down.
Westfield burst into celebration. The Bombers will wrap up its two-game road next Friday night against Pittsfield at Berkshire Community College at 5.

Rams, Spartans battle to tie
Southwick 1, East Longmeadow 1
Although East Longmeadow had players out on green and yellow cards, the Spartans managed to tie the Southwick Rams.
East Longmeadow scored the first goal in the first quarter with less than a minute left. Southwick regrouped to score six minutes into the second quarter when Avey Glynn found Alyssa Jacobs for the game-tying goal.
With the intensity level raised in the second half, both teams found chances but failed to find the back of the net.
Southwick goalie Ezri Johnston made six saves.

Blue Devils silence Rams
Northampton 4, Southwick 0
Souhwick was shut out at home. The Rams return to action Tuesday against the Pacers at Szot Park in Chicopee. Game time is 4 p.m.