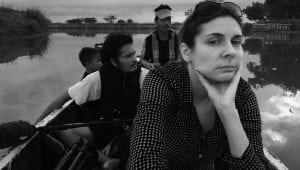 The film, which just had its world premiere in Toronto to rave reviews, will screen at the historic Mahaiwe Performing Arts Center in Great Barrington on Saturday, June 2nd at 1:30 pm. Director Cynthia Wade will participate in a conversation after the screening, as part of the 13th Annual Berkshire International Film Festival (BIFF) Tea Talk series. The screening is sponsored by the Berkshire Film and Media Collaborative (BMFC).

GRIT follows Dian, a young Indonesian girl who lost her home when an enormous tsunami of mud, caused by natural gas drilling, slammed into her village in 2006. Twelve years later, 16 villages lie buried under 60 feet of mud and the mud continues to explode every day.

A statue rises from the mud in a scene from Academy Award-winning director Cynthia Wade’s new documentary, “Grit.” (Photo courtesy of the Berkshire Film and Media Collaborative)

The film chronicles Dian’s awakening as a political activist as she had her community organize against the drilling company. GRIT was created in collaboration with the Sundance Institute.

About the Director: Academy Award-winning director Cynthia Wade has won over 50 awards for her films. Her documentary FREEHELD won the Oscar for Best Documentary Short in 2008; Wade was a lead producer on the 2015 fictionalized adaptation starring Julianne Moore, Ellen Page, Steve Carell and Michael Shannon. In 2013, Wade received her second Oscar nomination for her documentary MONDAYS AT RACINE. Her work can be seen at www.cynthiawade.com.