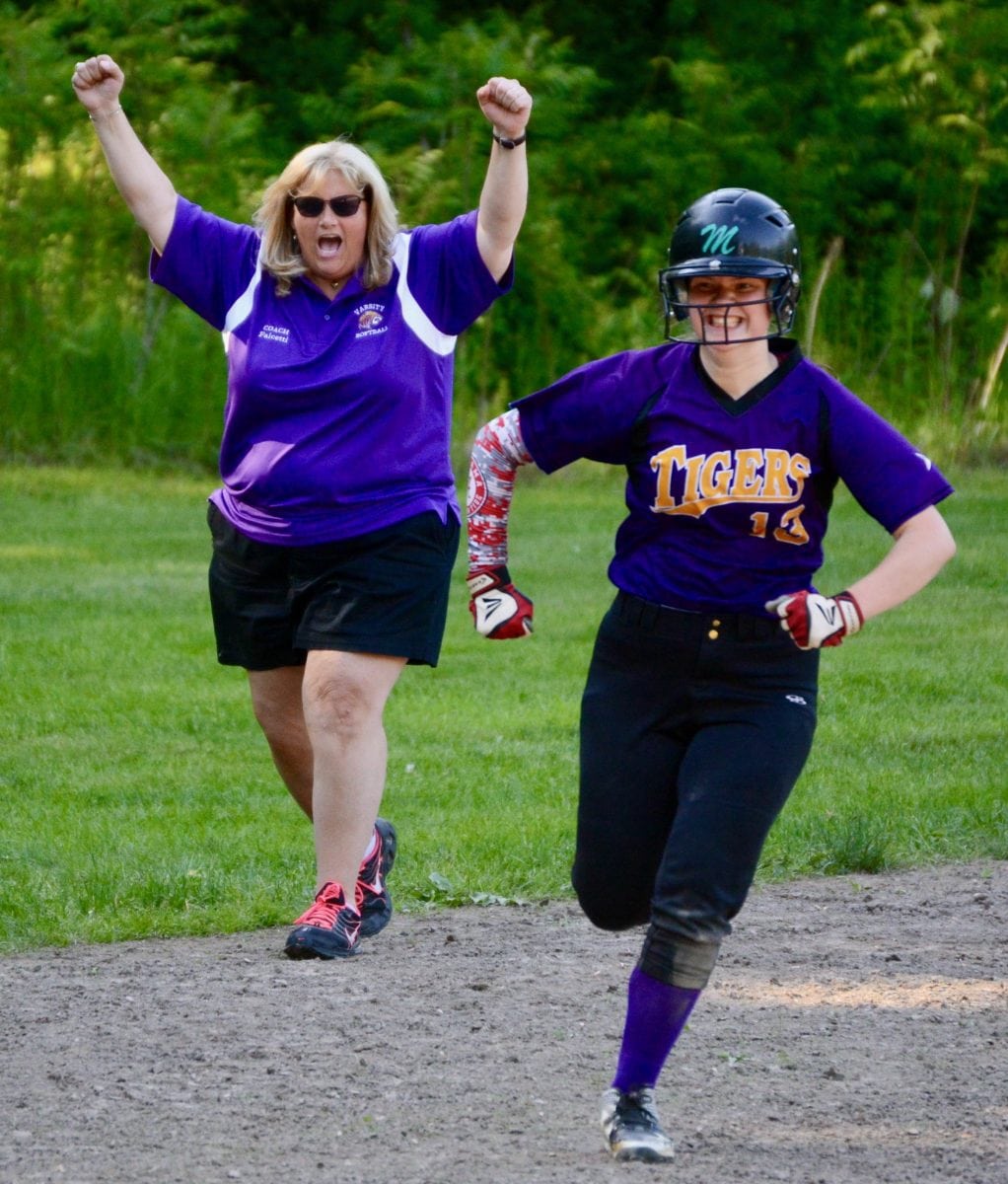 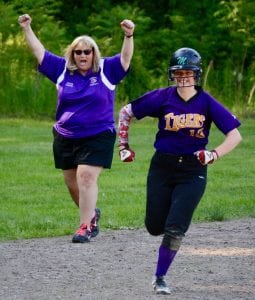 THREE RIVERS – If no one knew that Westfield Technical Academy senior shortstop Cheyenne Slack was approaching a milestone, she sure made it loud and clear.
Slack smacked two no-doubt home runs for her 99th and 100th career hits in Westfield Tech’s 9-4 win over Pathfinder on Thursday. The senior slugger’s heroics also helped the Tigers (7-5) qualify for the Western Massachusetts tournament.
“It’s honestly something I thought I’d never reach,” Slack said. “I’m really glad I hit it.”
Her 100th hit, a two-run homer in the sixth inning provided some insurance and sent her teammates and coach Deb Falcetti into a frenzied celebration at home plate.
The game was stopped briefly as she was awarded a plaque and the game ball after the feat. 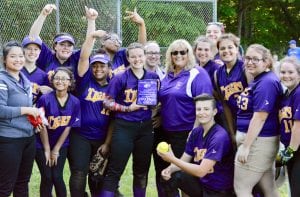 “Cheyenne is the all-around consummate player who is always here for the team,” coach Falcetti said. “She so deserves this accolade.”
Slack’s teammate also got in on the act, hitting a homer of her own – a solo shot – with one out in the sixth.
“It’s insane,” Slack said. “I hope we go further than we did my sophomore year. Like we did today, we’ve got to play hard. We’ve got to go strong; we’ve got to bring our bats. Our bats are kind of like our weakest thing because we’re kind of scared. We need to get over that and just go up there swinging.”
…And contributing web gems like they did against Pathfinder.
Slack made a nice double play in the bottom of the fourth inning, stopping a well-hit ball at shortstop, stepping on the second base bag and firing to first base. She also robbed Pathfinder of two more hits with two amazing stops, one of which came in the third and fourth innings.
Westfield Tech left fielder Jordyn Sanders made a leaping catch to rob Pathfinder of a potential home run for the first out of the seventh. The Tigers’ defense also produced a nice backhanded flip from the second base position for the second out of the seventh, and a nice stretch from the third baseman on a throw to first sealed it.
“To make the postseason and get recognition for one of our best players that by far has been on our team for years it means a lot,” coach Falcetti said.
“We don’t play for accolades. We don’t play for all the pomp and circumstance that you get with the other divisions, but we play with just as much heart and just as much confidence and we relish every win just as much as any other team.”

DOUBLE FEATURE: Moniz Ks 400th, hits 100th
Westfield 9, Longmeadow 0
Westfield pitcher Haley Moniz tossed a one-hit shutout to help secure a postseason spot for the Bombers.
For the record, Moniz recorded her 400th strikeout, fanning 15 Longmeadow batters and landed her 100th career hit.
Erin Gour hit a two-run double; Morgan Zabielski had a single and RBI, and delivered outstanding defense from behind the plate; and, the Bombers played error-free defense as a team.

LATE RESULTS – Wed., June 23
BASEBALL
Westfield 2, Minnechaug 1
Westfield rallied for one run in each of the sixth and seventh innings on the road to defeat Minnechaug.
Scotty Bussell went 2-for-3 with a triple, Mitchell Longley and Jack Blake drove in the only runs of the game, and Connor Cottengim and Baley Collier each scored for Westfield.
Aidan Dunn scattered tossed a three-hitter over six innings, striking out six and walking four. Mason St. Pierre struck out three out of the four batters he faced in relief, and gave up one hit.