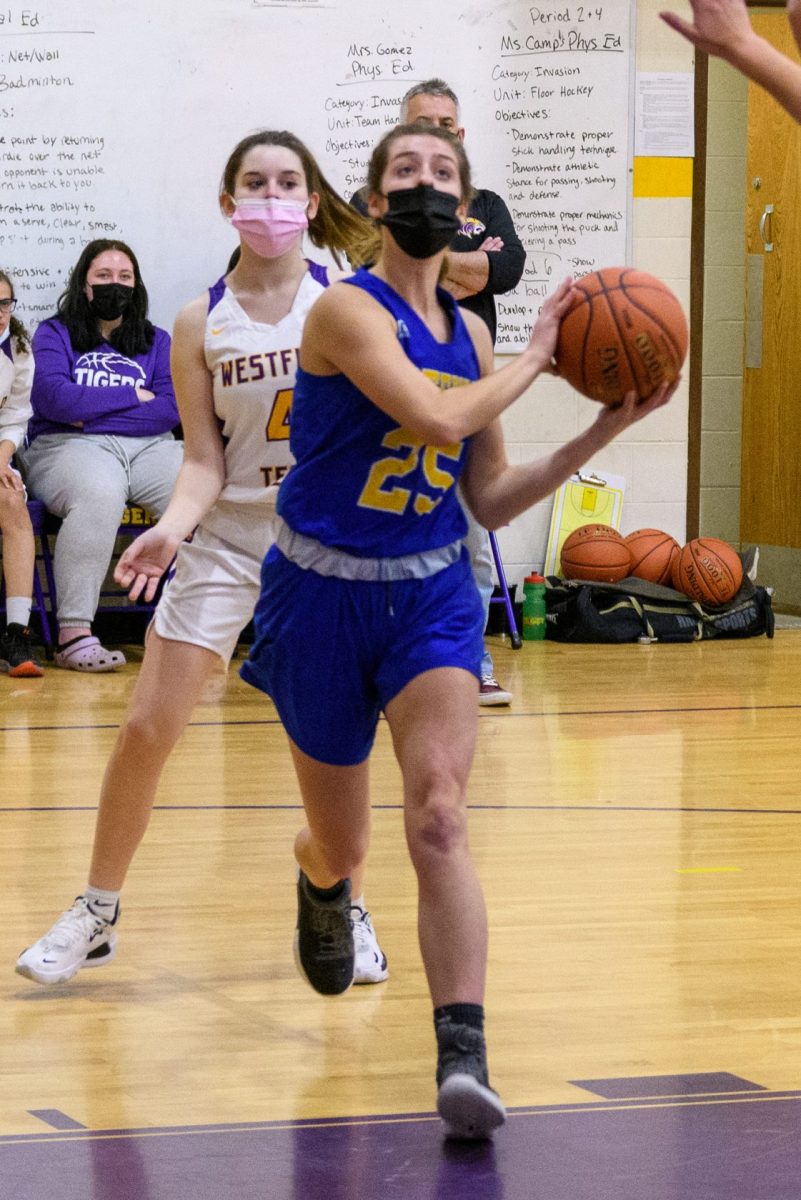 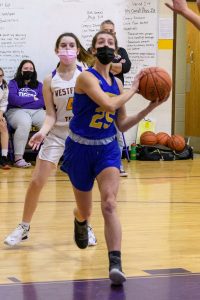 Gateway’s Steph Paiva (25) sees the open lane to the basket and goes in for a layup Thursday against Westfield Technical Academy. (BILL DEREN/THE WESTFIELD NEWS)

WESTFIELD – Last year, the Gateway Regional High School girls basketball team had only eight players in the entire program. Now, they are 21 strong.
“We have a whole JV team that we can build up one day here like us,” Gateway senior Stephanie Paiva said. “It’s really exciting that we went from such a small team to something bigger.”
That equated to a mammoth-sized victory for Gateway on the road Thursday as the Gators defeated the Westfield Technical Academy Tigers 41-8 in a girls basketball season opener.
Paiva led the way with 16 points. Her teammate, sophomore Kate Maynard, had 11.
Maynard wasted very little time getting her team off on the right fight. Gateway won the opening tip-off and Maynard streaked down the court like a bolt of lightning, converting a lay-up just five seconds into the contest.
A brief scoring drought ensued for nearly 2-and-a-half minutes until Maynard made a short jump shot with 5:21 on the clock. A minute later, Paiva made a nearly identical shot. Gateway took an 8-0 lead a minute after that when Nancy Mueller grabbed an offensive rebound and made the putback.
“I think it was pretty important (that we got off to a strong start) because that builds our confidence knowing that we go into something and if we run stuff right and we run it as we are shown then it can work out well for us,” Paiva said.
After going scoreless for the game’s first eight-plus minutes, Kayden Krupa made a strong dribble-drive that netted Westfield Tech’s first points of the game 29 seconds into the second quarter. With 5:01 remaining in the first half, Mia Slack swished a shot through the hoop to cut the Tigers deficit in half, 8-4.
Paiva went to work again, scoring an and-one with 4:41 left in the half. Mueller drained a 2. Amy Fisk made a free throw. Then, Paiva made another 2-point shot to cap the team’s second 8-0 run of the game. Fisk blocked a shot just before the half, allowing Gateway to force a Westfield Tech 30-second violation.
Westfield Tech tried to make it a single-digit deficit when Slack made a 2-pointer early in the second half. Gateway held a 16-6 lead. It was the closest the Tigers would get.
Maynard responded with a strong drive to the basket, finishing it off with a made layup. It was the beginning of a 10-0 run that culminated with a Fisk 3-pointer.
Adrianna Dent banked in a 2-pointer with 21 seconds left in the third quarter, but it was the final points that Westfield Tech would get. Gateway closed out the fourth quarter with a 15-0 run. Seven of those points came from Paiva, who made 2-of-2 from the free throw line, a lay-up, and a second and-one.
“I think we work so well as a team,” Paiva said. “We communicated, clearly, on the floor and I think that really helped. …I think it is important just to encourage each other because it can only get better from here.”
Gateway had just seven players active for the game due to some taxi squad players practicing with the JV unit. Westfield Tech’s squad may have outnumbered the Gators playing in Thursday night’s game, but the Tigers just could not scrape together any momentum.
“I have a lot of novice players that have never played basketball before and it showed,” Westfield Tech girls basketball coach Ron Nadeau said. “They had a lot of heart tonight and they had a lot of commitment and they played all the way to the end. I was really excited with their effort level and I was very excited that they never got down on themselves.”
The Westfield Tech girls basketball team has been through quite the challenge of late. For starters, a number of players on the team typically enter the program having never played the sport in an organized fashion. Then, combine that with the challenges created by the pandemic and the hurdles are unending.
“I had difficulty just getting kids to come to practice,” coach Nadeau said. “We’ve had as little as three kids so it’s difficult to teach them anything if they’re not there, but they’re starting to understand the commitment and they’re starting to work toward the team goal. I’m pretty excited about what I saw tonight.”
Both teams return to action Monday night. Westfield Tech travels to Hampden Charter School of Science with tip-off set for 6. Gateway hosts Baystate Academy Charter Public, beginning at 6:30.