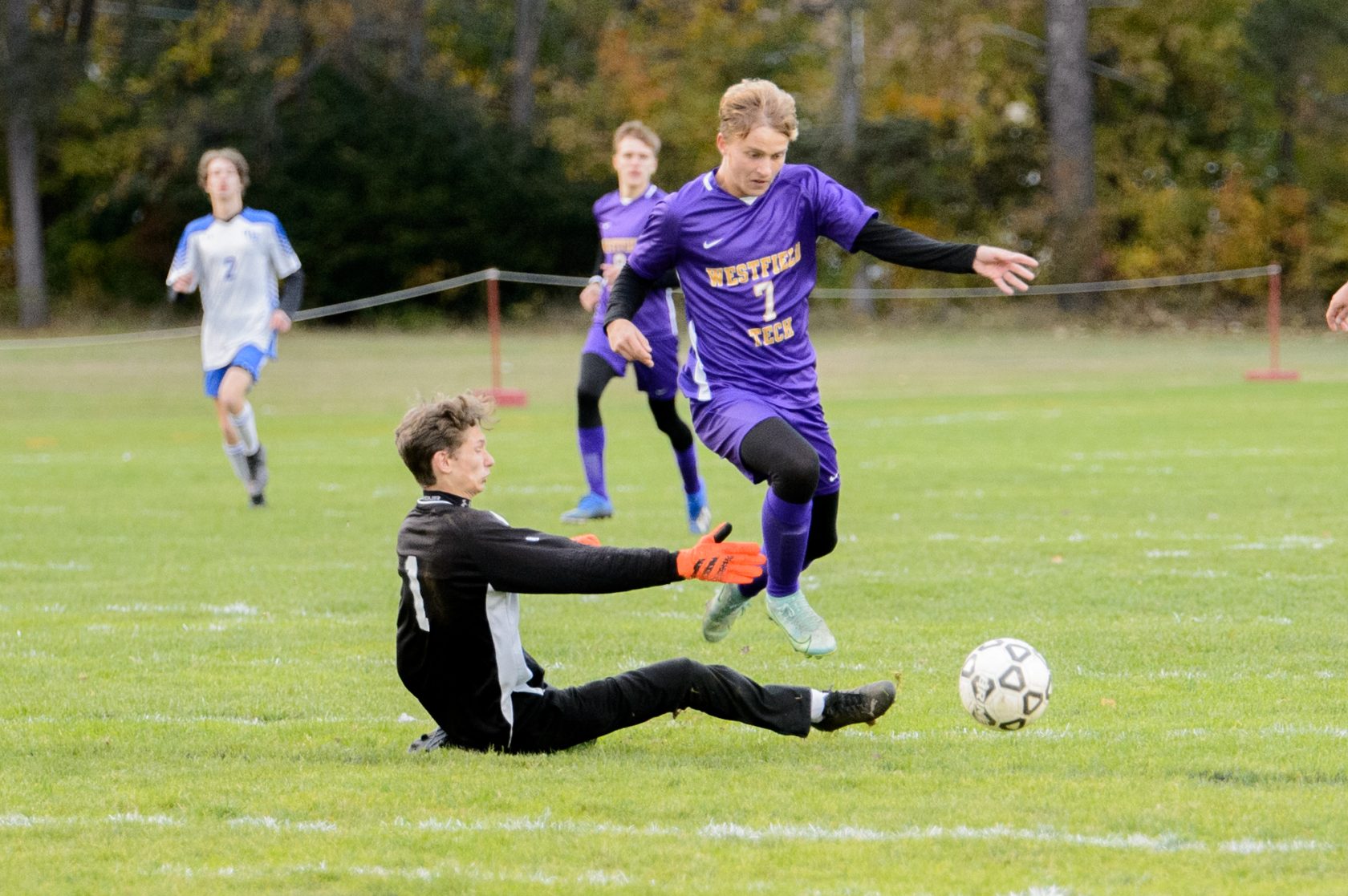 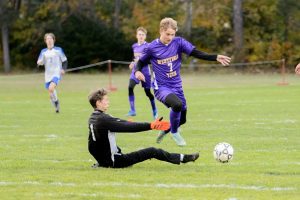 Westfield Tech’s David Bulatov (7) almost scores his second goal of the half as he beats the goalie, but the shot was just wide of the goal. Bulatov scored twice in the Tigers’ 3-0 shutout. (BILL DEREN PHOTO)

WESTFIELD – If the Division 5 boys soccer state tournament opening round game between No. 31 Westfield Technical Academy and No. 34 Upper Cape Cod is any indication, the undefeated Tigers show no signs of slowing down.
Westfield Technical Academy took the opening kick-off and ran with it. David Bulatov scored 16 seconds into the preliminary round game, added a second goal in the seventh minute, and helped set up a second half goal as the Tigers shut out the Upper Cape Cod Technical Rams 3-0 Thursday night at Bullens Field.
“Coach (Kyle Dulude) told us to bang them right away,” Bulatov said. (Upper Cape) had a long bus ride so their legs were probably cold and we just wanted to go at them right away and really give them no hopes for the game.”
That game plan worked to near-perfection.
Immediately after the opening whistle sounded, Bulatov took a through ball from Adam Strycharz, split the defense right down the middle on a run to the goal, dribbled into the box, and struck the back of the net.
Six minutes later, Bulatov took a ball from Mason Jacquier, shifted slightly to the side deep in the box, took a few steps and shot it into the corner of the net for a 2-0 lead.
Bulatov also uncorked the first shot in the second half, almost scoring on an identical play similar to his first goal. This time though, the Upper Cape goalie corralled the ball.
In the 48th minute, Westfield Tech’s Jon Vella nearly curled a corner kick into the net all himself, but the ball went just wide. The Tigers (16-0-3) secured the victory in the 61st minute when Owen Carpenter crashed the box, collected a rebound and delivered a well-struck kick for the team’s third goal.
The game’s final score, which came with 19:18 remaining on the clock, was set up by a shot from Bulatov. Bulatov smacked the right post with a hard-hit ball. The ball ricocheted sharply to Carpenter, who provided the insurance.
“Coach has really been giving us motivational speeches before the game,” Bulatov said. “I think that definitely put us in the right mindset to go through.”
Westfield Tech goalie Liviu Mocanu earned the shutout in net.
With the victory, Westfield Technical Academy advances to the Round of 32 where they will face the tournament’s No. 2 seed, Millis (10-5-3), at Milford High School Saturday at 6 p.m.
“(Our players) are excited to play more soccer,” coach Dulude said. “It’s been an interesting season. We just need to keep working hard, letting the pieces fall where they fall.”
It appears that Westfield Tech has this postseason puzzle figured out for the most part right now.
“It’s going to take a lot – – it’s the number two team. It’s going to be a hard fight but nothing is impossible and we have nothing to lose,” Bulatov said. “Hopefully, we can keep going through fighting with the same mentality that we’ve been going through. …We want to just go out there and play our best.”

DIVISION 4 BOYS SOCCER TOURNAMENT
OPENING ROUND
No. 27 Mahar 7, No. 38 St. Mary’s 1
Mahar (5-12) eliminated St. Mary’s from the D4 tournament with a convincing victory at home. It was only the fifth win of the season for the Senators. The Saints finish the year 14-4-1 and produced a 50-goal scorer in Jonathan Baillargeon.

DIVISION 4 FIELD HOCKEY STATE TOURNAMENT
PRELIMINARY ROUND
No. 33 Southwick 4, No. 32 Sturgis Charter West 1
Southwick (9-7-3) rallied from a 1-0 deficit, scoring four unanswered goals to defeat Hyannis-based Sturgis Charter West (3-7-3) on the road in the state’s first-ever D4 field hockey tournament.
Devan Fox recorded a hat trick to lead Southwick.
“The team came out pumped up and ready to play,” Southwick field hockey coach Jenn Oakland said. “We have been working all season on having a ‘clean slate’ mentality and we were definitely in that mindset. We didn’t let the bus ride, the surface or the officials influence our play. Even though Sturgis scored first, we didn’t hang our heads and feel sorry for ourselves.”
Fox scored the game-tying goal during a penalty corner with a beautiful pass across the circle from Agnetha Furst. In the third quarter, Avey Glynn gave the Rams their first lead, cleaning up on a messy play in the circle by putting a ball from Fox into the back of the net. Fox followed that score up with a goal on a penalty corner with the assist coming off the insert from Marisa Coviello. Fox scored again – – her third goal – – during open play in the fourth quarter.
Southwick goalie Ezri Johnston finished with two saves.
“Every single player was working for each other on and off the ball,” coach Oakland said. “The way we played today is the way we have been trying to play all season. I am so proud of the girls for being focused and playing hard and working smart. …I believe that was the best game we’ve played all season.”
For their hard work, Southwick will be rewarded with a trip to Harwich to take on top-seeded Monomoy Regional Saturday at 4 p.m.

DIVISION 5 GIRLS SOCCER STATE TOURNAMENT
PRELIMINARY ROUND
No. 28 Holbrook 3, No. 37 Westfield Technical Academy 0
Westfield Technical Academy goalie Lindsey Deland had another stellar performance with 16 saves, keeping the Tigers (7-5-2) within striking distance of Holbrook (10-7-1) for two halves.
Deland and fellow teammates Allyssa Slack, Mia Slack, Caprice Allen, Iryna Shvyryd, Nella Kondratyuk, and Ella Dubavoya all received All-League recognition at the postseason soccer meeting earlier this week.
“Holbrook stepped up to all the 50/50 balls with speed and aggression combined with a solid passing game and a couple of really fast forwards,” Westfield Tech girls soccer coach Lyle Washington said. “Between those few things, my girls struggled putting shots on goal. It was an amazing season with a group of girls that will only get better next year.”