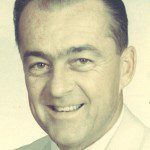 WESTFIELD – Alexander W. Lindberg Jr., passed away on Veteran’s Day, November 11, 2012 at Baystate Medical Center. He was born on September 29, 1925 in Chicopee to Alexander W. Lindberg Sr. and Anna (Harris) Lindberg, who predeceased him.
He was a graduate of Holyoke High School Class of 1943. On May 31st, the day after graduation, he joined the United States Marine Corps and proudly served his country in the 5th Marine Division during WW II and in 1945 was discharged after 8 months in the San Diego Naval Hospital in California. After discharge from the Marine Corps in 1945, he went on to graduate from the Saunders School of Radio Engineering in Boston, worked at Radio Station WHDH and then at CBS in the Marketing and Records Division, both in Boston. He then made a change from the music industry and they moved to Westfield where he served for 31 years as Executive Host for the Strathmore Division of International Paper Co.
In 1950 he married his Jr. High and High School sweetheart and they enjoyed 62 wonderful years together. They traveled extensively from the time they married and on retirement spent 17 6-month winters in Fountain Hills, AZ where they made many new friends. Alex was a member of The First Congregational Church of Westfield, a 55 year member of Mt. Moriah Lodge, a member of the Agawam DAV, a 35 year member of Shaker Farms Country Club in Westfield and was on all Holyoke High School Reunion Committees and taught Junior Achievement.
Alex leaves the “love of his life” and best friend, the former Phyllis Ann Smith; his sister, Marilyn Coughlin of So. Windsor, Ct.; his half sisters, Karen Miller of Seal Beach, CA, Susan Shipman of Arroyo Grande, CA and half brother, Perry Lindberg of Madison, AL; he was predeceased by his brother, Andrew of Manchester, CT. He also leaves his sister-in-law, Ida Lindberg; his close cousins, Peter and Judy Burhans of Barkhamstead, CT, William Burhans, Jr. of East Granby, CT; his wife’s cousin, Carolyn and Paul Henneman of South Hadley, many close friends including William and Rita Barnes of Fountain Hills, AZ, James Murphy of South Hadley, Gordon and Natalie Craig of Ludlow, Tracy Hermanson of West Springfield, Clifford and Beverly Gamble of Westfield and several nieces and nephews.
The family wants to thank his wonderful doctors, Dr. King, Babu, Pajouh, Reid and Diane Lacroix therapist in the Noble Hospital Pulmonary Rehab where his friends were like family. They also thank Dr. Hadro and his staff, and Rev. Marjorie Spillman at Baystate Medical Center for their care and attention.
Funeral services for Alex will be held on Friday, November 16, 2012 at 11:00 a.m. from the Firtion-Adams Funeral Service, 76 Broad Street, Westfield with burial to follow in Pine Hill Cemetery. A calling hour will precede the funeral from 10:00-11:00 a.m.
In lieu of flowers, memorial contributions may be made to Shriner’s Hospital for Children, 516 Carew Street, Springfield, MA 01104 or the First Congregational Church of Westfield, 18 Broad Street, Westfield, MA 01085.
firtionadams.com