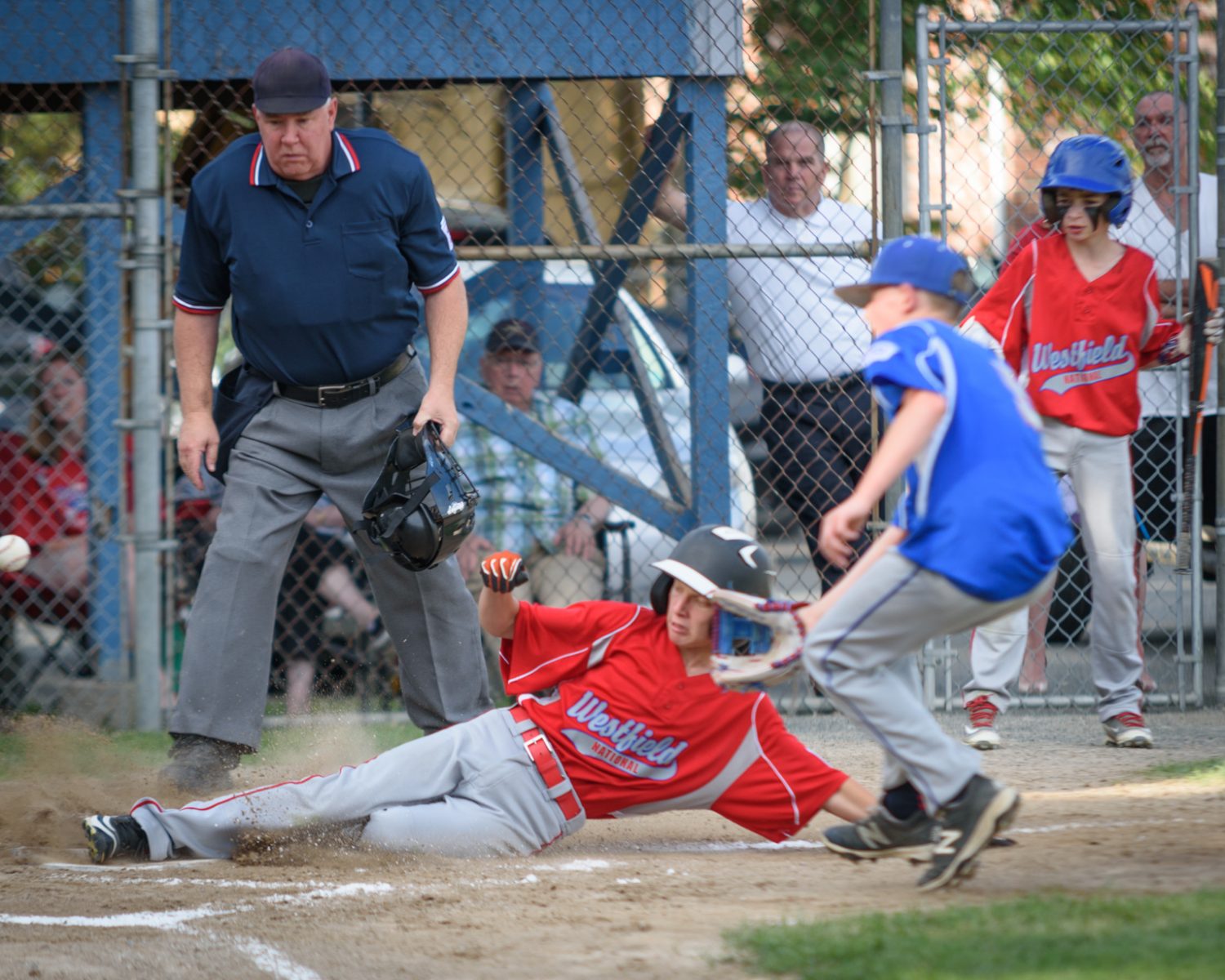 WESTFIELD – The Little League Baseball 11-12-Year-Old All-Stars district championship now goes through Westfield … American.
Westfield American rallied from a five-run deficit to defeat Westfield National 10-7 in a winner’s bracket semifinal Monday night at Ralph E. Sanville Memorial Field on Cross Street.
Westfield American advances to Thursday’s title game against the winner of Amherst-Westfield National, which will be played Wednesday at Papermill Field. The first pitch for both contests is set for 6 p.m.
“I told these guys from the beginning when we play in-town teams, everyone knows everyone’s pitching, and to expect a high-scoring game,” Westfield American manager Mike Raposo said. 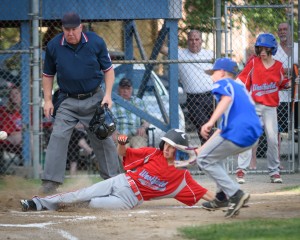 Westfield National came out swinging.
Dylan King got the festivities started with a base hit to begin the top of the first inning for the Nats. Dylan Arooth drew a one-out walk. The base runners advanced on a wild pitch. Clean-up batter Jake Jachym plated the first run with a scorching double to center field. Joey Calderella singled. Riley Sullivan walked to load the bases. Jared Noel hit an RBI single. Shea Byrnes drew a run-scoring walk. A wild pitch made it 4-0.
Westfield American managed to collect two hits in the bottom half of the inning (Jeremy McCormack, Alex Lacourse) but Nats starter got out of the jam unscathed.
Westfeld National increased its lead to 5-0 in the second with the aid of an infield error, a Dylan Arooth single, and a wild pitch.
Westfield American rallied.
Aidan King, Kareem Zaghloul, and Ryan Lapoint hit consecutive singles to load the bases with no outs for Westfield American in the home half of the second. A run-scoring error, fielder’s choice, McCormack RBI single, and Troy Hevey sac-fly RBI made it a one-run ballgame.
Westfield American continued to push back.
In the bottom of the third, Nick Montanaro hit a towering solo home run to right field to tie it 5-all.
“Montanaro’s homer gave us a lot of energy,” Raposo said. “Then it was just back and forth from there.”
McCormack (3-for-3, walk) continued his impressive offensive display missing a home run by inches when he smacked a two-out double off the top of the left field fence in the fourth. He advanced to third on a wild pitch, and scored on an error. Westfield American led, 6-5.
Westfield American would not let down.
After Hevey reached on an infield error, resulting in the go-ahead run, Westfield American drew consecutive walks to load the bases. Then, Aidan King ripped a line drive that took a tricky hop over the third baseman’s glove, resulting in two more runs. The lead was now three runs, 8-5.
Westfield National answered back.
An error and back-to-back walks loaded the bases with one out. Dylan King and Jimmy Cloutier followed with one-run singles to pull Westfield National within one run of a tie, 8-7.
Westfield American widened the gap in the bottom of the fifth inning with an insurance run plus-one. Colby Nadeau and Alex Lacourse hit RBI singles for a 10-7 advantage.
Westfield National threatened late.
Calderella and Sullivan singled to lead off the sixth, but American reliever Aidan King struck out the No. 3 batter and his defense turned a 1-6-3 double play to complete the save opportunity.
Said Raposo: “That play at the end is a good jumping block for our next game.”
Westfield’s manager also applauded the effort of Zaghloul, who came on to pitch nearly four innings of one-run ball – he retired 10 of 11 batters – before Westfield National’s two-run fifth.
“He kept us in the game for four innings,” Raposo said. “That was huge for us.”
TOURNAMENT UPDATE: The Westfield Babe Ruth Baseball 14-Year-Old All-Stars fell to rival Pittsfield 10-7 Monday night on the road. The loss effectively eliminated Westfield from the field … Westfield Post 124 finished the regular season 10-5, and swept Easthampton 2-0 (14-2, 5-4) to advance to the second round of postseason play. Post 124 will begin the next round Wednesday.