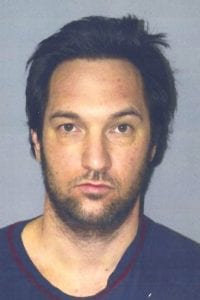 WESTFIELD – A Connecticut man believed to have robbed the TD North Bank branch office at 60 Main St. on Feb. 11 has been arrested after allegedly robbing a Webster Bank location in Glastonbury, Conn.
Det. Lt. Stephen K. Dickinson, who traveled to Glastonbury earlier in the week, said in a recent interview that Geoffrey A. Shapiro, 39, of 431 Denslow St., Windsor Locks, had been arrested after an investigation into a bank robbery there.
Dickinson explained that the suspect had unwittingly parked his get-away car very near a security camera before he walked into the bank and presented a note claiming to have a gun and demanding cash.
The robber in Westfield did the same thing inside the bank and, Dickinson said, wore the same jacket before he fled with about $500.
Dickinson said that Shapiro is believed to have also robbed a bank in Simsbury, Conn., on Feb. 9, wearing the same jacket and the same hat that he wore in Westfield. In Simsbury, the robber showed a gun, placing it on the counter during the robbery.
In Glastonbury, police viewed video which showed Shapiro walk away from the car he parked before the Feb. 21 robbery and were able to read a registration plate on it. The car was found to be registered to a Windsor Locks woman who was subsequently found to be Shapiro’s mother .
The suspect was not initially found at his mother’s address but he returned later and was arrested, Dickinson said. A warrant was executed and investigators recovered the jacket and hat he had been wearing as well as a gun.
Dickinson said that Shapiro’s motivation appears to be unusual.
He said that Shapiro has “zero criminal history” and does not seem to be seeking money to buy drugs. Instead, Dickinson called him schizophrenic and said “the reason he’s robbing these banks is to get money to get (imaginary) stalkers off his back” and to quiet the voices he hears.
Dickinson said that the case has been taken over by the FBI, not only because the crimes are in more than one state but also because, he said, the federal system has better options for caring for prisoners with mental issues.