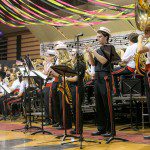 WESTFIELD – The Westfield High School POPS Concert, “20/20 Vision,” led by Band Director Patrick Kennedy and featuring the concert and jazz bands is March 13 and 14 In the school gymnasium.

Doors open at 7 p.m., and the concert begins at 7:30 p.m. Tickets are available at the door: $10 general admission, $5 senior/student.
The theme for this year’s POPS Concert is “20/20 Vision: Eye Tunes Through the Years.” There will be a variety of music with eyes or seeing in the lyrics. “Eye” inspired tunes include Eye of the Tiger, the Look of Love, and a Salute to Ol’ Blue Eyes, featuring some of Frank Sinatra’s biggest hits.
“Lots of different genres will be represented,” said Jennifer Thielen, president of the Westfield High School Band and Orchestra Parents (BOP), adding, “It’s a lot of fun, and a big historical evening.”
The concert will begin with the Star Spangled Banner, followed by the classic American march Burnished Brass. “This song was performed in the 1967 Pops Concert and is our tribute to all of the student musicians that have played in the Pops Concert over the years,” said Kennedy.
The program will also feature the Dixieland Band, solo and small group performances, light band classics, pop and jazz numbers and the traditional grand finale, “Sentimental Journey.”
Thielen said the funds raised from the ticket sales, concessions, which include popcorn and drinks, and sponsorships go towards the band’s trip to Washington, D.C. in May, the family picnic at the end of the year, and to maintain and update uniforms.
“It helps a lot of different things in the organization,” Thielen said.
The concert will be dedicated to Catherine “Kay” Ward, who passed away in January at the age of 94. Kay Ward and her husband Doug began teaching instrumental music in Westfield in 1948 until their retirement in 1984. Doug Ward was the WHS band director with the vision and the drive to begin the Pops Concert tradition in 1953, and Kay and Doug created the school’s modern-day instrumental music program, according to Kennedy.
“We are proud to carry on so many of the traditions that they put in place,” Kennedy said.