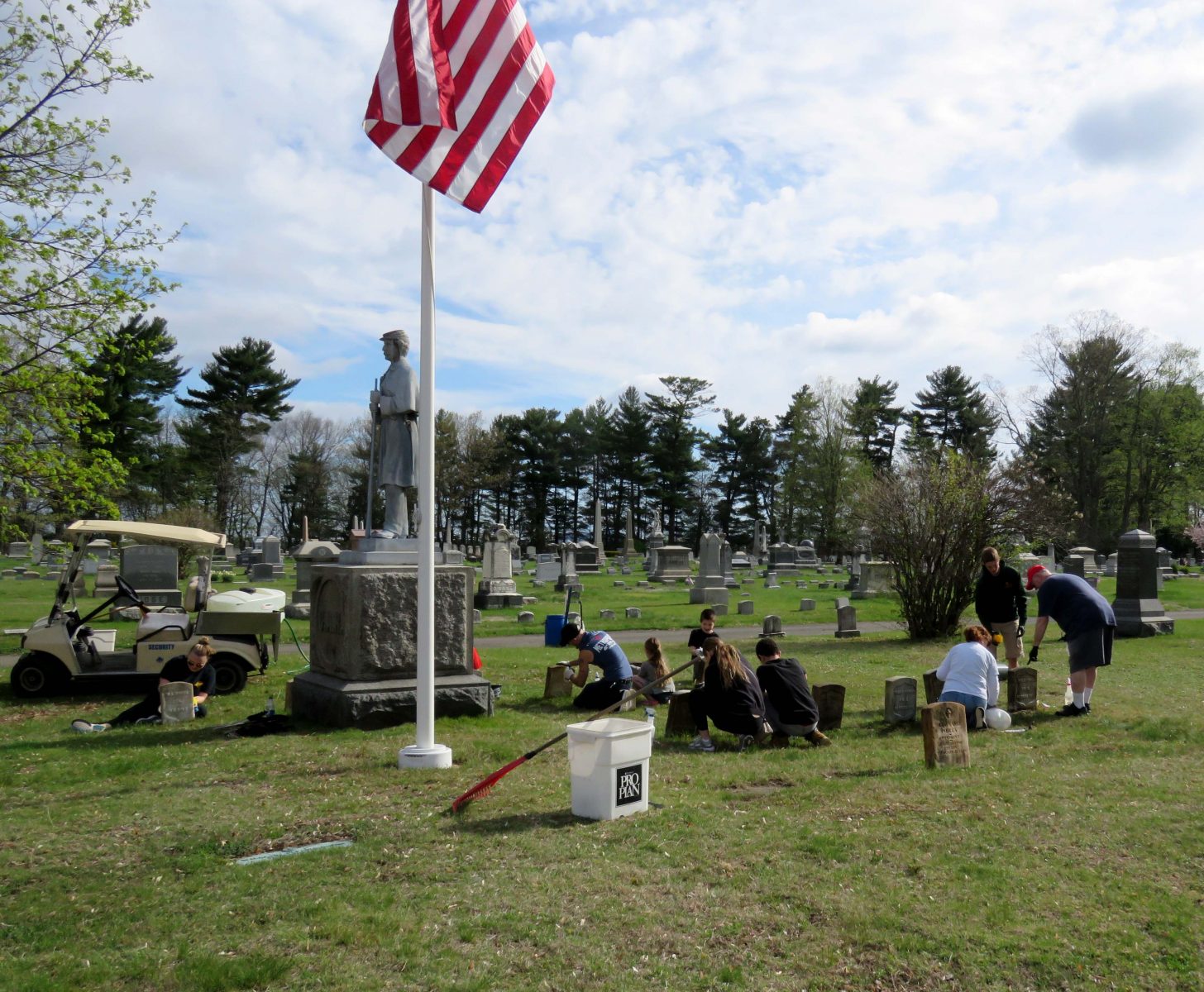 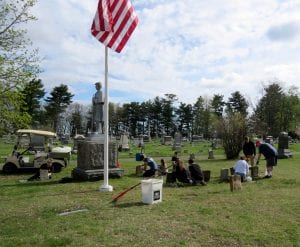 Volunteers from last year’s headstone cleanup in May. They can be seen applying D2 to the stones to remove the stains. (Photo submitted)

WESTFIELD- The American Legion Post 124 and the Friends of Pine Hill Cemetery will be holding another headstone cleaning day Sunday at 8:30 a.m. in an effort to preserve the monuments in the 175-year-old cemetery.

Gene Theroux, Past Commander of Post 124, said that Sunday’s cleanup ahead of Memorial Day will have two major tasks. They will be cleaning the head and footstones of veterans interred at the cemetery, and they will be resetting and pluming the stones of American Civil War veterans abutting the Civil War monument. Theroux added in a statement that volunteers would be welcomed. Any participants should meet at the Grand Army of the Republic Civil War statue in the cemetery.

“The objective of the May 5th cleaning day will be to clean as many WW I veterans headstones and footstones as we can,” said Theroux’s statement, “In addition to the WWI headstones, footstones, the volunteers will clean Civil War headstones, cenotaphs, Gold Star Mothers monuments and other historic memorials.”

The cleaning of the stones is done with a product called D2. The substance is used to removed biologically and air pollutant stains from the materials commonly used for grave markers like stone and marble. It does not damage the stones in any way, but it does not begin working immediately. Dale Dickson, Pine Hill Cemetery’s Superintendent, said that D2 will slowly remove the stains after it is applied and scrubbed with once.

“The stone will begin to slowly resemble what it looked like when it was brand new,” said Dickson in October, when she was seeking more volunteers to clean the cemetery’s out of shape head stones.

Theroux said that the cleanings of the head stones is done year-round by volunteers such as himself or other members of Post 124. In addition to cleaning, however, Theroux also undertakes an effort to document the headstones and the information that can be gathered from them. Theroux, whose family military ties date back to the American Revolution, uses a website called findagrave.com to update the headstone information in Pine Hill and other local cemeteries.

“Pine Hill has so much history,” said Theroux before Veterans Day last year, “Every time I go in there, I find someone new and interesting and I research them.”

The Civil War monument in the area Theroux plans to clean and reset the stones in was gifted by Civil War veteran Edwin R. Lay in May of 1900. Lay and his three brothers are all interred or acknowledged in some way at the cemetery.