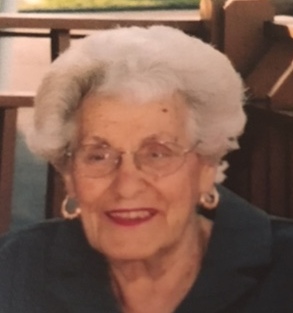 New Port Richey, FL – Angela Lucille (DeMartino) Skop Sheldon (1923-2017) passed away peacefully on Saturday, March 25, 2017 in New Port Richey, FL.   Angie was born on April 20, 1923 to Columba and Carmelo DeMartino in Hartford, CT.   She served in the Navy during WWII and married Walter Skop in 1946.   They had a child, Gail Marie but Walter passed away in 1956.  Angie married her current husband, Ralph in 1960 and they went on to run their family restaurant, The Glen, in Russell for many years. They ultimately retired to Florida.  As well as her daughter Gail, she leaves her son, Robin and his close friend Jessica, son Steven and his wife, Edite, 2 grandchildren, Danielle Sheldon and Shana Dubay, and one great grandchild, Evelyn.  Angela was predeceased by her sister Marie and her twin brother, Ralph.

Angela was a long time member of Our Lady of the Rosary parish in Russell and her strong Catholic faith was a major contributing part of her life.  She served enthusiastically on many of their committees and was especially fond of organizing and singing in the choir.  Angela was an accomplished singer and sang in many USO service-oriented productions.  She was a life member of the Russell Veteran’s of Foreign War Post #6645 Auxiliary.  She served as Auxiliary president and Massachusetts District #7 President.

Funeral arrangements are being handled by Morgan Funeral Home.  A service will conducted by St. Thomas Aquinas Church in New Port Richey, FL  at 12:00 pm on Saturday, April 1, 2017 with a reception to follow at Wood Trail Condominium Meeting Hall, Passport Lane, New Port Richey.  A service will be held at the Veteran’s Cemetery in Agawam, MA at a later date to be announced.  In lieu of flowers, memorial contributions can be made to the Gulf Side Hospice, 6117 Trouble Creek Road, New Port Richey, FL  34653